The Science-Minded Frat Boy’s Dream: A PhD in Beer-ology? 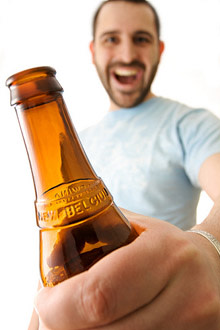 Have you ever tasted spoiled beer? Twenty-six-year-old Monique Haakensen once did. A few years ago, when the Canadian woman watched her brothers attempt to brew their own beer, the end result smelled like cheese and tasted awful. To figure out what caused the beer to go bad, Haakensen, a University of Saskatchewan graduate student, bottled the beer and brought it into the lab. Using a technique called polymerase chain reaction, she was able to discover two new genes (hitA and horC) that hastened the growth of bacteria in beer. Normally, bacteria don’t grow in beer, but when there’s a resistance-associated gene in the brew, certain strains can thrive. The most common bacteria that causes beer spoilage is lactic acid bacteria (LAB). Haakensen looked to see how LAB’s isolates, Lactobacillus and Pediococcus, grew in beer. By using this new form of DNA testing, Haakensen can now tell breweries how quickly their beer will go bad by checking for the presence of either hitA or horC. Rapidly growing bacteria has plagued the beer industry for centuries. The traditional methods of bacteria testing can’t tell the difference between benign bacteria and those bacteria capable of growing in beer. As a result, breweries often must hold onto batches of beer for months to make sure it doesn’t spoil. Thanks to Haakensen, this new technique could save Coors and Budweiser both time and money. Image: