The Science Is Still Gray on CTE

What exactly is chronic traumatic encephalopathy? 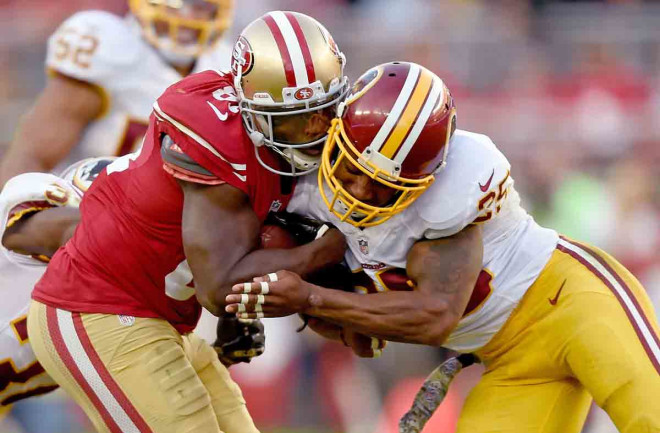 During the run-up to the Super Bowl in early February, physician Mitchell Berger, the lead consultant to the National Football League on the long-term effects of brain and spine injury, met with the news media.

Several reporters quarreled with Berger’s assessment of the neurological injury known as chronic traumatic encephalopathy, or CTE. Asked if playing football was “linked” to CTE, Berger hedged on the meaning of link. One newspaper called his statements “shameful.” Even as he spoke, the Hollywood movie Concussion was faulting the NFL for having disputed the discovery of CTE in a retired player 10 years earlier. A book about the controversy, League of Denial, had come out in 2013, and yet here the facts — as reporters understood them — were being challenged again.

Since 2005, CTE has been reported in more than 50 former football players, as well as in players of other contact sports and military veterans. Nearly all men, they’d suffered one or more concussions during their active years. In middle age their health declined and their lives fell apart. The medical case reports of CTE hinged upon autopsies of their brains, the subjects having died of other causes. There were suicides, too — not many, but enough to fan concern about the psychological effects of the condition.

Since 2005, CTE has been reported in more than 50 former football players, as well as in players of other contact sports and military veterans.

Berger is a brain surgeon; he chairs the neurosurgery department at the University of California, San Francisco. On Sundays he stands on the sidelines of NFL games, watching for players who have been “dinged” and lifting them from the game if he determines they’ve had a minor concussion. (Concussions leading to a loss of consciousness mean automatic removal.) The NFL has responded to what the media has called its “concussion crisis” by adding new rules and medical protocols to mitigate the consequences of the inevitable blows to the head. No doubt the reason for the ever-tightening response is the link — the league now agrees to use the word — between CTE and a player’s history of concussion, which may have begun in high school.

But Berger does have a point: What is meant by link? And while we’re on the semantics, what exactly is chronic traumatic encephalopathy? Not the football fan’s conception of a condition that periodically darkens the sports and obituary pages. What’s the CTE of neurology, the case definition of the disease under the harsh light of medical science? The answers aren’t as clear as we’ve been led to believe. Berger got in trouble with reporters for bringing up the inconvenient uncertainties — the gray matter, as it were — lying between the specialists’ tenuous grasp of CTE and the prospects for diagnosing, treating and preventing it.

CTE was originally characterized in boxers. Nearly every research paper on CTE starts by citing Harrison Martland’s 1928 description of “punch drunk” boxers, the poor fellows who staggered and trembled uncontrollably at the end of their careers in the ring. Martland, a neuropathologist, examined five such boxers, and he was sure that autopsies, if performed, would reveal brain damage. (Neuropathologists today limit their work to tissue samples and leave the assessment of patients to neurologists.) Not until the 1970s did pathologists collect enough cases to formally characterize CTE. They identified brain abnormalities in 15 deceased boxers who were reported to have been punch-drunk.

The Nigerian-born pathologist Bennet Omalu was the first to connect CTE to professional football. Omalu and colleagues published autopsy results of a retired Pittsburgh Steeler, Mike Webster, in 2005. Among the evidence, they pointed to amyloid plaques, which are unnatural deposits of amyloid protein, and neurofibrillary tangles and threads, which are microscopic aggregations of another protein called tau, rarely found in healthy brains. The NFL’s neurological consultant at the time, Ira Casson, immediately pushed back. He disagreed that this was a case of CTE. He said that Omalu’s description of Webster’s pathology was not the same as the scarring and structural degeneration that had been established for boxers.

In a normal scientific debate, a hypothesis advanced by one group of researchers will prompt criticism from another group, and the two will go back and forth, more or less politely, feeding new data into the debate until coming to an agreement. But this was about pro football — the stakes were too high, the money and passion surrounding the game too great. The angry narrative that emerged in the press had the NFL stonewalling the evidence and denigrating Omalu.

Although 23 years earlier Casson had done more than any other neurologist to sound the alarm about brain damage in boxers, in this instance, obstinately, he stuck to the other side. He got the nickname Dr. No for saying “no” over and over after an interviewer asked him if evidence linked concussions to depression, dementia and anatomical changes in the brain. It wasn’t just stubbornness, though: The doctor’s idea of the evidence was much stricter than the public’s. In reaction, Congress held hearings. As public outrage grew, a frustrated Casson resigned.

Omalu, hero of the movie Concussion, has never clarified CTE to the satisfaction of most neuropathologists. That job has fallen to Ann McKee and her group at Boston University. Thirteen years ago, McKee was autopsying Alzheimer’s patients when she came across the brain of an ex-boxer, and then another, and then an ex-football player’s brain. She detected a novel pattern in the tau-based neurofibrillary tangles (NFTs) on the slides. “I thought my career was to discriminate tau in aging,” she recalls, “but my career took a hairpin turn.” Since 2009, she and her colleagues have published a series of case reports of CTE in retired athletes and veterans.

Last year, the National Institutes of Health, with funds provided by the NFL, held what it optimistically called a consensus workshop, at which McKee and other specialists hammered out a definition. According to the criteria, CTE progresses in stages and can be distinguished from other neurodegenerative disorders by the location of NFTs. Specifically, the NFTs accumulate within cells near the blood vessels at the bottom of the sulci, the folded portions, of the cortex. There are other abnormalities supporting the case definition, but without tau in the cortical sulci, the other elements aren’t specific to CTE.

Teasing Out a Diagnosis

Is there consensus? Not yet. Critics of the Boston University team, most of whom are not associated with the NFL, have grudgingly gone along with the tau-based definition while raising a rash of other questions. Their core objection is that the post-mortem signs of the pathology are only vaguely correlated with concussions and clinical symptoms in vivo: what players actually go through during life.

Rudy Castellani, a neuropathologist at the University of Maryland, has been the lead author on several skeptical reviews of CTE. “In neuropathology we can’t say what a concussion is,” Castellani says. “Then, to use tau data to say there have been concussions upstream [earlier in time] and then downstream effects like suicide — I think relating suicide to tau is absurd. From a neuropathological standpoint we have enough difficulty, during life, diagnosing dementia and Alzheimer’s in patients.”

Why do the great majority of players who suffer repetitive concussions never develop the cognitive and psychological problems associated with CTE?

McKee’s Boston University colleague Robert Stern has a study underway to classify the symptoms and identify real-time biological markers of CTE in athletes. At UCLA, researchers have tested PET (positron-emission) scans as a diagnostic tool. But other uncertainties will be even harder to resolve. Why do the great majority of players who suffer repetitive concussions never develop the cognitive and psychological problems associated with CTE? Is there a quantifiable risk for the disease? That is, if concussions are comparable to a toxic exposure, what is the dose-response — the number and severity of impacts that drive the progression of the condition? What are the genetic factors and lifestyle factors, especially drug and alcohol abuse, that may aggravate or dampen the hazard? And since the clinical symptoms ascribed to CTE strongly overlap with the symptoms of depression and Alzheimer’s disease, to name just two confounders, how can related conditions be teased apart? Proponents acknowledge that CTE and Alzheimer’s can affect a single brain at the same time. This wrangling is only over diagnosis, which pushes questions about prevention and treatment further into the future.

“As the research goes forward, it will get more precise,” says McKee. A recent study applied the McKee criteria to a repository of brain tissue in Florida having nothing to do with professional football. CTE was detectable in about a third of the men who’d said they played contact sports, but it did not show up in matched controls, the men whose histories didn’t refer to activities where concussion was a risk. The gold standard is to track athletes and non-athletes forward through their lives and compare what happens to their behavior, cognition and brains. That research has begun, too.

The watchword is patience, often in short supply in a football stadium. McKee and her associates have been quick to publish a CTE finding when they diagnose it in a prominent ex-athlete. She does so, she says, because of the “urgent nature of this research. We need more funding and attention to the public health issue.”

But feelings of urgency can prompt mistakes. Take Todd Ewen’s story. Ewen, a 49-year-old former professional hockey player, a brawler on the ice, killed himself last fall. He was terrified of CTE, said his wife, and was sure he had it. An autopsy showed he didn’t. Something else was tormenting his brain.

[This article originally appeared in print as "Ahead of the Hit."]