The Room Suddenly Started Spinning, But This Was No Ordinary Case of Vertigo

Not all cases of vertigo are created equal. Was this woman's dizziness from a harmless inner-ear imbalance — or something much more serious? 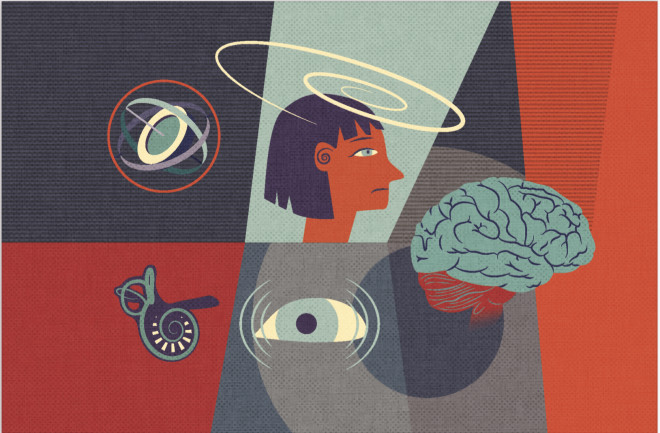 This article appeared in the June 2021 issue of Discover magazine as "Spin Doctor." Subscribe for more stories like these.

The stately woman in the buttoned-up nightgown looked on as Iris, my second-year resident, related the history.

“Ms. Baker is a 60-year-old in good health,” she began. “Only takes a blood pressure pill. Early this morning, the room suddenly started spinning and she retched once. Denies headache, neck pain, arm or leg weakness or vision change. Says her face feels tingly on the left. On the physical exam, she drifted to the left when I had her walk.”

“Any tingling or numbness on the right arm or leg?” I asked.

“Could be a Wallenberg,” I said.

She pursed her lips. “The actor?”

“Ha. Wallenberg, not Wahlberg. It’s a type of stroke. Lateral medullary infarct.” A stroke is caused by blockage or rupture of a blood vessel in the brain; an “infarct,” or infarction, is blockage caused by a clot.

“Never heard of it,” she answered truthfully.

At Ms. Baker’s bedside, I introduced myself then asked, “Any numbness or tingling over your right arm or leg?”

Gently, I pressed a needle onto the skin of her right biceps, then forearm. “Feel that?” I asked.

My snap diagnosis — that Ms. Baker had suffered a rare type of stroke in her lateral medulla — was looking shaky.

I probed both sides of her face. “Any difference between left and right?” I inquired.

“Left side seems duller,” she replied.

“Maybe a partial stroke?” I mused to Iris. “Wallenberg syndrome is vertigo plus loss of pain and temperature sensation on half the face and the opposite side of the body. Only her face seems affected. Another possibility: Vertigo can make you hyperventilate, which can also make you numb. I’d still get an MRI.”

“Easy,” I said ruefully. “You just need to figure out whether the cause is central or peripheral, brain versus inner ear, stroke versus positional vertigo. One of the toughest calls in neurology.”

Navigating three-dimensional space against the pull of the planet’s gravitational field demands finely tuned gyroscopes hitched to hair-trigger reflexes. Vertigo is what happens when these gyroscopes — or the nerves that carry their signals, or their relay stations inside the brain — misfire. Latin for “turn,” it is a dramatically unpleasant sensation that shapeshifts terra firma into a roiling, retch-inducing sea.

As a medical student, my first anatomy-lab glimpse of the inner ear’s gyroscopes left me dazzled. Nestled within the bony ridge just inside the middle ear, the three semi-circular canals protrude at right angles to each other off a central sac, the utricle, like handles on a surrealist coffee mug. Inside, a gelatinous fluid bathes hair cells primed to detect rotary motion. Turning your head left makes the fluid rotate clockwise relative to the hair cells. That triggers cells in the left ear to fire stronger signals — and those on the right weaker ones — into the vestibular nerve to the brainstem. Essentially, left and right gyroscope signals must complement each other to tell the brain which way it is turning so it can coordinate muscles throughout the body.

Linear motion is detected by the utricle and its partner bulge, the saccule. Here, the hair cells sport tiny rocklike particles, or otoliths, at their tips to amplify sway when the head accelerates forward or back. This sets up a curious and all-too-common problem: If an otolith floats out of the utricle to a semicircular canal, it can trigger the wrong hair cell. The mixed signal — one ear blasting, “We’re moving!” while the other whispers, “No, we’re not” — unleashes the whirling sensation of benign paroxysmal positional vertigo. Happily, the Epley maneuver, a series of head-turning movements, can diminish the vertigo by enlisting gravity to coax a wayward otolith back into the utricle.

Benign, however, does not apply to all causes of vertigo — notably strokes and tumors.

All that fine-tuning among inner ears, eyes, limbs, trunk and head — and between incoming sensory data and outgoing commands — takes endless crosstalk. The highways of the nervous system converge at the medulla, the lowest part of the brainstem, which sits atop the spinal cord. Less than an inch in diameter, it also lies in front of the cerebellum, the body’s coordination center that chatters constantly with the inner ears.

A stroke anywhere along those signaling pathways can cause vertigo by disrupting this cross-communication — and that all-important balancing act between left and right.

The trick is to tell the vertigos apart. Years ago, as a stroke center director, I reviewed more than a thousand cases. Vertigo proved our greatest challenge. Brainstem or cerebellar strokes often lack the arm or leg weakness, or speech deficit, that usually come with a “classic” stroke. This can make those cases devilishly hard to pluck out from the steady stream of benign vertigo patients.

Vertigo-inducing strokes are subtle, but uniquely dangerous. Within the cerebellum, a hemorrhagic stroke can quickly expand to crush the brainstem; an ischemic stroke can cause neurons to swell over the next 48 hours to the same result. Patients look mildly impaired, then abruptly die. In the tightly packed brainstem, a small stroke can quickly worsen if treatment is delayed.

Accurate diagnosis relies on tests of eye movement, limb coordination, and above all, gait. Problem is, when you have the whirlies, all you want to do is shut your eyes and lie still. Worse, the severity of the vertigo predicts nothing.

If a patient won’t (or can’t) walk, you can fall back on the eye exam. The gyroscopes help the eyes adjust to head movement. If one inner ear or its nerve goes out, then the eyes will drift to that side before being yanked back by the higher brain. The involuntary eyeball movement is called nystagmus. With a stroke, the central left-right integration system gets hit, so the nystagmus goes both ways.

Ms. Baker seemed pretty comfortable, so I asked her to look left. Her eyes jerked left for about 20 seconds, then stopped. To the right, they seemed normal. When she walked, she drifted left, but didn’t fall.

“If it’s a stroke, she looks pretty good,” Iris pointed out back at the doctors’ station.

The cerebellum sits behind the brain-to-spinal-cord motor and sensory pathways. The medulla is the intersection. Pure cerebellar strokes shouldn’t cause numbness or weakness. In the outer medulla, however, the input from the inner ear’s vestibular nerve happens to lie very close to pain fibers from the face and the opposite side of the body. Separate nerve bundles carry sensations of light touch and vibration, and others carry motor signals, but these lie toward the center. That makes it possible for a small arterial blockage to the outer lateral medulla to cause both vertigo and loss of pain and temperature sensation: Wallenberg syndrome, named after the German neuroscientist who first diagnosed it in 1895. The larger the stroke, the more nerve pathways get hit. Swallowing, speaking, and even heart rate may all be affected, but by then the diagnosis should be obvious.

It’s very important to catch the small strokes. I’ve seen radiologists miss Wallenberg syndrome. The medulla is only about three-quarters of an inch across, and the dot of abnormality on an MRI can be hard to see. A “negative” MRI can lead to inadequate treatment for a stroke that’s likely to get worse, so we specifically alerted our radiologist to look for it.

“The MRI will take some hours,” I told Iris. “Do you want to give aspirin in the meantime?” By decreasing platelet stickiness, aspirin prevents new, larger blood-clot strokes.

Four hours later, the radiologist called, “Your patient has a stroke. It’s there, infarct at the left lateral medulla. A Wallenberg,” she told us.

Iris smiled. “Not the actor, right?”

We filled Ms. Baker in. With the full-court press of stroke medications and physical therapy, she would likely do very well.

Tony Dajer is an emergency medicine physician in New York City. The cases described in Vital Signs are real, but names and certain details have been changed.