The rise and fall of great powers is stochastic

Long time readers know well my fascination with quantitative history. In particular, cliometrics and cliodynamics. These are fields which attempt to measure and model human historical phenomena and processes. Cliometrics is a well established field, insofar as it is a subset of economic history. But cliodynamics is new on the scene. At the heart of cliodynamics is the quantitative ecologist Peter Turchin. I highly recommend his readable series of books, Historical Dynamics, War and Peace and War, and Secular Cycles. Also, see my reviews ofthe first two books. With that, I am rather excited by the debut of Cliodynamics: The Journal of Theoretical and Mathematical History. Here's the description of the brief of the field and the journal:

‘Cliodynamics’ is a transdisciplinary area of research integrating historical macrosociology, economic history/cliometrics, mathematical modeling of long-term social processes, and the construction and analysis of historical databases. Cliodynamics: The Journal of Theoretical and Mathematical History is an international peer-reviewed web-based/free-access journal that will publish original articles advancing the state of theoretical knowledge in this discipline. ‘Theory’ in the broadest sense includes general principles that explain the functioning and dynamics of historical societies and models, usually formulated as mathematical equations or computer algorithms. It also has empirical content that deals with discovering general empirical patterns, determining empirical adequacy of key assumptions made by models, and testing theoretical predictions with the data from actual historical societies. A mature, or ‘developed theory,’ thus, integrates models with data; the main goal of Cliodynamics is to facilitate progress towards such theory in history.

The first issue has an article by Sergey Gavrilets, David G. Anderson, and Peter Turchin. Gavrilets is a familiar face. I know him from his work in evolutionary theory. The paper itself is a readable and plausible model of how "medium scale" societies rise and fall through conflict and consolidation. Basically the stage of human society described in Laurence Keely's seminal War Before Civilization; after agriculture, but before major literate state systems. Their basic method is to take a mathematical model with a tractable number of plausible parameters and run simulations which give one a sense of how it changes dependent variables of interest. Polities were modeled as being circumscribed hexagons; so they had six neighbors (instead of four which would be the case if they were squares). The area modeled had an "edge," and polities can exist in a flat hierarchical structure, or eventually aggregate so they exhibit rank order. Additionally, polities varied by economic productivity. Finally, there was a temporal aspect in that there was a potential conflict per generation where the probability of success was conditional upon the strength of the polity. Being more powerful increase the probability of victory, but does not guarantee it. Flukes do happen. The full model can be found in the paper, which is open access. The math isn't totally opaque, so I'm really not going to distill it down. You can swallow it whole. Rather, let's look at the list of parameters and statistics:

Most of the above variables are pretty straightforward. You should know that "complexity" refers to the levels of structure above the independent village. Presumably larger polities will have more complex structures, because they have to. Here's a figure which shows the dependency of the statistics over time on α, the scaling exponent. α = 2 a quadratic, while α = 1 linear. The area of a square grows as a quadratic function. In other words, there are greater gains to to the variable than a linear increase. 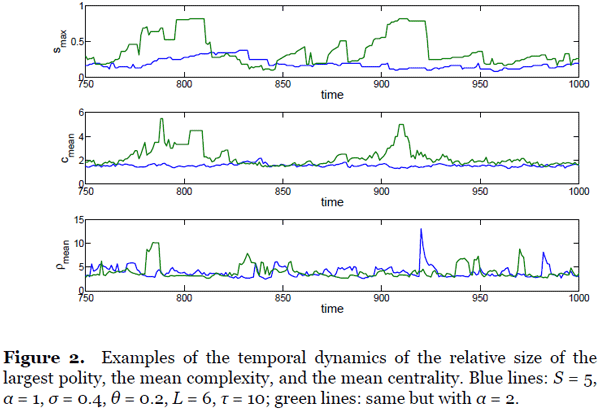 As you can see, maximum complexity and polity size seems to be strongly contingent upon the scaling exponent. This makes sense: the powerful get more powerful when the differentials are less swamped out by noise. Remember that the probability of victory in war is dependent in part on the scaling exponent, so when you increase the rate of victory as a function of greater power, you can have longer strings of "wins," and so more aggregation. 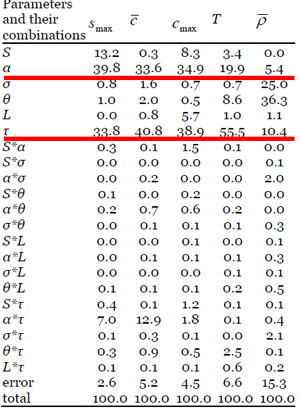 The table to the left shows the big outcomes from their simulations. I've underlined what you need to focus on. You can see that α and τ have the big effects on the properties of the system in terms of how they vary over time. Basically the greater returns there are on power differentials, the more large polities will emerge and flourish. This is intuitively obvious. Second, the other major factor which influences the growth and flourishing of large and complex polities seems to be the time of rule of a given chief. The other factors seem less important when it comes to maximum size or complexity, which are probably the two statistics of major interest to us. So does this tell us something we don't know? Qualitatively we know this already. The authors choose to focus on pre-Columbian North American societies as well as Sub-Saharan African and Oceanian ones. But they do give the nod to the "big name" civilizations too, which aren't really modeled here because their scale and complexity is outside of the purview of the parameters given here. To anyone who knows history the importance of the returns to asymmetric power and length of leadership are qualitatively obvious. In the first case, it seems almost tautological that if you reduce the "noise" in wars, and simply allow for victory to go to those who should win "on paper," there would be a "winner take all" dynamic. Small initial differences could much more quickly snowball into large differences. In some ways this is like evolution; increase population size and selection becomes more efficacious vis-a-vis stochastic forces (drift remains powerful to the same extent, as per neutral theory, selection simply has a larger footprint). 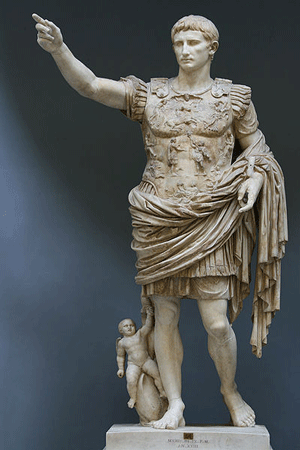 But what about the second variable? It is descriptively a well known fact that polities of massive scope and longevity tend to have a run of long-lived rulers at their inception. Consider the reigns of Augustus and Tiberius for Rome. Akbar, Jehangir, Shah Jahan and Aurangzeb for the Mughals. Kangxi and Qianlong for the Ching. Taizong and Xuanzong of the Tang. And so on. The question though is: are these long reigns the chicken or the egg? In other words, is the length of the reigns at the beginning of a political order simply a function of the endogenous factors which give rise to political units? Or does the length of rule itself impact the nature of the political system? These results seem to point to a causal role for the length of rule. I find this plausible. In the pre-modern era the death of even elites was to some extent a much more random affair than today. The death of Edward VI of England during his teenage years probably had a huge impact on the future trajectory of the culture of the British nation. That death occurred simply through an act of God in the era before modern medicine. Therefore, one of the stochastic aspects of polity size in the pre-modern era was probably simply the necessity for a random run of political leaders who did not die of illness (the second century famously had a run of Roman emperors who had no male heirs, so they adopted competent successors). The Sui-Tang dynasty of China perhaps hints at a dynamic where structural forces set the preconditions for the emergence of a large and stable polity, but personal rule means that there is still an element of stochasticity in terms of when the rise to power of that polity will occur. There were several "false starts" in the interregnum between the fall of the Latter Han and the rise of the Sui-Tang. This chaotic period was exceptionally long by the standards of later Chinese history. One model, which I find plausible, is that the institutions of Chinese society became more robust, and allowed for more rapid re-integrations after the collapse. But another model could be that the long period between the Latter Han and the Sui-Tang was simply due to a series of long odds. In other words, not only are large and complex political systems due to chance contingent upon the length of reigns, the perpetuation of fragmentation is also the inverse of that result. Finally, I think of the points that the authors are trying to make needs to be emphasized:

Our model provides theoretical support for a view that the formation of complex polities is “a predictable response to certain specific cultural, demographic and ecological conditions”...Conditions explicitly accounted by our model include warfare, circumscription, variation in productivity between different local communities, ability to generate surpluses, ability to delegate power, and restrictions on the growth of polities due to scalar stress. Once these conditions are present within a particular geographic area, the model predicts rapid formation of hierarchically organized competing polities partitioning available space. A striking feature of the model output is the fluid nature of “significant” polities, which continuously go through stochastic cycles of growth (both in size and complexity) and collapse. Growth is driven by successful warfare whereas collapse results from defeat in warfare, rebellion of subchiefs, or fragmentation following the death of the paramount chief. The lifetime of chiefdoms observed in our simulation – a few generations – is comparable to those identified by archaeological studies...The model suggests that the rapid collapse of chiefdoms can occur even without environmental perturbations (e.g., drought) or overpopulation.

First, the model has elements of randomness, and, determinism. Complex societies naturally arise given particular structural preconditions, but the long term dynamics exhibit stochasticity. Second, that stochasticity may be a due to endogenous parameters within the system. In other words, randomness in long term dynamcis may not be due to an outside "shock," like climate change or disease. Rather, it may simply be due to the fact that societies are complex systems which oscillate around equilibriums. Citation: