The Origins of Intravenous Fluids

Flushing a vein with a liter of saline is standard protocol in clinics and hospitals. To receive fluids intravenously is an ubiquitous therapeutic, a common tool to alleviate many conditions, so standard that there are even businesses that offer an IV and a bag of saline as a cure for the common hangover.

Intravenous fluid resuscitation relies on the principle of replenishing our precious bodily fluids through delivery directly into the blood vessels, but where did this concept come from? How did a remedy that breaches the skin and veins, violating the sanctity of the human body to inject a liter of foreign substance enter the medical armamentarium? It has its origins in mankind’s quest to defeat a bacteria infamous for causing such prolific diarrhea that it causes fatal shock: cholera 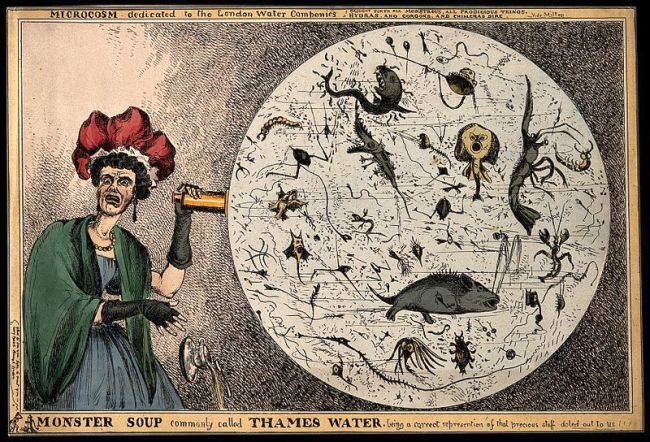 Cholera is “a disease that begins where other diseases end, with death.”(1) It has swept the world seven times in massive pandemics that have cost millions of lives. Infection with the bacterium Vibrio cholerae is no simple intestinal tussle with a diarrheal bug. The cholera toxin invokes a profound amount of fluid release from the gut, with some patients producing a liter of watery stool per hour and dying within hours of infection due to dehydration and hypovolemic shock.

In 1831, a devastating strain of cholera blossomed along the Ganges River delta in India and spread rapidly overland into China, Iran, and Russia before being transported along the Ural Mountain trade routes into Europe. In the British Isles, home to cargo ships returning from hotspots such as the Baltic and Southeast Asia, over 23,000 people perished of the new disease. European ships carried the disease across the Atlantic, where it burned across Canada and the United States, reaching the Pacific Coast as early as two years after the first documented outbreaks in India. (2) It was an epidemic the likes of which had not been seen since the bubonic plague, the bug inflicting quick death and killing massive swaths of the population

A young Irish physician fresh out of medical school in late 1831, William Brooke O’Shaughnessy was residing safely in Edinburgh, far from the epicenter of the cholera epidemic. The 22-year-old was intrigued by the nightmarish reports that reached him and was confident that “the habits of practical chemistry which I have occasionally pursued … might lead to the application of chemistry to its cure.” (3) Seeking adventure and to make a name for himself, he traveled to Sunderland in England to immerse himself in the epidemiological fray. 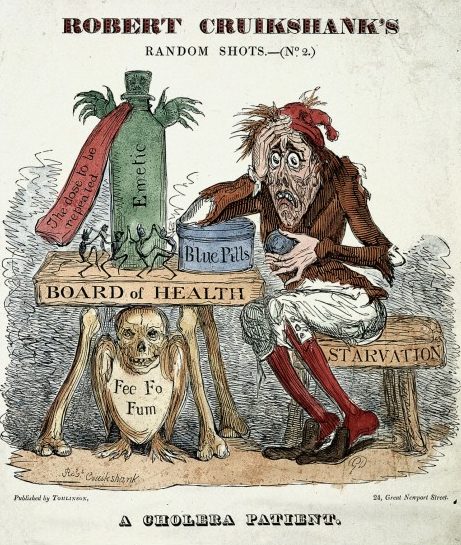 There he found an alarming scene and would later describe the epidemic as “sudden, deadly, over-whelming, the living death.” (4) Overcoming the clinical horrors and turning an analytical eye towards the crisis, he noted that the victims of cholera fared rather poorly with the treatments du jour such as bloodletting, the application of leeches, and the use of powerful cathartics and emetics such as mercury chloride and castor oil to Drano-purge the intestines. Today we can easily recognize that such treatments actually worsened the loss of fluid volume and even hastened death, contributing to cholera’s staggering mortality rate, which ranged from 10 to 70% of those infected and rivaled that of the bacteria Yersinia pestis during the Black Death. (5)

Using his knowledge of chemistry, O’Shaughnessy examined the blood and stool of his cholera patients, making crude measurements of the electrolytes in both. Key to his work was his observation that large amounts of water, sodium, chloride, and bicarbonate had been leeched from the blood and lost in the stool. Though his deductive mathematics would no doubt be considered primitive today, their simplicity finally and effectively illustrated an aspect of the cholera’s pathology. He published his findings in The Lancetand proposed a radically simple solution – replenish exactly what was lost from the gut directly into the veins.

The indications of cure … are two in number – viz. first to restore the blood to its natural specific gravity; second to restore its deficient saline matters … The first of these can only be effected by absorption, by imbibition,or by the injection of aqueous fluid into the veins. (6)

Dr. Thomas Latta, a fellow British physician, was inspired by O’Shaughnessy’s logic. Less than two months after The Lancet publication, Latta performed the first therapeutic intravenous resuscitation in May of 1832 with infusions of a homemade solution, a watery hypotonic mix of sodium, chloride, and bicarbonate. By injecting what he described as “copious volumes” of this solution with the use of a syringe and silver tube, he was able to revive eight of 25 patients that he infused. (7)(8) Latta would describe the first instance of intravenous fluid therapy:

Having inserted a tube into the basilic vein, cautiously, anxiously, I watched the effect; ounce after ounce was injected, but no visible change was produced. Still persevering, I thought she began to breath less laboriously; soon the sharpened features and sunken eye and fallen jaw, pale and cold, bearing the manifest impress of death’s signet, began to glow with returning animation; the pulse which had long ceased, returned to the wrist, at first small and quick, by degrees it became more and more distinct, fuller, slower and firmer, and in a short space of half an hour, when six pints had been injected, she expressed in a firm voice that she was free from all uneasiness, actually became jocular, and fancied all she needed was a little sleep; her extremities were warm, and every feature bore the aspect of comfort and health. (7)

Intravenous therapy was a radically progressive treatment ahead of its time. While some clinicians embraced it as a novel remedy – some even go so far as declaring intravenous saline as a “miraculous and supernatural agent” that would revive the living dead – it was overwhelmingly denounced by the medical profession who condemned the very thought of invading the sanctity of the human body.(6) Instead, with no small amount of irony, they would continue with the leeches and ingested mercury, flushing the intestinal tract and draining the blood of their sunken eyed patients. As a result, the ensuing six cholera pandemics of the nineteenth century did not utilize O’Shaughnessy’s principle of rehydration therapy. 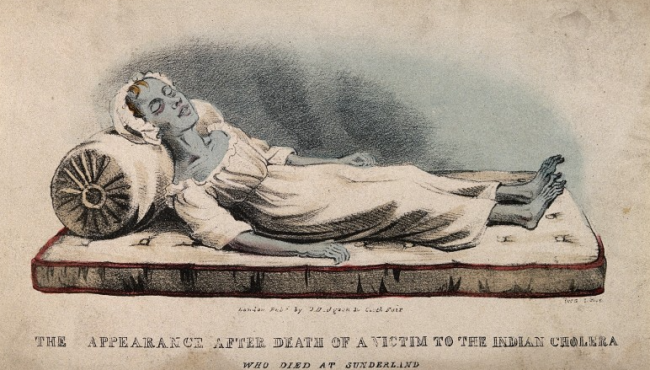 A colored lithograph by from 1832 of a deceased cholera victim. Note the blue complexion, sunken face, and emaciated extremities. Source: Wellcome Collection. Click for source.

A colored lithograph by from 1832 of a deceased cholera victim. Note the blue complexion, sunken face, and emaciated extremities. Source: Wellcome Collection. Click for source.

By our standards, it was almost the perfect remedy. Though his intravenous fluid therapy failed to gain widespread acceptance during his lifetime, he would, in time, be vindicated as the medical community grew to understand that cholera could be treated without resorting to antibiotics but through simple rehydration. Today we treat cholera patients using the same concept of rehydration to approximate fluid loss while also replenishing electrolytes, although bypassing the veins and simply drinking the solution. As one physician writing on the history of cholera treatments bemused, “the similarity between the intravenous fluids recommended by O’Shaughnessy in 1832 and those recommended by WHO for treatment of cholera today are obvious.”(5)

His groundbreaking work in the effective treatment of cholera aside, O’Shaughnessy is responsible for establishing the principles of IV therapy through his careful observation and analysis of his patients’ bodily fluids and his rational proposal of “physiologic correctness.”(9) William Brooke O’Shaughnessy, a toxicologist and chemist by training, elegantly approached a medical crisis with the poise and reason of a true scientist, thus ushering in a new chapter of medical history and leaving a profound mark on the field that would save countless lives to come.