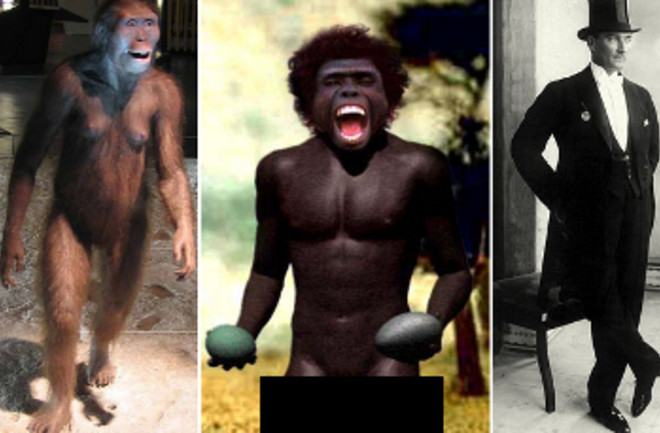 When I talk about sexual selection I usually make sure to have an accompanying visual of a peacock to go with the post. But really I could have used a dandy as an illustration, or perhaps in our day & age "The Situation". Unlike the peacock much of what passes for human "plumage" is not a result of native biological processes, but rather refashioning the materials of other organisms or synthetics into a sort of second skin (or skins with all our layers). In other words, clothes. These artificialities are so essential to our own identity as individuals that they often mark out our tribal affiliations, in pre-modern and post-modern contexts. Whole industries exist to cater to both our utilitarian needs and aesthetic sensibilities in regards to how we dress ourselves. The definition of a cyborg usually connotes a synthesis of biological with electronic. Perhaps that is because our artificial extensions in the form of clothes have seamlessly merged with our self-images, to the point where it would be ludicrous to perceive ourselves as merged entities. If you encountered many of your acquaintances or friends naked not only would embarrassment ensue, but I suspect one might initially not recognize them. A naked physique without distinctive aspects of clothing one associates with someone strips away individual identity.

But clothing has not been the eternal condition of man, recall that Eve met the fig leaf after an unfortunate sequence of events. In all likelihood our common ancestor with bonobos and chimpanzees were predominantly hirsute, as are most mammals. A mammal without fur is like a fish without scales and birds without feathers. Not impossible, but atypical. But at some point we did lose our fur. When? A 2004 paper offered up an intriguing possibility, that ~1.2 million years ago our lineage became hairless. How did they come to this inference? The authors noted that the consensus sequence of the MC1R locus in humans among dark skinned peoples coalesced back to this period (i.e., the last common ancestor of the MC1R genes which exhibit the ancestral type, which confers dark skin). Once our ancestors lost their fur then they would have been exposed to solar radiation, and so the necessity of dark skin. When did this naked dark ape cover his shame? (yes, I censored one of the images above to make this post "work safe" above the fold) A new paper in Molecular Biology & Evolution offers up a precise date using another proxy, Origin of clothing lice indicates early clothing use by anatomically modern humans in Africa:

Clothing use is an important modern behavior that contributed to the successful expansion of humans into higher latitudes and cold climates. Previous research suggests that clothing use originated anywhere between 40,000 and 3 million years ago, though there is little direct archaeological, fossil, or genetic evidence to support more specific estimates. Since clothing lice evolved from head louse ancestors once humans adopted clothing, dating the emergence of clothing lice may provide more specific estimates of the origin of clothing use. Here, we use a Bayesian coalescent modeling approach to estimate that clothing lice diverged from head louse ancestors at least by 83,000 and possibly as early as 170,000 years ago. Our analysis suggests that the use of clothing likely originated with anatomically modern humans in Africa and reinforces a broad trend of modern human developments in Africa during the Middle to Late Pleistocene.

The evolution-by-lice method has some pretty simple logic behind it. Our parasitic lice have followed us across our journeys. In this case there are two forms being spotlighted, one of the head, and another of the clothes. The genesis of the latter can give us a clue as to the period of time when our species began to be obligate clothed. One presumes that the head lice were the ancestral form, and that the clothing lice derived from them (the head lice took refuge there after we lost our fur). Standard phylogenetic methods which are applied across a range of taxa can then be turned to these two lice populations. When the clothing lice diverge from the ancestral line of head lice it stands to reason that humans must have been wearing clothing. A species which emerges to fill a niche, must have a niche to fill. Eventually the authors arrive at a figure of ~170,000 years before present. To get from here to there, they looked at four loci: three nuclear genes, 18S rRNA, nuclear elongation factor 1-α (EF-1α), and RNA polymerase II (RPII), and the mitochondrial gene cytochrome c oxidase subunit I (COI). In the age of SNP-chips with hundreds of thousands of markers this may seem paltry, but the questions are far coarser in this case. The authors weren't looking to generate PCA plots showing the relationship of various disparate head lice lineages or anything so fine-grained. Rather, they were focusing on the speciation of the two lineages from a common ancestor, an archaic head lice population. This is a picture which can be painted in broad strokes, concretely, four genetic strokes. They found that the ancestral lice went through some sort of bottleneck, likely mirroring their hosts. That was followed by a demographic expansion. Again, mirroring the hosts. Surprisingly the gene flow seems to have gone predominantly from the clothing lice to the head lice! Previous studies using a set of different markers, specifically microsatellites, did not find that the two populations evidenced gene flow after their separation. Additionally, as noted the direction of gene flow is somewhat surprising as the clothing lice population clearly derive from the head lice. This peculiarity makes me think of Sewall Wright's shifting balance model, whereby population structure and historical events are critical in shaping contingent arcs of evolution. Figure 1 illustrates their model in the context of prior data:

Using the genetic data, a Bayesian coalescent model with assumptions of migration, population structure and mutation rates, they generated a distribution of the probable time when head and clothing lice went their (generally) separate ways. The gray line follows the arc of the distribution, with ~83,000 years before present as the mode, and ~170,000 years before the present as the median. Such a probability density distribution seems to imply that clothing lice lineages which we have today emerged at least before the expansion of modern humans out of Africa. As anatomically modern humans emerged ~200,000 years ago in Africa there is a strong probability that clothing in Africa dates back to the archaic lineages. If the paper cited above in regards to MC1R coalescence is valid, these results indicate a period of "naked years" between the loss off fur by H. erectus (I believe H. ergaster in Africa), and the adoption of clothing by modern humans or some archaic group. The authors correctly note that they can not rule out that other human lineages, such as Neandertals, wore clothing and had their own lice lineages. Despite the evidence of Neandertal admixture, it seems that the lice results are in alignment with the mtDNA, and imply total replacement. Just as Gallo-Roman nobles began donning Frankish trousers perhaps the Neandertals assimilated into modern human bands tossed aside their barbaric capes and took up the clothes of civilized folk with vaulted arches. Despite their claims of more sophisticated methodology we probably should be a touch cautious about these results. Some of the findings are weird (the gene flow from clothing to head lice) and conflict with earlier work (finding gene flow in the first place). The parallels between lice & men in terms of evolutionary history are both striking and suggestive, but lice are lice, and they may have their own wily ways. And let's not forget the pubic lice, which tell a different set of stories. Citation:

Acknowledgements: Thanks to Dienekes to the paper pointer.