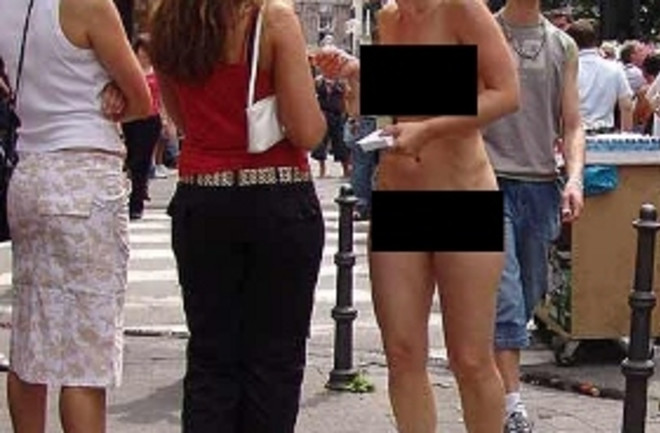 What I wonder is, how much will personal genomics be like nude beaches? I mean, it's been a long time since the first nude beaches, but most people don't take advantage of the opportunity. Clearly, there's variation in different countries! But most people neither feel compelled to see others' data nor feel comfortable sharing their own.Well, they used the word unzipped, not me!

Obviously John had his tongue-firmly-planted-in-cheek, but I have wondered about this. How deep is the impact of personal genomics going to be for individuals? If a person gets their genome sequenced and has a list of odds ratios in front of them are they going to bone up on the statistical genetic subtleties of the face value? That is where genetic counselors come in. The necessity of interpretative experts highlights the difference between nude beaches and personal genomics: personal genomics has more potential societal impact. I know of the nudist/naturist phenomenon only tangentially, but it strikes me as similar to the broader New Age health movement. The focus is on individual health returns. A colon cleanse simply does not have much of broader social effect. Yes, lest my nudist readers strike me down I do understand that there are purported positive social externalities, but set next to personal genomics nudism still strikes me as a fundamentally more individual activity whose benefits redound to the naked individuals, and not the broader clothed society. It does not pick my pocket nor break my leg if my neighbor is a weekend nudist. It is of no concern of mine (in contrast, my experience with public nudity is that it is generally disruptive when unexpected).

I conceive of the social returns to personal genomics as a function of the proportion utilizing it will be defined by an s-curve. When only a few people have been genotyped your understanding of population-wide variation is still spotty. But as you increase your coverage you get a better sense of the variance within the population...but soon enough you enter the phase of diminishing returns. Here’s a concrete example. In Reconstructing Indian History Reich et al. indicated that it is likely that South Asian castes are endogamous groups which will carry their own recessive risk alleles. In other words, Kayasthas from Bengal may have their own suite of recessive diseases, while Nadars from Tamil Nadu may have a totally different set of risk alleles. In a world with infinite NIH funding there would studies of Kayasthas and Nadars, and doctors and genetic counselors would be aware of what to look for in each group. We don't live in a world with infinite NIH funding. Let's assume that 1% of Indian Americans are Kayasthas from Bengal. That's 30,000 people. If 5% of them make extensive use of personal genomics, then you have 1,500 people with a deep individual knowledge of their personal genomic profile, as well as a set of possible diagnoses or suites of symptons. We're still at the individual level. How does this matter on a social scale? Because with modern technology people can form communities online and get a sense of the nature of things from the "bottom-up." Granted, the information gleaned isn't going to go through peer review, and "irrational herds" can no doubt emerge. The bigger point is that sum can become more than the parts as motivated individuals pool information in a coordinated fashion. Once there's some general insight extracted then that will flow to the rest of the group because of interpersonal networks. This already happens with genealogy. A few highly motivated individuals dig deep into the archives to learn about their own personal history, and once they've retrieved the information they freely distribute what they've found to their relatives. From one perspective you could say that others are "free riding" on the passion and labor of a few, but you could also characterize this as a spillover effect or positive externality. The consequences of personal genomics are arguably much more substantive than traditional genealogy because of their potential health import. Note that I'm emphasizing the social good here. Your sample size only needs to be so large to get a good sense of population-wide dynamics. More prosaically, as I noted before the Genomes Unzipped bloggers have opened a window into the genetics of their extended families. IfDienekes analysis is correct Joseph Pickrell and Vincent Plagnol likely have half-Jewish parents. Not that there's anything wrong with that, though some people are still somewhat reluctant to acknowledge their Jewish heritage even today. I assume that there will be individual utility as whole populations are sequenced over time. There's more you can potentially learn by getting yourself sequenced even after ethnic-group or family level risks are ascertained (e.g., what are your distinctive alleles which are de novo mutations?). But this would simply be a classic increase of well being through summing of the parts. And here the analogy to the nude beach would be valid. Image Credit: Pradeur