Toxoplasma gondii is a tiny organism that lives inside cells. It might well live inside your cells – the parasite is thought to infect up to 50% of the world’s population, along with cats and many other animal species. 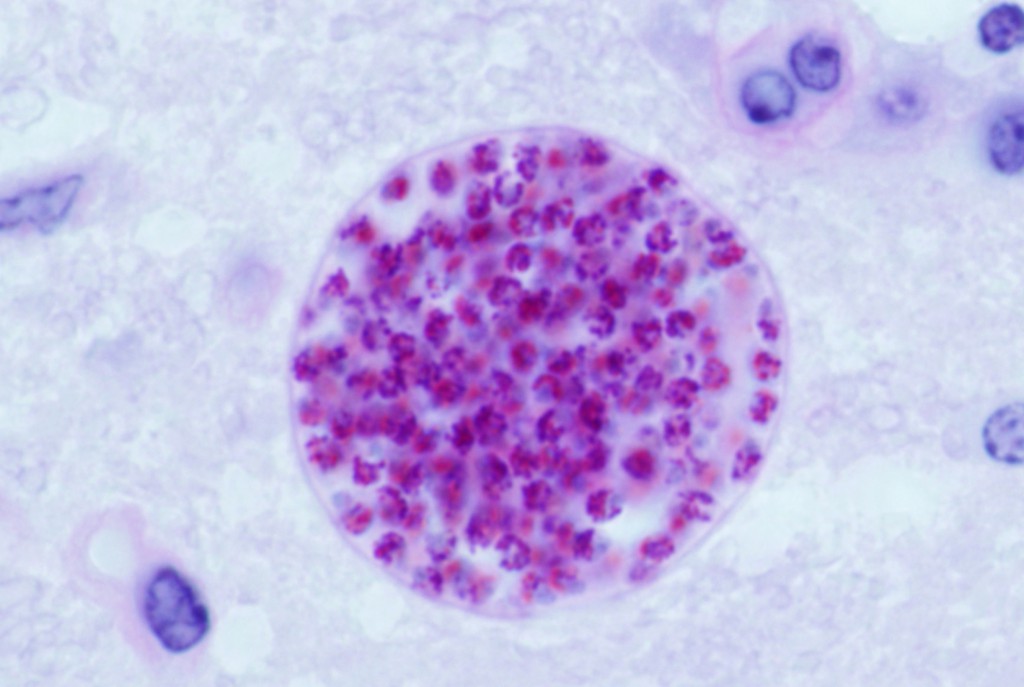 This is worrying, because many researchers believe that T. gondii infection, or toxoplasmosis, can alter human behavior. Among other organs, the parasite infects the brain, and it has been blamed for making people more impulsive, and more prone to mental illness, including schizophrenia. The idea of ‘behavioural’ toxoplasmosis has driven a huge amount of research and media interest. But in a new PLoS ONEpaper, Duke University researchers Karen Sugden et al. suggest that there may be nothing to worry about after all. They report that toxoplasmosis is associated with essentially no behavioural abnormalities in humans.

Sugden et al. examined the Dunedin Longitudinal Study, a sample of over 1,000 people born in New Zealand in 1972-73 and followed up from birth. Sugden et al. tested the participants blood samples, taken at age of 38, for antibodies against T. gondii. Of 837 people who gave blood samples, 28% tested positive, indicating that they were infected with the parasite. 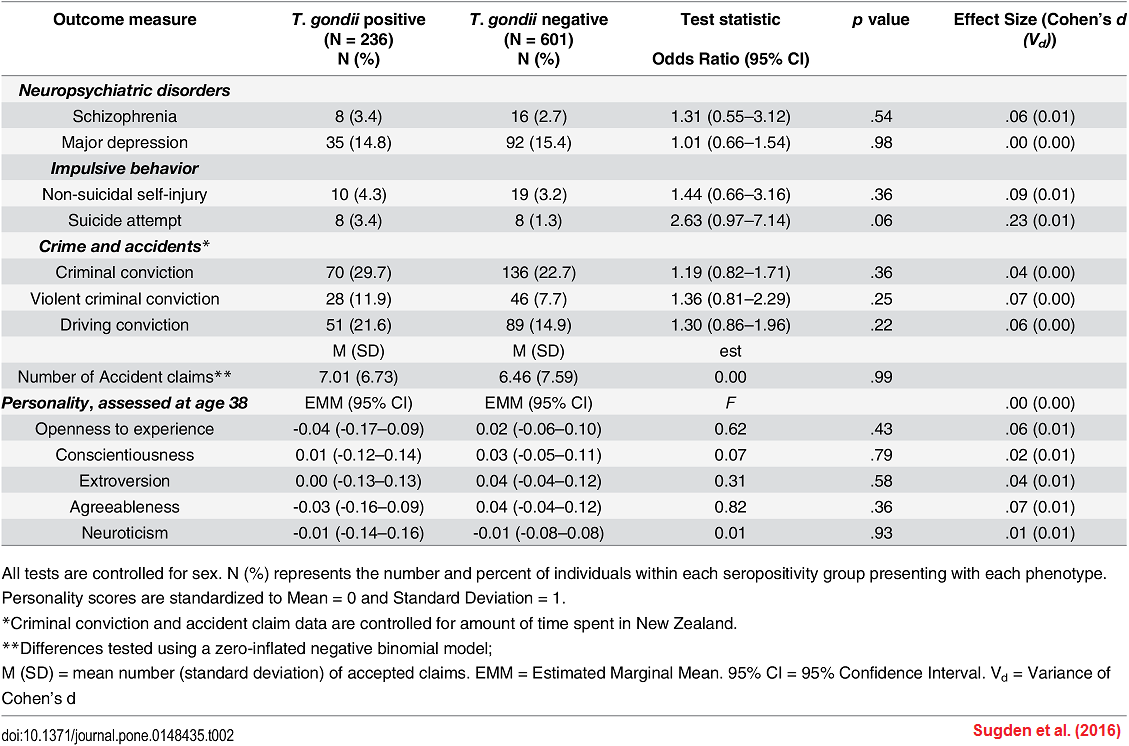 Toxoplasmosis was not associated with any personality traits, nor with rates of schizophrenia or depression. There was also no evidence that was linked to ‘poor impulse control’, e.g. criminal convictions, driving offenses, and accident claims on insurance. The one possible exception was that suicide attempts were more common in T. gondii positive people, but this difference was only of trend significance (p=0.06). T. gondii also wasn’t correlated with IQ or other measures of cognitive performance, except on one memory test (the RAVLT, p=0.04).

Our results suggest that a positive test for T. gondii antibodies does not result in increased susceptibility to neuropsychiatric disorders, poor impulse control or impaired neurocognitive ability…  this is, to our knowledge, the most comprehensive assessment of the possible link between T. gondii infection and a variety of impairments in a single cohort.

Yet many previous studies have reported an association. How do Sugden et al. account for the inconsistency between their results and those others?

This is, to our knowledge, the most comprehensive assessment of the possible link between T. gondii infection and a variety of impairments in a single cohort. Previous positive associations have been reported across different studies, often in selected or clinical samples; for example, one study will examine the link to violence, another the link to schizophrenia, and yet another the link to self-injury, and so forth.

Sugden et al. say that their result is unlikely to be a false negative

Although our cohort is of only modest size, it is adequately powered to detect small effect sizes (r = 0.1).

n=837 people is fairly large, but other T. gondii studies have been even bigger. For example, this study had n=7440, although the results were mostly negative also.

The authors conclude that the hype train around this media-friendly microbe may have gone too far:

T. gondii is a microorganism whose source of transmission [cats] is common and relatable, as evidenced by numerous recent popular opinion pieces (e.g., “How Your Cat Is Making You Crazy” [48]). It has been observed that the ‘hotter’ the topic and as more studies are reported and accumulate, replication becomes more difficult [49]. If we accept that the findings reported in the present article represent scenario two, then views of the link between T. gondiiand aberrant behavior may need to be tempered accordingly.

Cats are part of the T. gondii story because, in order to complete its life cycle, the parasite must be ingested by a feline (such as a cat). So the theory goes that T. gondiievolved to cause behavior changes in its hosts in order to make them get eaten. If T. gondii infects, say, a mouse, the parasite would only breed if the mouse got eaten by a cat. Reckless mice are more likely to get eaten than cautious ones, the theory goes.

Note that even if T. gondii doesn’t cause human behavioural changes, that doesn’t mean it’s harmless. Especially in people with impaired immune systems, and in pregnant women, it can cause serious illness.

Hmm, does all this mean that I should become a Toxoplamoskeptic? 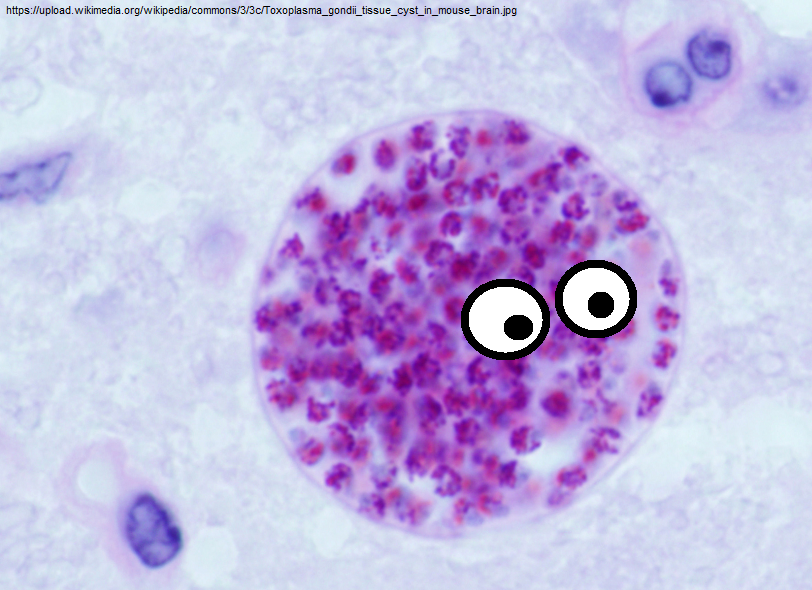 MindEsketamine, A New Antidepressant, Could Be A Game Changer

MindCan We Eliminate Depression? A Massive New Project Aims To Do Just That