The Mystery of a Heart Patient's Split Personality

A fainting spell uncovers a lurking heart symptom — with a bizarre behavioral twist. 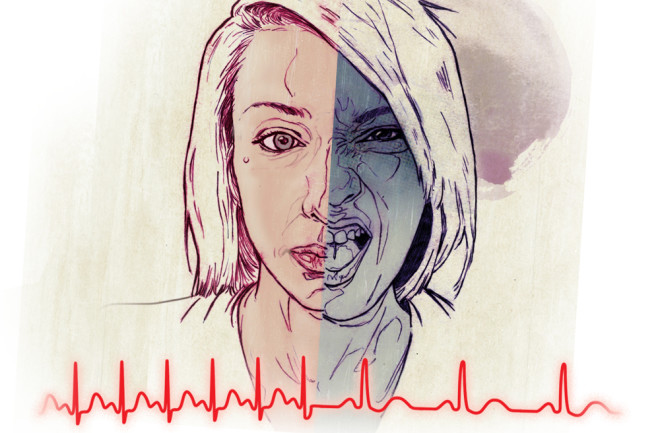 I was getting ready for rounds when the page came in.

“We have a stat consult in the ER,” I told my entourage when I hung up the phone. “A woman presented with syncope and significant bradycardia.”

“What’s that?” asked Ellie. I almost forgot my teenage daughter was shadowing me today.

“A fainting spell,” I explained, as Brian and Adam, the medical residents assigned to my service, and Ellie and I proceeded at a brisk pace to the emergency department. “The paramedics found her heart rate to be in the 30s.”

“What should it be?” asked the ever-inquisitive Ellie.

“The heart should beat around 60 times a minute at rest,” I answered. “Faster with activity.”

We arrived in the emergency department. “She’s stable now. She got atropine,” a nurse reported.

“It’s a drug we give intravenously to speed up the heartbeat,” I told Ellie, anticipating the question brewing in her head. “It works very fast.”

“Her heart rate is now in the 80s,” continued the nurse. “The medics said she went nuts at the scene. They needed three men to hold her down.”

I took the clipboard from the nurse and proceeded to the patient’s room, my eyes scanning the few documents that made up her chart.

The patient’s name was Mary, a 42-year-old, previously healthy woman. She was grocery shopping when she suddenly collapsed. She remembered nothing from then until the ambulance ride to the hospital.

“Why am I restrained to the bed, doctor?” she asked.

“The paramedics told us you were combative at the scene. The restraints are for your protection.”

“I don’t think so,” I said, and I began to undo her wrist restraints. I explained that her collapse was due to her heart rate dropping suddenly, resulting in insufficient blood flow to her brain, which then turned off momentarily, causing her to lose consciousness.

“Your heartbeat most likely paused,” I said. “By the time the paramedics got to you, your pulse was only in the 30s. By then you were awake but belligerent and cantankerous.”

I asked Brian to make arrangements for admission and for a pacemaker implantation later in the day. I asked Adam to explain the procedure to Mary and get informed consent.

“What caused her heart rate to get so slow?” Ellie asked me outside the room.

“Sick sinus syndrome,” I replied. “The sinus node is the part of our heart that generates an electrical stimulus that spreads throughout the area and causes the heart to beat. Something is somehow intermittently interfering with her sinus node’s ability to do its job, but I don’t yet know what.”

Satisfied with the answer for now, Ellie disappeared back into the room. As I went to call my patient’s primary care doctor, I mused: Why did she develop this? And why the combative behavior?

“Isn’t she too young for this?” asked Mary’s doctor when we finally connected. “She’s been pretty healthy all her life.”

“Sick sinus syndrome usually occurs in the over-60 crowd, but 40s isn’t totally unheard of,” I said. “But yes, unusual. What bothers me even more, though, is the combative behavior when she first came to. And that she recalls none of it.”

“She has no history of disruptive behavior,” her doctor said. “She’s always even-keeled.”

We were both puzzled. My entourage arrived as I ended the call.

I explained to her that the implanted device monitors for slowing of the heartbeat. It’s on standby if the heart rate is normal. If the heart rate slows, typically less than 60 beats a minute, the pacemaker detects the change and keeps the heart on track to avoid slowdown.

It’s a fairly straightforward surgery, and usually a patient is kept in the hospital only overnight.

“Tell her about the new leadless pacemaker,” said Brian, a tone of enthusiasm brewing.

“The way pacemaker systems are implanted now involves inserting leads, which are electrical connectors through which the pacemaker sends electrical impulses to stimulate the heart. The actual pacemaker is placed in a pocket created below the collarbone. The leads go into a vein under the collarbone, and pass into the heart. Most of the complications we get from the implantation surgery are related to these leads. A new system is being developed that involves placing the actual pacemaker device inside the heart, thereby being able to do without the leads,” I said.

“The pacemaker implantation surgery is scheduled for 3 o’clock this afternoon,” said Adam. “I’ll get the consent signed as soon as she arrives in the CCU.”

“Coronary care unit, or CCU,” said Adam. “Where we put our heart patients.”

We checked in on our ward patients for about an hour until the stat page from CCU sounded.

As I answered the call, the nurse’s voice was drowned out by the shouts in the background.

“My name’s not Mary, you dimwit,” I heard a woman yell. “I’m Courtney.” Her words had a hint of a British accent. It was the nice, peaceful, reasonable woman I had earlier unrestrained.

We rushed to the CCU. Two orderlies and two nurses held her down to the bed. But it wasn’t the commotion that caught my attention. The heart monitor at her side indicated her heart rate was only 37 beats per minute. Within seconds, more personnel arrived, and soon Mary, or Courtney, was again restrained to the bed, her body still moving wildly in all directions as she cursed like a drunken sailor, her behavior that of a possessed woman.

“Get the hell away from me!” she yelled. “Take these restraints off me, now!” She went on, her expletives raunchier and more profane by the second.

The nurse quickly filled me in on the latest events, and I ordered more atropine to be given stat. The drug was injected, and our eyes brightened as the bedside monitor indicated her heartbeat was climbing into the 90s. Almost like a switch was thrown, Mary settled down, took a deep breath and looked around.

“How did I get here?” she asked, her voice again mellow and calm. “I was just in the elevator on the way here from the ER. How did I get into this bed?”

“Mary, your heartbeat was normal when you entered the elevator downstairs,” I explained. “Your heart suddenly stopped for eight seconds, and you passed out. When your heart resumed beating, it was very slow — in the 30s. During that time, you were again very combative. You sounded like you had a British accent and said your name was Courtney. We gave you a medication that sped up your heart, and you normalized.”

“Why would I do or say those things, doctor?” she said. “And why can’t I remember?”

“I don’t know,” I said, pensively. Why indeed? Could it be that when the blood flow to the brain diminishes due to bradycardia, there are neurologic changes that cause this different personality? Or is there something going on in her brain that causes both her heart rate to drop and her behavior to change?

“So, if I get the pacemaker, my heart rate won’t drop and these things won’t keep happening to me?” Mary asked.

“That’s probably right,” I told her, thinking to myself that I’m going to want a neurology and psychiatry consult, too.

Ellie and I continued CCU rounds.

About 30 minutes later, Adam returned with the latest news: Courtney was back, and she wanted nothing to do with a pacemaker.

“I can’t get her consent. We haven’t been able to contact any family yet,” the resident said.

After consulting with physicians in neurology and psychiatry, we all agreed that a temporary pacemaker was necessary. After giving her more atropine, Mary came around again and gave her consent. The procedure went well. Mary’s heartbeat remained above 60 beats per minute. Her heart rhythm problem was solved, but we were still unsure why it happened in the first place and why her behavior was so unusual.

That answer wasn’t long in coming: The neurologist ordered a brain CT scan, which showed a brain tumor. This was removed the next day and was, thankfully, benign. Courtney never again bothered Mary.

Brain tumors can provoke significant slowing of the heart rate by pressing and stimulating the areas in the central nervous system that govern heart rate. This effect can be intermittent. Brain tumors can also cause changes in personality and behavior. It’s likely that the brain tumor had caused the severe slowing in Mary’s heartbeat, and led to the changes associated with a multiple personality-type syndrome. The temporary pacemaker was removed, and Mary has remained well ever since.

[This article originally appeared in print as "There's Something About Mary."]