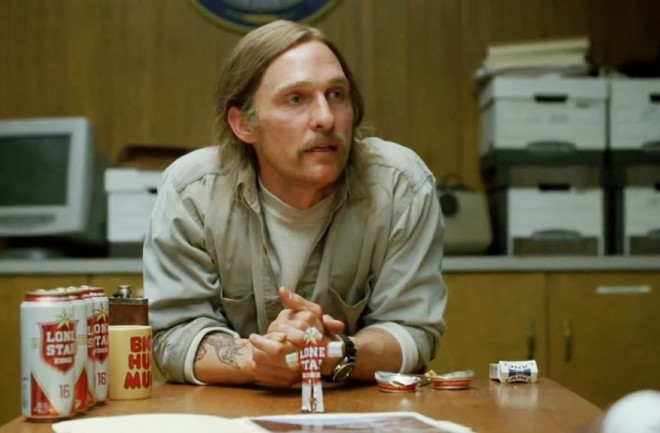 We are things that labor under the illusion of having a self. A secretion of sensory experience and feeling. Programmed with total assurance that we are each somebody, when, in fact, nobody is anybody.

Rust Cohle has tumbled down a deep, dark philosophical hole and wants us to follow him. In HBO’s episodic crime drama True Detective, Cohle—played masterfully by Matthew McConaughey—accentuates his homicide investigations with disturbing existential rumination. Listening to Cohle lecture on the futile nature of human life or the cosmic indifference of the universe is emotionally arresting to say the least. His “corrosive” soul is the fulcrum for the supernatural element in True Detective, a nihilistic car wreck to stare at each week.

But Cohle is more than just dark when he speaks about human nature, he is right.

When Cohle says that we are “programmed with total assurance that we are each somebody,” he’s not just trying to ruin partner Marty Hart’s “silent reflection periods,” he is bringing up some of the biggest questions in the scientific exploration of human consciousness. Is the mind separate from the body? Who is in control? What makes the mind? Some research suggests that fully understanding consciousness involves biting the bullet that Cohle loads in the gun: our sense of self is programmed, a construct, an illusion.

Ask most people if mind and body are one and they will say no. This is referred to as “naïve dualism.” The people who think the body and mind are separate—more specifically the physical brain and the mind—are not naïve or stupid themselves, so to speak, but rather we are born thinking this way without consideration. When we look in the mirror, for example, we instinctively comment on our physical appearance separate from the mind. “You” haven’t aged but your body looks older. When you trip on the sidewalk you might say your legs gave out, but it wasn’t your fault. We feel as though we drive our bodies like a vessel our minds inhabit. But these feelings are still considered naïve because of what we now know about the brain.

When we knew nothing of where the mind sprang from, it was understandable to think ourselves something of a puppet master. We are born (and cultured) with a sense of self located somewhere behind the eyes, in between the temples. Ultimately, our intuitive sense of self is like our pre-programmed intuitive sense of physics—useful in most situations, but not very accurate when we ask bigger questions.

With support from countless experiments and a number of intersecting fields, science is now certain mind and brain are one. More succinctly, “The mind is what the brain does.” If you—the you that harbors your personality, your will, your conscious thought—were truly separate from the physical brain, then brain damage or surgery could never change who you were. But it does. In theory, a surgeon could remove or alter a part of your brain and you would become an entirely different person (the case of Phineas Gage being the classic example). We’ve seen it enough times to know that our naïve dualism lives up to the designation. You are your brain. Dualism is no longer a scientifically tenable position. It may be a philosophical one, but Cohle has something to say about that too.

The dark truth Rust Cohle is alluding to is this: Who you are is entirely dependent on the physical brain, “this meat,” as Cohle puts it. And this meat makes mistakes about reality all the time.

Illusions are the easiest (and maybe the least depressing) way to see that our brains make mistakes. A famous optical illusion like this one makes it pretty clear that something is off. No matter how many times you try to see it, only by changing the conditions does something flip in your brain to say, “These blocks are the same color.”

Your brain is a prediction and modeling machine. There is simply too much information coming into our senses at any one time not to take advantage of some shortcuts. In the block example, your brain is assuming that the blocks are a different color because of their apparent lighting and 3D orientation. It makes a guess and that’s what you perceive.

Another example you’re going to hate me for: Your nose is always in your field of vision. The only reason why you don’t notice it all the time is that your brain is effectively editing it out like some green screen effect. Not only does the brain edit out reality, it fills it in. For example, you have two fairly substantial blind spots in your vision that you never notice. Only when you do a test like this do they “appear.” Otherwise, you would never see two large black spots in your vision. The brain is making predictions about the world and modeling what would be in those blind spots if the world were consistent within them. It’s a weird concept—the world we perceive is only our brain’s best simulation of what is beyond our eyes, ears, and noses. It gets even weirder than that.

In The Self Illusion, psychologist Bruce Hood lays out the case for how the brain’s models extend all the way to the self. Life seems rich and continuous and coherent to us, but thanks to the numerous illusions that fool us we know that’s not true. Because of how our vision works, for example, we are functionally blind between the times our eyes dart from one focal point to another, but we never notice. (Just try to see your eyes moving in a mirror.) Hood claims this blindness adds up to hours each day, but it’s never a part of our conscious experience. Those kinds of insights lead to a disturbing conclusion—the brain also models the self.

The “you” that rationalizes and chooses and deliberates is simply a way for the brain to navigate the world. Having a sense of a self that apparently controls the body from behind the eyes is an efficient way to deal with other sentient creatures, and evolved along with our intelligence, or so psychologists like Hood suggest. This conclusion doesn’t necessarily have to come from a scientific perspective either. In Buddhist philosophy, the term “anattā” refers to Rust’s contention of the “not-self” or the self illusion. If you simply pay attention to the nature of perception—what you feel and how—eventually you will notice that the sensation of a singular sense of self melts away. Of course, that kind of meditation does not work for everyone, and does not prove there is no “you.” Maybe shrinking your mirror down to the size of a quarter will help.

Think about the brain’s self modeling like The Matrix. In that film, humans are kept alive and thinking by electrical inputs wired straight into their brains. The humans in turn create a sense of self and experience from these inputs alone. But their sensory experience is completely illusory, and they’d never know it. Is that really any different from how we experience the world? Isn’t the self just a jumbled of sensory input that is stitched together like some rag doll that looks terrible up close? Now that’s thinking like Rust Cohle.

Rust Cohle by p1xer on deviantART

Rust Cohle by p1xer on deviantART

Matthew McConaughey’s character in True Detective could go down in TV history as the world’s biggest bummer—a pessimist walking into extinction. That doesn’t mean he’s wrong. Knowing that the mind is not separate from the brain, that our senses can be fooled, that our sense of self can break down if we simply pay attention to the here and now, Rust Cohle is right—we are a multitude of unconscious processes cobbled together in a locked room and labeled “You”.

People… I have seen the finale of thousands of lives man. Young, old, each one was so sure of their realness. That their sensory experience constituted a unique individual. Purpose, meaning. So certain that they were more than a biological puppet. Truth wills out, everybody sees once the strings are cut off all down.

If you haven’t seen True Detective, this will give you a good sense of the fantastic (and depressing) acting you are missing (video contains spoilers):

And check out the incredible fan art!

Human consciousness is nowhere close to figured out, and there is no way I could cover every argument about the self here. For more, check out these videos and books:

The Self Illusion: How Your Brain Creates You—A talk by psychologist Bruce Hood

Me, Myself, and Why: Searching for the Science of Self—By Jennifer Ouellette

The Self Illusion: How the Social Brain Creates Identity—By Bruce Hood