What Is An Organ?

The definition of an organ in our bodies is more slippery than you think. 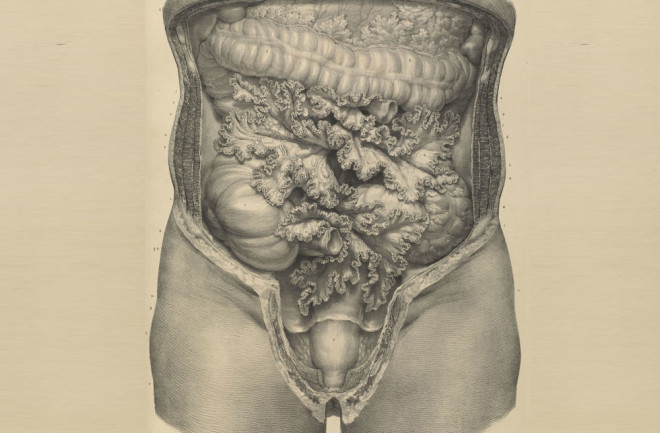 The kale-like structure you see here in this 1839 illustration is the mesentery. (Credit: Wellcome Trust)

In January 2017, a story begging to go viral fell onto writers’ laps: We have a new organ called the mesentery, which is a broad, fan-shaped fold that lines the guts. Here at Discoverwe pounced on the story, and so did CNN, the Washington Post, LiveScience, Smithsonian, Vice News Tonight, Jimmy Kimmel and many, many more.

We got it all wrong, and it’s time for us to spill our guts.

In our reporting, one burning question we wanted answered was who, or what, determines when a hunk of tissue “officially” becomes an organ. So we posed the question to J. Calvin Coffey, the Limerick University Hospital researcher who presented evidence in The Lancet Gastroenterology and Hepatology to “justify designation of the mesentery as an organ.”

“That’s a fascinating question. I actually don’t know who the final arbiter of that is,” he told us. Intrigued, I set out to find the official, legislative organ of organ designation and fell into a rabbit hole that grew deeper and deeper. For one, there is no legislative body that determines what an organ is, but there probably should be (more on that later). But in my search for this illusory organization, I soon discovered there's so much wrong with the mesentery narrative that developed this week. As a remedy, I’m going to break down all the problems with the following sentence:

This one is easy. We’ve known about the mesentery for thousands years, says Gray’s Anatomy editor Susan Standring. However, researchers have debated whether our body contained a single mesentery or mesenteries. Coffey and colleagues, in their new study, clarified the anatomic understanding of the mesentery, suggesting that it is indeed a continuous, singular entity that spans the gastrointestinal tract.

But Coffey didn’t discover the mesentery, nor was he the first to describe its contiguous structure. Leonardo Da Vinci depicted it as a single organ. In 1878, Carl Toldt echoed Da Vinci’s findings, which then were echoed by anatomist Edward Congdon in 1942 and again by Wylie J. Dobbs in 1986. But these findings were largely ignored in mainstream literature, and British surgeon Sir Frederick Treves’ description of a fragmented mesentery — from 1885 — enjoyed a long shelf life, but no longer.

Gray’s Anatomy has been updated in light of mounting evidence like Coffey’s, and the mesentery is whole once again. “Their findings have very significant clinical implications and necessitate a re-evaluation of mesenteric anatomy,” Standring wrote in an email to Discover. “It will be fascinating to follow their future research on the subject.”

Whoever came up with this notion that humans have 78 organs — 79 if you count the mesentery — anatomists are looking for you. “How anyone would come up with 78 organs as a definite number is mystifying,” says Thomas Gest, a medical education professor at Texas Tech University. He’s also an advisor for the Division of Gross Anatomy with the Federative International Programme for Anatomical Terminology

(FIPAT). FIPAT sets the international standard for anatomical terms, and is a program of the International Federation of Associations of Anatomists.

“It’s a silly number,” says Paul Neumann, also a FIPAT officer and professor of medicine at Dalhousie University in Canada. “If a bone is an organ, there’s 206 organs right there. No two anatomists will agree on a list of organs in the body” Neumann challenged me to find the definitive source of this magic number 78.

Although it’s cited copiously on the web, I couldn’t trace it to its ultimate source. Neumann and I had a laugh when he pointed out that the Wikipedia page, which states there are 79 organs — with the addition of the mesentery — goes on to list more than 79. “How we settled on 78 is a good question, and is probably lost in history,” says Shane Tubbs, vice president of the Seattle Science Foundation.

About That Word 'Organ'

So what hell is an organ? Tom Broman, a science historian at the University of Wisconsin-Madison, laughs when I ask him. “The question isn’t stupid, but the answer is kind of crazy,” he says. “In antiquity, you already have writers like Galen talking about the kidneys, liver and spleen as unified structures that do stuff.”

Before our interview, Broman had dusted off early 20^th-century internal medicine textbooks to see if he could find a clear-cut definition of an organ — he didn’t. “The author in one of these books is talking about the nipple as an organ, the esophagus as an organ, and he does it without explicitly defining what an organ is,” Broman says.

Based on his survey of the literature, he arrived at a pretty unsatisfying answer to my question. “It’s pretty clear that an organ is any solid thing in the body that does something,” Broman concluded.

I dug into the question myself, and the modern definition of an organ is a small improvement on Broman’s: An organ is composed of two tissues, is self-contained and performs a specific function. That still leaves a lot of wiggle room, and anatomists are taking it. Neumann said some scientists argue that an organ must provide a vital function not just a function, while others say organs can only be located inside the body.

“We don’t even have complete uniform acceptance that the skin is an organ,” says Neumann. “They say it doesn’t have a function, it’s just the body envelope.” As I exchanged emails with the experts, I got a taste of the discord in the anatomist community. Gest said that, by definition, each bone in the body would be an organ. In the same email chain, Ian Whitmore, a professor of surgery at Stanford, disagreed.

Gest summed up the state of organ nomenclature neatly. “Defining any part of the body as an organ is pretty much in the mind of the definer,” he wrote.

Yes, It Does Matter

The anatomical world is just beginning to standardize definitions, with the first attempts being made by the Clinical Anatomical Terminology Committee of the American Association of Anatomists, says Whitmore. The process has been slowed by the contentious nature of the field.

"Whenever an item was discussed it became quickly clear that the 20 or so senior anatomists from all over the world could not agree," Whitmore says.

Although FIPAT standardizes international terminology for human anatomy, it doesn’t determine what’s an organ and what isn’t — no one does, apparently. Neumann wants to change that. He says the rise of computer science necessitates a change of focus for FIPAT.

Neumann has worn many hats over the years, and got his start in academia as an artificial intelligence researcher at Columbia University in the 1970s. Today, we have early versions of AI-enhanced search engines — IBM’s Watson or Semantic Scholar — that comb through science papers and build connections based on the language in a study.

We’re also in the age of electronic health records. These computerized functions are dependent on data. AI-driven semantic searches need to be trained with large, annotated datasets that describe what a thing is and how it’s related to other things. In computer science this is called ontology, or the process of formally naming the types, properties and relationships between entities.

Neumann wants to move FIPAT to a more ontological approach and modernize its work to suit the age of computers. “With the rise of computer sciences, a bunch of biomedical ontologists have decided to set up their own terminologies, so we have a rift now between computer science and biomedical science,” says Neumann. “If you set up a database with an entity in it, you have to name it. You have to decide, for example, is the mesentery an organ? That’s something anatomists have avoided doing for a long time.”

If the definition of an organ is relative to every database, or Latin terms are translated differently, there are going to be search engines and health records with noticeably different hierarchical arrangements, and that might alter an AI's outputs.

So Neumann is hoping to close the gap, and he’s building momentum to standardize this process. “I want to turn our organization around so it’s not just names and implied definitions, but get absolute definitions and develop a modern ontological approach,” Neumann said.

He believes the time has come, and is working to build consensus for his approach, making stops around the world convincing other ontologists in the process. If Neumann's momentum continues and he ultimately succeeds, we might finally have a clear-cut answer to the question, “What is an organ?”

More From Discover
Health
What Is Delta 8 THC? Here’s Everything You Need to Know
Health
Can You Overdose on Marijuana?
Health
Are Fake Meat Products Good for You?
Recommendations From Our Store
My Science ShopCosmos: Possible Worlds
My Science ShopStrange Science
My Science ShopEinstein's Universe
My Science ShopElements Flashcards
Shop Now
Stay Curious
Join
Our List