The men of Africa 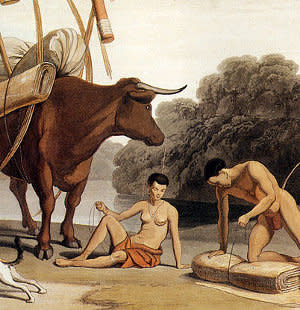 Khoikhoi on the move....

mentioned today a new paper, Signatures of the pre-agricultural peopling processes in sub-Saharan Africa as revealed by the phylogeography of early Y chromosome lineages

. Because of the recent comments in this space on the genetic history of Africa I was curious, but after reading it I have to say I can't make much sense of the alphabet soup of haplogroups. Remember, there are different ways to capture and analyze the variation in one's genes. A common activity is to sweep over the whole genome and focus on single nucleotide polymorphisms, variation at the base pair level. So my own analyses using ADMIXTURE focus on tens or hundreds of thousands of such markers. But there are other types of genomic variation, such as copy number

. Additionally, much of the older human phylogeographic literature focused on mtDNA and Y chromosomal variance. For mtDNA it was partly a function of how easy it was to extract the genetic material (it's copious on the cellular level). But perhaps more importantly these two types of variance aren't subject to recombination. This means they are defined by clean phylogenetic trees which do not exhibit reticulation (recombination chops apart correlated markers and mixes & matches them) and presumably are not subject to natural selection, and so perfect for coalescent theory

. So you can posit lineages related to each other by steps of sets of mutations, and also easily calculate the time until the last common ancestor for two different branches of the tree using a "molecular clock" model. Here's the abstract:

The study of Y chromosome variation has helped reconstruct demographic events associated with the spread of languages, agriculture and pastoralism in sub-Saharan Africa, but little attention has been given to the early history of the continent. In order to overcome this lack of knowledge, we carried out a phylogeographic analysis of haplogroups A and B in a broad dataset of sub-Saharan populations. These two lineages are particularly suitable for this objective because they are the two most deeply rooted branches of the Y chromosome genealogy. Their distribution is almost exclusively restricted to sub-Saharan Africa where their frequency peaks at 65% in groups of foragers. The combined high resolution SNP analysis with STR variation of their sub-clades reveals strong geographic and population structure for both haplogroups. This has allowed us to identify specific lineages related to regional pre-agricultural dynamics in different areas of sub-Saharan Africa. In addition, we observed signatures of relatively recent contact, both among Pygmies, and between them and Khoisan speaker groups from southern Africa, thus contributing to the understanding of the complex evolutionary relationships among African hunter-gatherers. Finally, by revising the phylogeography of the very early human Y chromosome lineages, we have obtained support for the role of southern Africa as a sink, rather than a source, of the first migrations of modern humans from eastern and central parts of the continent. These results open new perspectives on the early history of Homo sapiens in Africa, with particular attention to areas of the continent where human fossil remains and archaeological data are scant.

pastoralists, who possibly diffused from a central-southern African ur-heimat in advance of the Bantu expansion. This seems plausible to me. The main issue which I'm curious about in regards to all these results are the connections between Pygmies and Bushmen set against the Bantus. I certainly had no expected it, and it has been repeated several times. There is now a lot of weird evidence that demands a hypothesis.