The limits of the mean and the moderate

Red States vs. Blue States: Going Beyond the Mean:

In recent years, many scholars have explored the degree of polarization between red and blue states (red states are those carried by Republicans at the presidential level; blue states are those carried by Democrats). Some claim that red- and blue-state citizens are deeply polarized, while others disagree, arguing that there are only limited differences between the two groups. All previous work on this topic, however, simply uses difference-of-means tests to determine when these two groups are polarized. We show that this test alone cannot determine whether states are actually polarized. We remedy this shortcoming by introducing a new measure based on the degree of issue-position overlap between red- and blue-state citizens. Our findings demonstrate that there is only limited polarization—and a good deal of common ground—between red states and blue states. We discuss the implications of our work both for the study of polarization itself and for the broader study of American politics.

Generating a statistical construct of the distribution of liberalism and conservatism on social and economic issues the authors produced a set of plots which illustrate the differences between "red" (conservative) states and "blue" (liberal) states. In the figures below the blue line represents "blue states/regions" while the red dashed lines represents "red states/regions." 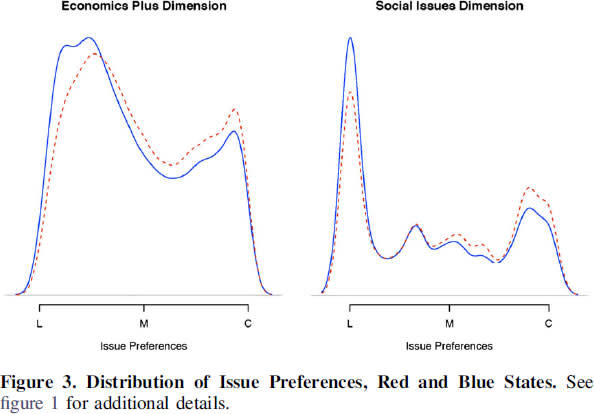 Let's drill down to the level of two extreme cases: New York state vs. Utah. 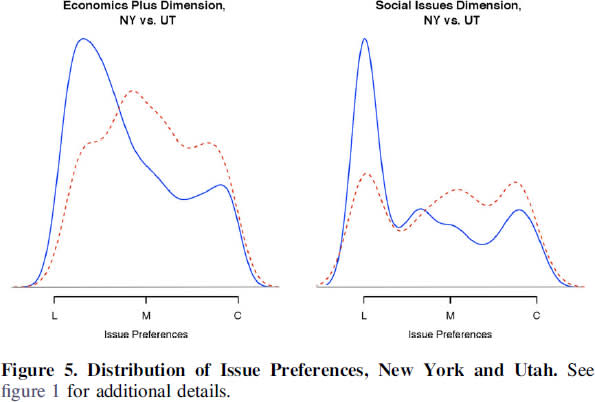 How about looking at a more finer-grain? The congressional district level: 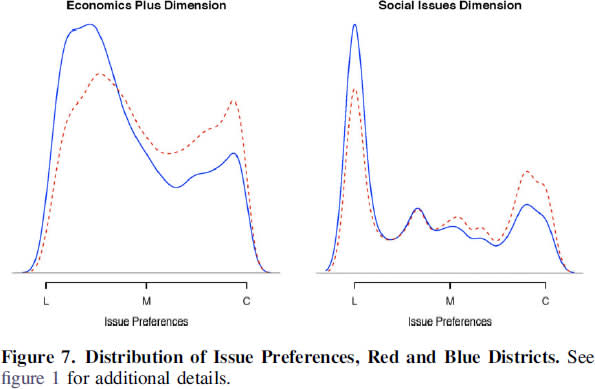 But this finding raises an important point: If red- and blue-state citizens are themselves so similar, why are their elected officials and laws so often quite different? A detailed answer to these issues would take us too far afield, but we suspect this points to the key role played by electoral institutions. The effects of factors like primary elections; single-member, simple-plurality districts; and the like mean that even small shifts in opinion can translate into large differences in outcomes (Fiorina and Levendusky 2006). But it is worth noting that each of these institutional features probably responds not only to the mean level of opinion, but also to the heterogeneity of constituency opinion. This suggests an important avenue for future scholarship to explore. To understand how a relatively moderate mass public generates polarized elected officials, we should focus our attention on how electoral institutions magnify relatively small differences in citizen preferences, not on finding an increasingly ideological public.

The institutional issue is straightforward: in the United States we have a first-past-the-post single-district voting system, the person with the most votes in a locality always wins. In most contexts even if you have less than 50% you win; there's no runoff. This means small differences in the mean which are consistent are going to result in a repeated outcome for one faction, barring massive systematic nationwide shifts which change the whole playing field. But I don't think it's just institutional. Certainly proportional representation voting systems don't necessarily result in a plethora of moderate parties. On the contrary, they often allow for the emergence of coalitions of very specific sets of interests. In theory first-past-the-post tends to favor moderation insofar as candidates have to appeal to the "median voter." I suspect part of what's going on is that it's not too useful to think of the whole electorate as relevant. Using the General Social Survey, below are the results for vocabulary test scores (out of 10) for people of a given ideology who have attained a bachelor's degree since 1972. I had to combine 0-4 because there really aren't that many people who score that low who have at least a bachelor's degree (this test has a 0.70 correlation with I.Q.). The rows add up to 100% after the first column, so yo ucan see that 35.3 percent of self-described "extreme liberals" with at least a college degree obtained a 10 out of 10, while 11.6 percent of "moderates" did so.

If you need a visual representation:

With at least a bachelor's degree 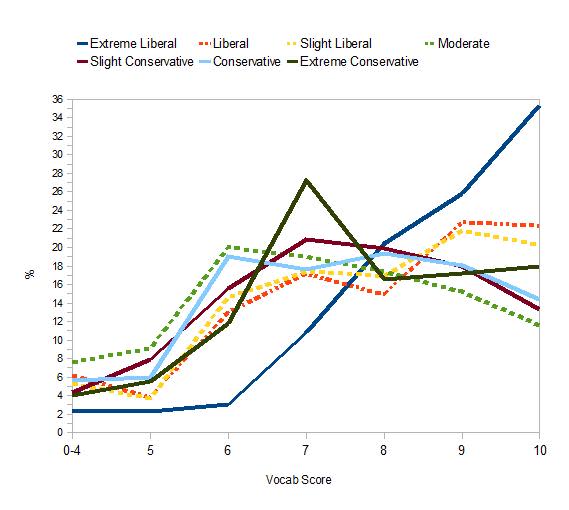 A fixation on how most people mostly agree misses the fact that the most eloquent, motivated, and ideologically reflective are least likely to agree. Additionally, much of history has been dominated by motivated and mobilized collective action of a subset of the population. Ideologues on the Left and Right may be outnumbered in raw numbers, but it is totally useless to view society as a matter of pure individual mass action of the totality. The sum of the social parts if you will. Rather, there is a structure within society, nested sets of institutions. These units of political and social coherency tend to bubble up on the edges of the distribution, not the center. The firm and hard-edged margins easily dominate the discussion over the soft center. So it was, and so it will be.