The law of reversion to type as cultural illusion

Does the higher genetic diversity in sub-Saharan Africans explain why mixed children of blacks + other couples usually look more black than anything? As in, the higher number of genetic characteristics overwhelms those of the other parent and allows them to be present in the child.

But this makes you ask: is the assumption that people with some African heritage tend to exhibit that heritage disproportionately even true? From an American perspective the answer is obviously yes. But from a non-American perspective not always. Why? Doe the laws of genetics operate differently for Americans and non-Americans? I doubt t. Rather, hypodescent, and its undergirding principle of the "reversion to the primitive type" are still background assumptions of American culture. In fact today black Americans are perhaps most aggressive and explicit in outlining the logic and implications of the "one drop rule," though non-blacks tend to accept it as an operative principle as well. Assessing someone's racial identity has a subjective aspect. We see through the mirror darkly, and that's a function of the cultural preconditions of gestalt cognition. But there are some objective metrics we can look at it. Foremost among them is skin color. The locus

is probably the largest effect gene which impacts normal human variation in skin color. It is responsible for 25-40% of the difference in pigmentation between Europeans and Africans. If you have the genotype AA you are lighter than if you are AG, and if you are AG you are lighter than GG. Almost all Africans are GG, and almost all Europeans are AA. What's the impact on African Americans then? Below are two panels which show the distribution of skin pigmentation using a quantitative metric as a function of the genotypes. 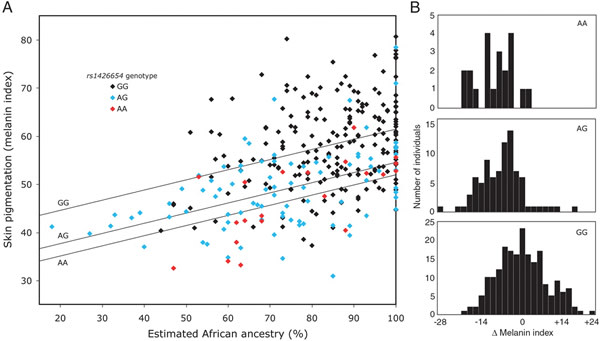 If you don't get the significance, let me highlight the text for this figure:

Effect of SLC24A5 genotype on pigmentation in admixed populations. (A) Variation of measured pigmentation with estimated ancestry and SLC24A5 genotype. Each point represents a single individual; SLC24A5 genotypes are indicated by color. Lines show regressions, constrained to have equal slopes, for each of the three genotypes. (B) Histograms showing the distribution of pigmentation after adjustment for ancestry for each genotype. Values shown are the difference between the measured melanin index and the calculated GG regression line (y = 0.2113x + 30.91). The corresponding uncorrected histograms are shown in fig. S7. Mean and SD (in parentheses) are given as follows: for GG, 0 (8.5), n = 202 individuals; for AG, –7.0 (7.4), n = 85; for AA, –9.6 (6.4), n = 21.

The difference between GG and AG is 7. AG to AA is 2.6. In short you see that the allele which results in lighter skin exhibits dominance to the allele which is correlated with darker skin! Strangely, this is not an isolated fluke. 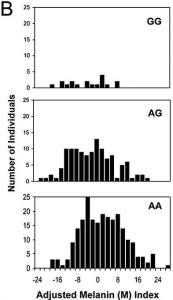 The results to the left are again the quantitative pigmentation values for an admixed population of mostly African descent, with some European ancestry. In this case it is for the KITLG locus, which can explain 20-25% of the difference in value between European and African populations in terms of pigmentation. The G allele here is the lightening variant. You see that GG are lighter than AG, who are lighter than AA. But what are the median values? -4.7 for GG, -2.9 for AG, and 1.9 for GG. The difference between AG and AA is 4.2. Between AG and GG is 1.8. Again you note that the lightning variant exhibits dominance on this phenotype in relation to the darker variant! The reason I'm rehashing these results (which I've presented before) is that in this case the cultural norm, at least in the U.S.A., is at variance at what is the reality on the phenotypic level. I was surpised when I first saw these results, and everyone else I've mentioned them to is moderately surprised. Why? Naively I assume that's because in the U.S.A. a white phenotype is "default," and deviations from that default prototype are particularly salient. Less noticeable to us is the possibility that those deviations may still result in a physical type closer to the default prototype than other types. More colloquially someone like Colin Powell is black because of the color of his skin,

But objectively his skin color is closer to white than it is to black (and judging from his features his ancestry is probably more European than it is African). Of course I'm not arguing here that all non-African features are dominant to African features. In terms of hair form it seems that this is not true. But again, this is partly an artifact of how we as humans classify the phenotype. People of mixed ancestry often have a different hair form from both their parents. It simply is the fact though that we "bin" moderately kinky and very kinky hair together into one class. The moral of the story is that when we talk about human population differences we need to be very careful of separating the subjective from the objective. Obviously this has been a fraught domain, and the best way to move it back into respectable mainstream discourse is to bleed it of its less scientific aspects.