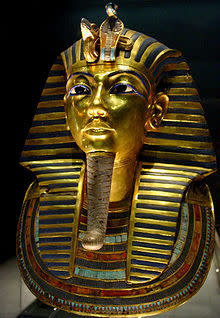 Last year some readers forwarded me a strange story about Hitler's "Jewish genes". I didn't think much of it, but enough people asked that I thought I should at least address the story (or lack of one). Today something similar is happening with the Y chromosomal lineage of the boy pharaoh Tutankhamun. A Swiss company is claiming that by examining the set of markers divulged on a BBC special on Tut's genetics they've established a high likelihood that he was of the R1b1a2 haplogroup. The firm making these claims has a history of sensationalism. That should tune our prior expectations a great deal. One of the researchers who did the original genetic analysis rejects the claims out of hand. On the basis of science then that's where it ends. But this actually is an interesting story of meta-science, of the media reaction to genetic results (or genetic inferences, tenuous though they may be), and their intersection with politics. One of the more ridiculous headlines I saw was this from CTV: King Tut may have been more European than Egyptian. I can see where they're coming from, the haplogroup which Tut may have been a member of is present at over ~50% frequency in Western Europe, and ~1% in Egyptians.

But this is just a single locus, a marker which traces the paternal lineage of an individual

(assuming they're male). To illustrate the obvious fallacy of this logic, recall that Dr. Daniel MacArthur is of the same haplogroup as I am, R1a1a. Does this imply that I am "more Scottish than Bengali"? Not really. In terms of total genome variation I'm South Asian, and Dr. MacArthur is Northwest European. Our paternal lineage is just one slice. Secondarily, why can't we formulate it so that Dr. MacArthur is "more Bengali than Scottish"? There are more Bengalis than Scots by about 1 order of magnitude. This is not a trivial issue in relation to whether being this particular type of R1b makes Tutankhamun more European, or Europeans more Egyptian. This area is unsettled, but as reported in some of the media some researchers are arguing that the origin of this haplogroup is in the eastern Mediterranean and later spread to the west. In other words, Egypt may be closer to the point of origin of this patrilineage, and so closer to the root. The argument is that the high fraction in Western Europe is a function of the replacement of hunter-gatherers with farmers, and serial bottlenecks resulted in genetic drift which increased the fraction of R1b1a2. Using the strange reasoning in some of the media this would make Western Europeans a West Asian population! Finally there's the racial-nationalist subtext. There are two groups which have really strong opinions about the racial identities of ancient Egyptians: Nordicists and Afrocentrists. It won't surprise you that the valence of their opinions are inverted. The Nordicists assume that ancient Egyptians were a white European population which was racially debased through admixture, and is blacker today than it was in the past. The Afrocentrists make the opposite claim, and often imply that modern Egyptians are primarily the descendants of Arabs, who assimilated the black Egyptians of yore. Both positions seem to be wrong-headed, and attempt to interject Egyptians into arguments which they have no interest. I suspect that the Sub-Saharan African admixture in modern Egyptians is higher than in the ancient population, because in non-Egyptian populations in the Middle East there's a clear difference between Muslims and non-Muslims, with the latter having far less Sub-Saharan African admixture than the former. With the rise of the Islamic world and the trans-Saharan camel trade slaves became a much larger export commodity from Africa than they had been in antiquity. That being said, there are clearly Nubians in ancient Egypt, and I wouldn't be surprised if the original Egyptian population had a minority Sub-Saharan African component which was evenly distributed and so not particularly discernible (the Egyptians considered themselves racially distinct from the Nubians to their south, the Libyans to their west, and the Levantines to their east). These particular questions about ancient ancient Egyptians could be answered relatively quickly. Simply survey a large number of Egyptians of Coptic and Muslim affiliation across various regions, and compare them to other populations. I would predict that the Muslims have more Sub-Saharan and West Asian affinities than the Copts, and there would be a larger imprint of Greek influence in the Delta. Additionally, Egypt is dry and mummification can preserve organic tissue. There will probably be some analyses of ancient Egyptian populations directly from extracted DNA. This is a case where reality is going to be more interesting, and perhaps more controversial, than sensationalism.