The genetics of adaptation, mutations of large effect?

Many months ago I was reviewing R.A. Fisher's The Genetical Theory of Natural Selection when I touched upon his view of the nature of adaptation, precisely, that it occurs though the substitution of mutations of small effect. This dovetails with the "gradualism" which Charles Darwin promoted, and is also the thinking that drive's Richard Dawkins conception of evolution promoted in his popular books. In contrast, in the contemporary age S.J. Gould was most closely associated with the position that mutations and evolutionary changes of a larger scale, macromutations, may play a role in adaptation (though more even heretically Gould also tended to dismiss the excessive focus on positively selected traits). Ultimately the macromutational (or more precisely non-gradualist) viewpoint has a long history, going back to Thomas Huxley, and exposited most forcefully by Richard Goldschmidt. Goldschmidt took the macromutationist to an extreme, verging on saltation via chromosomal rearrangements. 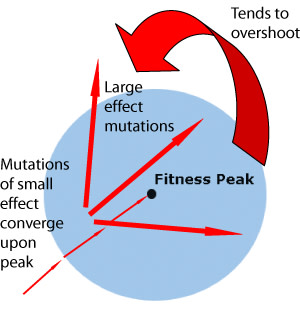 Fisher's response to this line of thinking made use of a geometric analogy. Though Fisher used a 3-dimension sphere, a two dimensional surface will suffice to communicate the logic. The point is that mutations of large effect tend to overshoot a fitness optimum across the arc of their consquences. In contrast, mutations of small effect can slowly approach the peak in a more cautious manner. A common illustration is the modulation of a microscope focus, a large shift is likely to cause reduced acuity, while small incremental movements are more efficient at refining the focus. Fisher also pointed out that large effect mutations are likely to have manifold consequences on a host of phenotypes, so the pleiotropy is likely to generate deleterious correlated responses on trait y, x and z even if it is beneficial for trait a. This model results in Fisher's conception of adaptation occurring via selection upon numerous allelic variations of small effect which slowly but gradually drive the phenotype up the fitness gradient and toward a stable peak. Once at this peak one assumes that the population would reach an equilibrium until a change in the environment induces a shift in the location of the peak and so a new phase of positive selection as extant background variation is called upon to generate the adaptive shift necessary. Though Goldschmidt's view was untenable, today it seems that Fisher was clearly too extreme in his conception of the nature of evolutionary change. Mutations of large effect do seem to be important in adaptive evolution. In 1992 H. Allen Orr and Jerry Coyne published a paper, The genetics of adaptation: a reassessment in The American Naturalist (140: 725-742) where they make the case that the Neo-Darwinian model that Fisher inspired and shaped was an overreach. There theoretical points are concise. First, they repeat Motoo Kimura's point that though Fisher showed that mutations of small effect are more likely to be favored (i.e., via the geometrical analogy), he did not show they were more likely to be substituted. By substitution I mean the replacement of the ancestral allele at a locus by a mutant allele so that the latter becomes fixed (~100% proportion) at the expense of the former. In other words, even if a cloud of mutations of small effect hover in the background, it may be that the odd mutations of large effect which doesn't cause unfavorable outcomes are the ones of consequence in the game of substitution. Kimura models the substitution rate, k(x) of new mutations of phenotypic effect x as proportional to:

...where m(x) is the rate of mutation to alleles of effect x,

is the probability that a mutation of phenotypic effect x is favorable (from Fisher's model) and 2x is proportional to the probability of fixation of such a mutation. As you can see the mutations probability of fixation is proportional to its phenotypic effect, that is, the more it does, the more likely selection is to push it to fixation. This is simply a reworking of 2s, the probability of fixation is 2 times the selection coefficient in a large population were drift can be neglected. As you can see, though the mutations of large phenotypic effect are less likely, they are more likely to fix when they do occur than favorable mutations of small effect. Orr & Coyne point out that though mutations of small effect might be far more numerous in relation to a specific trait than one or two mutations of large effect, the latter might actualy contribute more than the sum total of the small effect mutations to the character of the trait (i.e., as an explanation of the variation of the trait within the population). Secondly, there is the issue that Fisher did not consider adaptive landscapes with multiple peaks. His model was one where a great Fuji-like peak looms over the adaptive landscape, and all mutations must by necessity shift the value toward that peak if they are to increase fitness. But if there are multiple adaptive peaks, then an overshoot of peak 1 may actually result in a sharp approach to peak 2. On an adaptive landscape of multiple peaks mutations of large effect might be the coin needed to range over the full expanse. Orr & Coyne also point out that Fisher's conception of a mutation effecting multiple phenotypic dimensions was symmetric, in that change on all characters would be equally deleterious. This might be unfounded in that though changes occur on multiple traits, on some dimensions the consequences might be relatively minor while in others they are more significant in regards to fitness or function. Clearly this would dampen the problems that might emerge from correlated response to selection on one character. Finally, there is the point J.M. Smith brought up that the deleterious effects of a mutation could be dampened by the developmental system of an organism. In short, mutations happen, and deleterious ones at that, and organisms might have a natural buffering system for a particular basal level of mutational load. That's the theory, but what's the reality? I think the Post-Genomic Era has been highlighting plenty of large effect mutations. A clear example of this is skin color, it seems that interpopulational variation is generated by 4-5 loci of large effect (e.g., SLC24A5 explains 25-40% of the between group variance in relation to Africans and Europeans), with a host loci of small effect in the background. Additionally, the skin color genomics is clear testament to multiple adaptive peaks being explored by loci of large effect, East Asians and Europeans converge upon lightness through rather different genetic architectures. That is, alternative alleles of large effect resulting in the same phenotype.