The genetic palimpsest of the Middle East 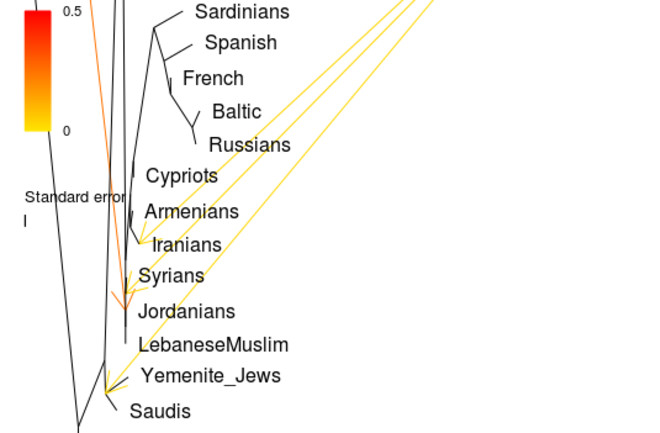 TreeMix on 100,000 SNPs, migration parameter = 5 When I read Genome-Wide Diversity in the Levant Reveals Recent Structuring by Culture in PLoS Genetics last week, one of my thoughts was "where is the tree"? Thankfully all the data is online, so I simply ran TreeMix on it. After a number of runs I know understand perhaps why there is no figure emphasizing a tree. There just isn't that much informative yield from what I can tell, though the basic inference from the paper is recapitulated. You can see the results in the figure above, from one of my TreeMix runs. Overall, what this paper reinforces is that there are sharp genetic distinctions across ethno-religious boundaries within the modern Middle East which confound attempts to use geography to predict variation.

Umayyad Caliphate There are two scales that one can bin the dynamics which might account for this. First, the Middle East has long been, and is still now, a region characterized by consanguineous marriages which likely increases genetic distance over short spatial scales. This may be of dep historical standing. Recall that in the Hebrew Bible there are many instances of cousin marriage, foremost being the marriage of Jacob* to Rachel and Leah, his maternal cousins (Jacob being the ancestor of the tribes of Israel). And yet a major feature of contemporary Middle Eastern society is parallel cousin marriage, the marriage of the offspring of brothers. This cultural pattern has been associated with Islam in particular, which has codified and expanded many practices which were present among the Semitic peoples of the Arabian peninsula. Second, there is the issue of the rise of Islam, and the crystallization of broad confessional communities which exhibit endogamy. By this, I mean that the process of Islamicization was accompanied by a level of marital segregation, the importance of which has been moderately debated. The primary fissure is the argument over the extent of intermarriage between newcomers from the Arabian peninsula and local populations, as opposed to conversion of local elites, and ethnic identity shift. Not only did the rise of Islam generate a novel range of endogamous communities, non-Muslim populations across what became the Arab world were sealed off from the demographic currents which arose due to the massive scale of the early Muslim empires. Recall that the hegemony of the Umayyads in the early 8th century extended from the Atlantic ocean to Central Asia! A major human consequence of the Pax Islamica was the influx into the core Muslim lands of slaves of various sorts. This precipitated the Zanj rebellion. But that catastrophic incident did not stop the trade in humans in the Islamic world, which persisted down to the 20th century. Importantly one must not forget that the slaves in the Muslim world were a multiracial cohort (though for various reasons black Africans and their descendants were particularly stigmatized as slaves, and remain so), Turks and Indians from the east, Caucasians from the north, and Europeans from the west, as well as Africans from the south. The key factor behind all of these is that the slaves were from non-Muslim lands, and originally not Muslim. And, due to social and economic considerations dhimmis, whether that be Christians of various sects, Jews, Sabians, Zoroastrians, and other assorted obscure ethno-religious minorities (e.g., Mandaens and Yazidis), were excluded from the mainstream of this cosmopolitan world of trade and migration. What the authors of the above paper confirmed is that Lebanese Christians, Muslims, and Druze, are genetically very distinct. Geography does not predict their clustering. Much of this is almost certainly straightforward admixture. The TreeMix plot shows the influence of African ancestry in the Muslim Middle Eastern groups. Using other data I have suggested that many of the non-Muslim populations of the Fertile Crescent reflect the extant variation at the time of the Arab conquest. Not only were these populations not subject to admixture with the victorious Arabs, but there were not impacted by gene flow from diverse populations which migrated or were brought into the center of the Muslim world.

One aspect of the PLoS Genetics paper is that they used ADMIXTURE to explore the relationship between two ancestral clusters, termed "Levantine" and "Middle Eastern," with a northern and southern geographic focus in the Near East.

These are familiar to those who read genome bloggers.

The Levantine component is probably the ubiquitous "West Asian" element (as implied by its closer association with European ancestral clusters), while the Middle Eastern is often labeled "South Arabian." In ADMIXTURE runs the Middle Eastern/South Arabian element is often the Eurasian component present in Ethiopians. A major issue to consider is whether the Middle Eastern/South Arabian element is itself a compound, as "Indian/South Asian" ones have been found to be. This would explain its genetic distance from other West Eurasian elements. It could be that it is simply a synthesis between indigenous populations and incoming farmers from the north. This hybrid population then underwent its own demographic expansion at some point later in history, even admixing with one of its "parents" to the north with the rise of Islam. Rather than more elegant and powerful methods what is needed here is more data. The ethno-religious minorities of the Middle East are fascinating treasure troves of cultural diversity, and genetic variety. In particular it would be of interest to explore differences between Iranian Zoroastrians and other Persians, as well as Copts vs. Muslim Egyptians. Because of genetic closeness it is not always easy to assess Arabian contribution to Middle Eastern populations, but at some point we'll have a better sense, and my prediction would be that it is minimal in Iran, but non-trivial in Egypt, explaining why the latter underwent language shift where the former did not. Citation: Haber M, Gauguier D, Youhanna S, Patterson N, Moorjani P, et al. (2013) Genome-Wide Diversity in the Levant Reveals Recent Structuring by Culture. PLoS Genet 9(2): e1003316. doi:10.1371/journal.pgen.1003316 * Jacob's parents were also related, with Isaac's wife being the daughter of a cousin.