The evolution of human intelligence

Social Competition May Be Reason For Bigger Brain:

"Our findings suggest brain size increases the most in areas with larger populations and this almost certainly increased the intensity of social competition," said David Geary, Curator's Professor and Thomas Jefferson Professor of Psychosocial Sciences in the MU College of Arts and Science. "When humans had to compete for necessities and social status, which allowed better access to these necessities, bigger brains provided an advantage." The researchers also found some credibility to the climate-change hypothesis, which assumes that global climate change and migrations away from the equator resulted in humans becoming better at coping with climate change. But the importance of coping with climate was much smaller than the importance of coping with other people.

At the link above it says that the paper is in press in Human Nature. Actually I think they must be looking at an old press release, because the description of the paper matches perfectly this paper published in January, Testing Climatic, Ecological, and Social Competition Models:

Hypotheses regarding the selective pressures driving the threefold increase in the size of the hominid brain since Homo habilis include climatic conditions, ecological demands, and social competition. We provide a multivariate analysis that enables the simultaneous assessment of variables representing each of these potential selective forces. Data were collated for latitude, prevalence of harmful parasites, mean annual temperature, and variation in annual temperature for the location of 175 hominid crania dating from 1.9 million to 10 thousand years ago. We also included a proxy for population density and two indexes of paleoclimatic variability for the time at which each cranium was discovered. Results revealed independent contributions of population density, variation in paleoclimate, and temperature variation to the prediction of change in hominid cranial capacity (CC). Although the effects of paleoclimatic variability and temperature variation provide support for climatic hypotheses, the proxy for population density predicted more unique variance in CC than all other variables. The pattern suggests multiple pressures drove hominid brain evolution and that the core selective force was social competition.

Table 1 has most of the important stats: 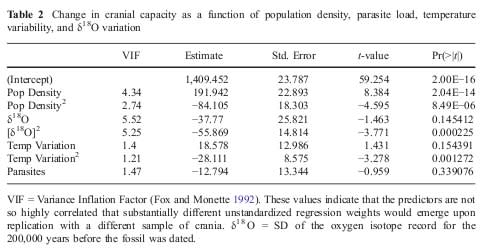 The text is clearer:

CC = "cranial capacity." Their sample consisted of ~150 skulls from a range of fossils, so it isn't as if they had the original brains on hand. δ^18O is an isotope that's used as a proxy for paleoclimate variation. Figure 2 shows the effect of the independent variables graphically: 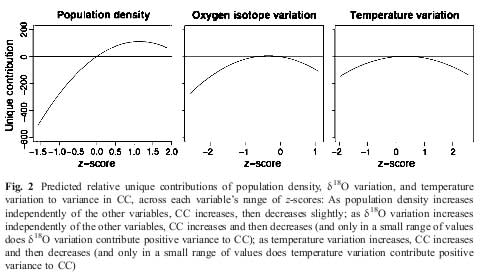