The End of Antibiotics?

Maryn McKenna has an unsettling and sobering article at Nature examining the the emergence of carbapenem-resistant Enterobacteriaceae. Since 2002, this large family of bacteria, gram-negative organisms that include many symbionts as well as the gut-dwelling Escherica coli and Klebsiella species that cause hospital infections, are increasingly in possession of a carbapenem-resistance gene rending our best antibiotics useless.

A map of the United States showing states with carbapenemase-producing CRE that promote resistance to carbapenem antibiotics as confirmed by CDC as of September 2012. Carbapenem antibiotics are a class of heavy duty antibiotics that treat a broad spectrum of bacterial infections. These antibiotics to be used as a "last resort," when nothing else works to dislodge a serious infection, and are now joining the rest of our failed antibiotics as microbes become increasingly drug resistant to our best and last options. These carbapenem-resistant Enterobacteriaceae, termed CRE, are alarming for three important reasons: they are resistant to nearly all antibiotics, they are frightfully deadly and kill nearly 50% of infected patients, and they can spread their resistance to other bacteria by swapping the plasmid containing the resistant gene. The Center for Disease Dynamics, Economics, and Policy has some nice interactive tools showing the emergence of these CRE over time. A snapshot of the emergence of carbapenem-resistant Klebsiella pneumoniae in the United States is shown below. 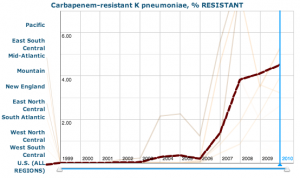 A graph from the Center for Disease Dynamics, Economics & Policy. Isolates of cabapenem-resistant Klebsiella pneumoniae have emerged since the early 2000s and are becoming increasingly common throughout the country with resistance rates rising from 0% until 2002 to 4.5% in 2010. K. pneumoniae, a member of the Enterobacteriaceae family, causes the vast majority of hospital-borne urinary tract infections (UTIs) and bloodstream infections. Click for source and to see an interactive version of this image. In her article "Antibiotic resistance: The last resort," McKenna sketches out the the origins of this new pandemic, where we went wrong in surveilling its presence in our hospitals and long-term care facilities, and ways to tackle its spread. The article is a must-read, kick-in-the-pants take on what we must do before we are completely at a loss to treat bacterial infections. With continuing spread of this gene among a population of pathogens and without this vital class of antibiotics, there may soon be a point in which we can do little to treat sepsis, urinary tract infections, or catheter-borne infections. We do not have any alternatives, we do not have adequate tools that work as effectively to treat these very serious, often deadly infections. In 2011, the CDC released a fact sheet for the public, "Antibiotics: Will they work when you really need them?" to help promote responsible antibiotic usage. In a decade, will we even be able to ask this question? Resources The World Economic Forum releases an annual survey, the Global Risk report, on the top 50 risks facing our world. Their 2013 report included antibiotic-resistant bacteria as one of those risks, citing destabilization to our health systems and food supply, imperiling the practice of common medical procedures, and the fact that none of the antibiotics and drugs that are currently in the development pipeline would be able to protect us against certain bacteria. Must read.