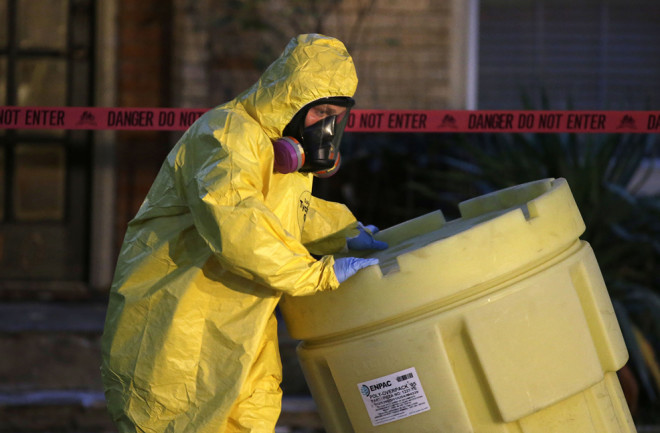 It takes very little Ebola virus (left), to cause disease, so this Texas worker wore full protective gear while cleaning up outside the home of an infected health care worker. | LM Otero/Associated Press/Corbis

It started quietly, deep in the forest of southern Guinea.

In Meliandou, a village in the prefecture of Guéckédou, a 2-year-old boy contracted the virus, possibly from a fruit bat. The child’s flu-like symptoms at first would have caused little alarm. But before long he began vomiting, and his stool was black with blood.

The young boy died on Dec. 6, 2013. By New Year’s Day, his mother, sister and grandmother were dead. A month later, so were two mourners who had attended the grandmother’s funeral, a local nurse and the village midwife. Before they died, the two mourners and the midwife carried the virus to nearby villages and to the region’s hospital, infecting others.

Thus began the worst Ebola outbreak the world has ever seen.

By last summer, people across Guinea, Sierra Leone and Liberia had retreated to their homes, unwilling or unable to get to clinics where they’d seen their friends and relatives go, never to return. Health care workers labored in sweltering facilities. More than 200 succumbed to the virus, and frightened staff fled their positions, forcing clinics to turn patients away.

Since the Ebola virus first emerged in 1976 in the Democratic Republic of Congo (then Zaire), flare-ups had occurred mostly in isolated Central African forest villages. News of Ebola’s lethality and its horrific symptoms — vomiting, diarrhea, and sometimes bleeding from the eyes, nose and other orifices — bred morbid curiosity and fear, and the gripping story of its emergence inspired the best-selling book The Hot Zone.

Despite Ebola’s ferocity, previous outbreaks infected a few hundred people at most. Ebola is highly infectious — just a few particles of the virus in a drop of sweat or blood can cause disease — and health workers must don personal protective suits and quarantine patients in isolation units.

But the virus is not especially contagious. It’s transmitted only via close contact with a patient’s bodily fluids, excretions, soiled clothing or bedding. And patients are contagious only when they are palpably and visibly ill, making carriers easy to spot. All this helped health workers corral past outbreaks, and before long the virus would retreat into the forest.

Not this time. Why, in 2014, did Ebola spread sickness and death through West Africa and beyond — and how can science help stop it?

Robert Garry knew early on that trouble was brewing. He was working at Kenema Government Hospital in Sierra Leone last March when he heard reports of Ebola in neighboring Guinea. He was there studying Lassa fever, a cousin of Ebola. At the time, 112 people had been infected and 70 had died from Ebola, but the World Health Organization (WHO) said Guinea’s outbreak was “relatively small still,” and Guinean officials said it was under control.

Garry, a virologist from Tulane University in New Orleans, knew a thing or two about how outbreaks of Lassa, Ebola and related viruses play out. “Lassa simmers,” he says. “Ebola explodes.”

And as the international community dozed, an outbreak detonated. Through the spring and summer of 2014, Ebola swept through Guinea and into its neighbors, Sierra Leone and Liberia.

The 2014 Ebola epidemic, the first in West Africa, was driven by a confluence of factors: poverty and lack of health care infrastructure; traditional burial practices that helped spread the disease; deep-seated mistrust of Westerners, health care workers and authorities; and the region’s growing mobility.

In May, women from Sierra Leone attended the funeral of a traditional healer who had treated Ebola patients across the border in Guinea. One of the mourners, a young pregnant woman, showed up at Kenema Government Hospital, where she miscarried and was diagnosed with Ebola. In all, 14 of the mourners were infected and spread the virus to their contacts in Sierra Leone, stoking that country’s epidemic, according to a DNA-sequencing study that Garry, renowned Sierra Leonean virologist and doctor Sheik Humarr Khan, Harvard virologist Stephen Gire and 55 colleagues later published in Science.

Garry and some colleagues, including Khan, readied the Kenema Government Hospital for Ebola patients. Soon he returned to the U.S., where he contacted federal officials to express his fears about a brewing epidemic. He received only “polite responses,” he says.

“The disease was spiraling out of control, and it was clear we were not equipped to fight it effectively on our own,” Brantly testified later to the U.S. Senate. He said he and his colleagues “began to call for more international assistance, but our pleas seemed to fall on deaf ears.”

On Aug. 8, WHO finally declared the epidemic a public health emergency of international concern. “No one was really imagining we would get to this situation,” WHO spokesman Tarik Jasarevic says. Within weeks, Liberia had surpassed Sierra Leone as the outbreak’s epicenter. By then, more than 2,400 had been infected and 1,346 had died.

Ebola’s spread caught many scientists off guard at first. They knew that shortly after infection, the Ebola virus commandeers or kills immune cells, weakening the body’s defenses and letting the virus run wild. They also knew that the virus interferes with blood clotting, which leads to bleeding and, in many cases, multiple organ failure.

But no proven therapy or vaccine existed at first, in part because of long-standing funding shortfalls for diseases that mostly affect the developing world. By summer, however, researchers worldwide were racing to the lab to combat the epidemic.

It takes very little Ebola virus (left), to cause disease, so this Texas worker wore full protective gear while cleaning up outside the home of an infected health care worker. | LM Otero/Associated Press/Corbis

At least four experimental Ebola drugs were in early stages of development. The first human safety trial on an Ebola drug began in January 2014 for TKM-Ebola, which contains snippets of RNA produced by Tekmira Pharmaceuticals that target three genes essential to viral replication. But it was ZMapp that grabbed the headlines. This cocktail of three antibodies, from San Diego-based Mapp Biopharmaceutical, binds to Ebola, neutralizes it and alerts the immune system to the infection. As of last summer, it had not been tested in people.

In July, Khan contracted Ebola. Physicians with the nonprofit group Doctors Without Borders, which led early efforts to combat the epidemic, agonized about whether to treat him with ZMapp. They feared that he might die, spurring even more mistrust of health care workers, and they decided not to. In late July, Khan died in a Doctors Without Borders clinic in Kailahun, Sierra Leone. He was 39.

Just days earlier in Monrovia, Brantly and a fellow American missionary, aid worker Nancy Writebol, were also diagnosed. They received a few of the ZMapp doses available and were then flown to Emory University Hospital in Atlanta. After several harrowing weeks in intensive care, they recovered.

By September, the first reports had appeared showing that ZMapp effectively fights Ebola in monkeys, and the U.S. government pledged $25 million to help Mapp Biopharmaceutical manufacture more of the drug, test it in clinical trials and get it approved for human use.

To protect people from infection, researchers also developed two different vaccines, each with a key Ebola protein sewn into a harmless virus. One of the vaccines, developed by scientists at the pharmaceutical giant GlaxoSmithKline and the National Institute of Allergy and Infectious Disease (NIAID), helped protect monkeys from Ebola infection 10 months after vaccination. NIAID then launched a clinical trial to test the vaccine’s safety, and GlaxoSmithKline committed to making 10,000 doses for health care workers by the end of 2014.

Too Little, Too Late

In September, the international community finally woke up to Ebola’s threat. President Barack Obama promised to send 3,000 troops to Liberia and build 17 treatment centers with 100 beds each. But by then, about 7,200 people had been infected, more than 3,300 had died, and the casualties were skyrocketing. Researchers at the Centers for Disease Control and Prevention built computer models, which predicted that, if a massive intervention failed to materialize, by January 2015 up to 1.4 million people could be infected.

The epidemic finally hit home for many Americans on Sept. 30, when Thomas Eric Duncan, a Liberian visiting Dallas, became the first person diagnosed on U.S. soil. He was isolated and treated intensively, but he succumbed just eight days later. Then two nurses who treated Duncan at a Dallas hospital were diagnosed, becoming the first-ever cases of Ebola transmission on American soil, and a different epidemic — this one of anxiety — swept the nation. “As long as the outbreak continues in Africa, we need to be on our guard,” CDC director Tom Frieden told reporters.

It will be difficult to eliminate the virus entirely, since Ebola lurks in animals and periodically jumps to humans, Harvard’s Gire says. But we can corral it by better diagnosing and treating infections, and by setting up labs on the ground to track emerging Ebola strains by sequencing their genomes. “Constant surveillance is the only way to be sure we know where the virus is going,” he says. “It’s imperative.”