The Dangers of Silicone Butt-Injections (in Sketchy Hotel Rooms) 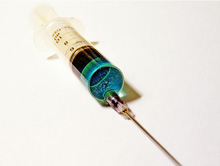 People of the world, please think twice before you ever walk into a hotel room to receive a silicone injection in your butt. A woman died earlier this week after visiting once such medically-rigged room, prompting a full blown police investigation. The 20-year-old British tourist was visiting Philadelphia with three companions; after she receiving the injections of liquid silicone she experienced chest pains and trouble breathing. She died on Tuesday, and police have already reported that they've found the woman who conducted the deadly procedure. But much is still unknown about this death. As Newser reports:

"We're not quite sure right now if that person performing that procedure is licensed or unlicensed," said Lt. John Walker of the Philadelphia police southwest detectives division. "We're still working that information right now."

Not only that, but technically, the police have not officially linked the injection with the death, even though the news of "death by butt-injection" is sweeping media outlets. Toxicologists' reports won't be back for another 6 to 8 weeks. Regardless, the scenario of undergoing cosmetic surgery in a hotel room sounds downright sketchy. And the hazards of improper cosmetic injections are well known. As NPR reports:

Dermatologist David Orentreich practices in New York City. He says that when silicone is used in extremely tiny quantities, called microdroplets, the substance isn't dangerous ... Orentreich says that practitioners must be skilled at injecting the silicone, and it must be pure. He says problems can occur when the silicone is not pure or when it is injected improperly.

If not done right, silicone injections can lead to death, and have done so in the past. From NPR:

In the worst case, a piece of silicone can break off and enter the bloodstream or the lung, causing a deadly embolism. There have been a number of silicone-related deaths, including a 43-year-old woman who died ... due to a silicone embolism in her lungs. A study from the University of Texas Health Science Center in San Antonio, reported at the 2006 annual meeting of the Radiological Society of North America, found that dozens of patients who received liquid silicone injections died from pulmonary silicone embolism.

Given the health risks of buttock injections, why would anyone want to do this? What these silicone injections specifically do to the recipient's butt is make it bigger, and one reason to do this is to capture that elusive thing called 'beauty.' This trend in cosmetically-enhanced butts is especially prevalent in Hispanic communities, according to one plastic surgeon. As Stylist reports:

"This is because a fuller, more voluptuous "J-Lo" butt is revered in their culture. In the American culture, a more toned, slender buttock is considered the ideal," says New York plastic surgeon Dr. Jennifer Walden.

Buttock injections are also popular with transgendered individuals who are transitioning from male to femle; unlike hormone treatments, which can take years to alter the recipient's body, a simple injection gives the patient immediate results. Quoting Marvin Belzer at the Los Angeles Children's Hospital, NPR reports:

They are young and impatient, he says, and silicone offers immediate results, especially for those who want to live as women, plumping out buttocks, thighs and breasts to give a more curvaceous female appearance.

The main reason to put yourself through these procedures, it appears, is to live up to cultural constructs, whether that be society's idea of beauty, or society's idea of what women should look like--nothing, it turns out, that's worth a bootlegged silicone procedure in a dodgy hotel room, and certainly not anything worth dying for. Related Content: 80beats: Danger, Stem Cell Tourists: Patient in Thailand Dies From Treatment Discoblog: NCBI ROFL: Hmmm…what should we call this new butt rash? Discoblog: Shocker: Artist’s Implanted Head-Cam Causes Medical Problems Discoblog: DIY Medicine: Motivated Engineer Designs His Own Heart Implant