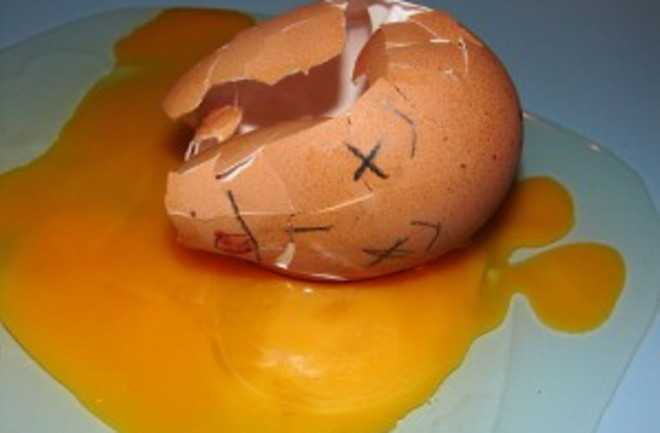 Photo: flickr/Louise DockerIf you've ever really thought about the lyrics to the most popular nursery rhymes, it's likely that you've been left wondering "WTF?" Many of the songs most often taught to the youngest of children contain creepy, inexplicable, and otherwise disturbing imagery. This (tongue-in-cheek) analysis of numerous nursery rhymes shows that the stories we are telling our children are less than nice: "We found 6 rhymes in which head injury was mentioned or suggested: 'Humpty Dumpty,' 'Jack and Jill,' 'Hush-a-bye-baby,' 'Ten Little Monkeys,' 'It's Raining, It's Pouring' and 'Ring Around the Rosie.' No single category appears to have been spared injury. Babies, teenagers, old men, primates, nongendered, nondescript characters — everyone suffered." Egad.Head injuries in nursery rhymes: evidence of a dangerous subtext in children's literature "Although nursery rhymes are considered an integral part of childhood, the medical events experienced by their characters have never been documented. Several popular nursery rhymes portray head injuries as inevitable events that do not require medical follow-up. In this paper, we document the prevalence of head injuries in nursery rhymes and discuss the appropriateness of the responses to them." Bonus quote from the full text: "In the case of Humpty Dumpty, we question whether “all the king's horses and all the king's men” were capable of launching an appropriate medical intervention after Mr. Dumpty's unfortunate accident. What sort of EMS training and equipment did these first responders have? Although the accompanying saddlebags might have contained a cervical collar, it is unlikely that a spinal board would have been available, seriously compromising spinal management. The presence of “all the king's men” also suggests a shocking lack of crowd control. Could the crowded scene explain the inability of the responders to “put Humpty together again”? Should this attempt even have been made, given the circumstances? Might a “snatch and run” by real EMS personnel have saved the victim?" Related text: NCBI ROFL: Children smelling man-sweat… for science! NCBI ROFL: An analysis of uptight preschoolers. NCBI ROFL: Study proves elementary school bathrooms unpleasant.