The Cure for Eczema is Likely More than Skin Deep

The condition does more to the body than wreak havoc on the skin, prompting a need for better treatments. 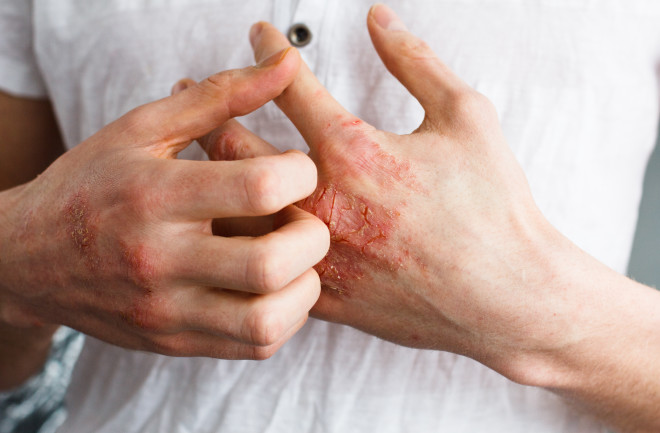 I’ve kept a stash of Band-aids in my backpack for as long as I can remember. Not so much for cuts and scrapes, but rather for my eczema, a chronic, inflammatory condition that plagues my hands and fingers with dry, itchy patches of skin.

On the best days, my hands are just a tad dry; nothing a bit of lotion can’t fix. But the worst days bring a firestorm of vigorous itching, where I’ll scratch and scratch until my skin oozes and bleeds.

So I turn to the adhesive bandages, mostly to conceal my hands, once they’ve begun to look like something out of a zombie apocalypse film. For others with the condition, eczema can mean hiding in the bathroom during a date to scratch a persistent itch, or wearing certain types of clothes to conceal an unsightly patch of skin. Eczema, much like other skin conditions such as psoriasis, affects every patient differently, with varying degrees of severity.

For a condition that over 30 million Americans suffer from, it’s surprising how little is understood about it. We still don’t know what causes eczema, and it’s currently incurable. But scientists today are researching new treatments based on the idea that eczema is more than skin deep. Genetics and environmental conditions offer insight into how the condition can manifest. And differences at the cellular level offer hints as to why eczema seems to be linked to other conditions such as asthma and food allergies.

“I’ve always viewed eczema as not a skin disease, [but] a systemic disease that has a skin manifestation,” says Brian Kim, a dermatologist at Washington University in St. Louis who has seen patients with the condition for over a decade. New data from Kim and other researchers show that we might need to look inside the body to better understand what’s happening on the surface.

You probably know the immune system as the body’s army against viruses, bacteria and other invading pathogens. But what happens when the body mistakenly perceives a threat, causing the immune system to rush into battle mode with nothing to fight?

That’s what happens to patients with eczema. Allergens seep past the weakened top layer of skin, triggering cells to set off an immune response. Just like other autoimmune conditions, such as rheumatoid arthritis, the cells create inflammation in a specific area of the body — in this case, the skin.

Typically, eczema patients are advised to use thick lotions or steroid creams to protect against sustained inflammation and dryness. But new treatments are using a different method, instead directly targeting the proteins that cause inflammation in the first place.

In 2017, the FDA approved a drug called dupilumab, which halts the activity of two immune proteins known as interleukins. Normally, interleukins regulate immune function, but go haywire in eczema patients, kicking off an inflammatory response. Dupilumab has shown to be effective for many patients with moderate to severe eczema, but comes with a hefty price tag — typically around $37,000 per year in the U.S.

“The pathways that underlie [these conditions] are very much shared,” he says. The cascading development of multiple allergic conditions, often beginning with eczema, is known to dermatologists as the “atopic march.” But exactly how the conditions are related, Kim says, is the million-dollar question that doctors have been trying to answer for decades.

What Do We Know?

There is evidence to suggest these allergic conditions share some of the same genetic markers. A chicken-and-egg conundrum underlies dermatologists’ understanding of how these conditions start: Do genetic mutations cause patients to be susceptible to external allergens, or does frequent exposure to allergens make patients more likely to develop these conditions?

It’s likely a combination of both. Recent studies point to a mutation in the filaggrin gene as a key player in eczema’s weakening of the skin. Normally, the gene helps make the top layer smooth and hardened against invaders. But in eczema, patches of itchy, uneven skin allow H2O to ooze out, and the top layer to become drier and less protective against allergens.

In turn, frequent exposure to substances such as dust and pollen might aggravate the weakened skin even more. And an influx of allergens might travel to other areas of the body, helping spur conditions such as asthma.

But researchers still need more data to understand what balance of genetic and environmental factors put patients at risk, says Kim. For now, he and other researchers are working toward ways to keep symptoms at bay by examining the ways the body can help fight eczema. One answer may lie in stimulating a specific type of immune cell — one that’s already in the spotlight for helping cancer patients.

You may have heard about natural killer (NK) cells in regard to immunotherapy, a burgeoning field of cancer treatment in which doctors use the patient’s own immune system to target tumors. But a study conducted by Kim and colleagues shows the cells hold promise for targeting eczema as well. The report, published February in Science Translational Medicine, found that giving injections of an experimental medicine that boosted NK cell counts in mice successfully kept their eczema at bay.

Kim says the idea came from observing that many of his eczema patients were prone to the viral diseases in the skin. He recalls seeing young patients come into the hospital repeatedly with the same infections, after they’d already healed.

He started to notice a trend: The patients with recurring viral infections tended to have low NK cell counts. And since those cells tend to be the ones to fight off diseases and infections in the body, maybe a boost of NK cells could help patients keep their viruses at bay, as well as their eczema.

But how would these NK cells in the blood help target a condition that lives on the skin? Kim says that systemic nature of allergic conditions means that targeting the immune system as a whole could promote healing in areas of the body where eczema manifests.

The effectiveness of this strategy needs more research, including trials in humans. But if it works, the treatment could offer hope for millions of patients suffering from the condition.

The number of eczema cases is growing worldwide, and some data show that the demographics are changing, too — challenging the widely held belief that the condition appears in childhood and gradually fades with age. Many people develop it as kids and carry it into adulthood, and there are also instances in which people spontaneously develop eczema as adults.

In 2000, the American Academy of Dermatology reported that cases were rising in the U.S.: At the time, around 6 percent of the population had some form of eczema. Though more recent counts vary, a 2017 analysis found that nearly 10 percent of adults worldwide, and only 4 to 8 percent of children, had the condition.

What’s more, the number of reported eczema cases seem to be rising in tandem with other, related conditions, such as asthma. “Allergic diseases are on the rise across the board,” Kim says. “It’s a huge problem. We don’t know why that’s the case, though.”

One thing’s for certain: Eczema is a lot more than just a skin condition. It leads a complicated life below the surface, one that researchers have yet to fully unravel.