Christmas is an occasion for celebration, a private moment of inclusivity at the end of the year to celebrate the birth of Christ with food, family, and festivity. It would be a real shame to ruin the event with, say, a community-wide outbreak of a parasitic pork worm. In 1995, a small Christian community in the south of Lebanon encountered the curious little worm Trichinella when 200 people fell ill with trichinosis during the Christmas holidays. It would be one of the largest outbreaks of trichinosis ever reported and a Christmas tale for the ages. The life cycle of the Trichinella parasite relies on the appetites and proclivities of carnivorous animals. There is no true beginning or end to the cycle, only a continuous looping from mouth to gut to muscle, the worm swapping between meat-eating animal hosts, whether they be predators or scavengers. Pigs, rats, and dogs are the beasts most commonly implicated as hosts in the domestic sphere, but more exotic animals such as wild boar, walrus, and polar bear may also serve in the sylvatic or wild animal cycle of Trichinella. 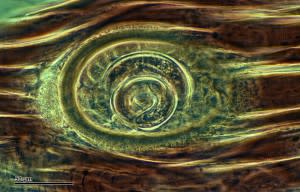 Larvae of Trichinella spiralis encysted in muscle tissue. Image: Josef Reischig. Click for source. These mammals gnaw on infected rodents or scavenge raw meat littered with encysted larvae. Once in the gut, the larvae shed their proteinaceous coats upon exposure to the stomach acids and migrate to the mucosa of the bowels to mature into adults. Over a period of weeks, larvae will be released and migrate to the muscly tissues of the body. The eyes, biceps and thighs, even the diaphragm, which assists in breathing, are all likely targets. There the larvae forms a cyst within the muscle awaiting for a new host. The worm's life cycle from larvae to adult is completed in one host, but the cycle begins anew when that host's infected larvae-bearing tissues are ingested by yet another carnivore, if and only if the infective meat is left raw or undercooked. Exposing the meat to heat kills the cysts and finally disrupts the cycle, preventing infection and the disease trichinosis. In humans, the symptoms of trichinosis include muscle aches, eye swelling and abdominal pain, consistent with the migration of the larvae through the tissues of the body. It is a short-lived and typically benign infection and can be treated with the anti-parasitic drug mebendazole. In rare cases, the larvae can migrate to the heart muscle or to the brain and cause serious disease and, rarely death. Human trichinosis is most common in countries with heavy pork consumption and with lax enforcement of agricultural sanitation, where pigs and dogs frequently feast on the remains of dead animals, including rodents. Though uncommon in the developing world, trichinosis is one of the most common parasitic infections affecting humans and mammals worldwide, largely due to the worm's ability to adapt to nearly any host and with many species adapted to almost every type of climate and environment except for the desert. In equartorial Africa, Trichinellanelsoni infects hyenas and cheetas, while the Arctic species T. nativa infects polar bears and arctic foxes. Human infection with Trichinella is a truly global phenomenon and has been reported among Alaskans after eating raw walrus, Zimbabweans dining on Nile crocodile, and pig farmers in rural Argentina.(1) Incidence of the disease is now extremely rare in the United States, with cases recently reported mostly in hunters after eating uncooked wild game, although autopsies in the 1940s examining respiratory diaphragms for evidence of the cysts found that 1 in 6 Americans were likely infected. (1)(2) As it turns out, the population of a rural Christian village in south Lebanon may also be included among the list of notable communities afflicted by this curious worm.(3) In 1995, families in this enclave purchased the makings for kibbeh nayeh, a traditional festive Lebanese dish consisting of minced raw meat of lamb or beef with bulgur, onion, and spices in preparation for the celebration of the upcoming Christmas and New Years holidays. Approximately three weeks after Christmas, people began trickling into clinics and infirmaries complaining of fevers, muscle aches, eye swelling and conjunctivitis, as well as abdominal pain with vomiting and diarrhea. A total of 63 people sought relief for their symptoms, of which patients 44 people were definitively diagnosed with trichinosis given their physical exam findings and positive lab work. An investigation into the outbreak, however, identified that the number of infected was more likely to be on the order of 200, an estimated 20 to 25% of the population, with many villagers either asymptomatic or with a light infection with tolerable symptoms. All patients recovered completely though 11 were hospitalized for relief of their symptoms. The culinary culprit of the outbreak was identified as infested pork from a single village butchers traced to a shipment of live pigs from northern Lebanon. Throughout every household in this village, the pork was left uncooked and minced with bulgur and spices to craft the kibbeh nayeh for holiday meals. A microscopic examination of leftover meat from the butcher identified the characteristic encapsulated larvae secreted along the porcine muscle fibers that would have unfurled in the guts of everyone dining on pork kibbeh nayeh in December and January and caused the abdominal cramping, muscle aches, and orbital swelling. This region had been previously afflicted with holiday outbreaks of the pork worm. In the largest outbreak in 1982, a staggering 6,440 people in four villages became infected after consuming kibbeh nayeh during the end of the year holidays.(4) Another outbreak occurred in 1981 affecting 100 people.(5) However, it is not only Christian Arabs who have been susceptible to this special holiday trichinosis - in 2005, 47 Thai migrant agricultural workers in Lebanon became infected with Trichinella after dining on festive dishes made with wild boar.(6) As many of the authors of these reports have noted, educating the Christian population in this region on safe cunitary practices for pork is paramount, as cooking pork to at least 170 F (77 C) or even freezing it to 5 F (-15 C) will kill the parasite and prevent infection. Alternatively, public health officials in the region might address the issue by urging celebrants to switch to other meats that are far more commonly associated with kibbeh, such as lamb and beef, two omnivorous animals that are very rarely associated with the Trichinella life cycle. If not, these villagers can continue to expect further visitations from this most unwelcome guest to their Yuletide feasts. ResourcesOne Parasite’s Rise Amidst the Soviet Union’s DeclinePoisoned with ParasitesReferences 1) J Dupoy-Camet (2000) Trichinellosis: a worldwide zoonosis. Veterinary Parasitology.93: 91–200 2) R Muller (1993) Worms and Human Disease. 2nd Edition. New York, NY: CABI Publishing 3) M Haim et al. (1997) An outbreak of Trichinella spiralis infection in southern Lebanon. Epidemiol Infect. 119(3): 357-62 4) Olaison L et al. (1992) An outbreak of trichinosis in Lebanon. Trans R Soc Trop Med Hyg.86(6):658-60 5) Blondheim DS et al. (1984) Trichinosis in southern Lebanon. Isr J Med Sci. 20(2): 141-4 6) E Marva E et al. (2005) Trichinellosis Outbreak. Emerg Infect Dis. 11(12):1979-1981