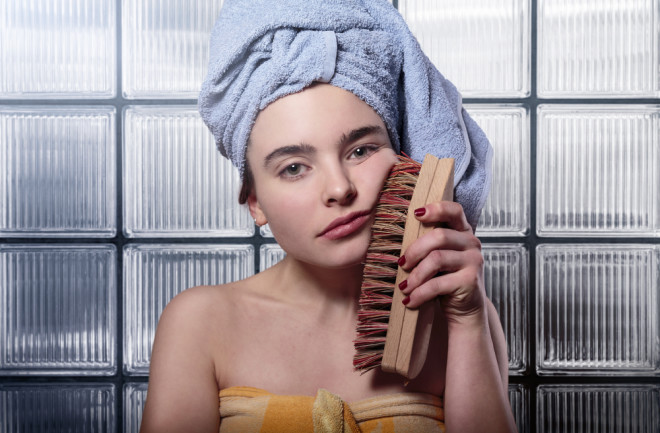 Cringing at a new outbreak of pimples the morning before the big meeting? Heart sinking in front of the mirror at the sight of red sores that just won’t clear up? You’re definitely not alone. Adult acne is one of those rare traces of teenhood that many adults can’t shake.

A common misconception is that acne isn’t normal in adulthood. “There's this pervasive idea that acne is only for teenagers, but it's really not,” says Ainah Tan, a dermatologist in Illinois who specializes in adult acne.

Social media, she says, has made matters worse, with an influx of photo filters that create the illusion of flawless skin. “There's a lot of pressure, especially in my female patients,” she says. “They feel like they should have grown out of this acne.” She tells her patients that even Kylie Jenner uses a filter.

A number of factors affect the likelihood of being stuck with the pesky condition: age, genetics and hormone levels, to name a few. The good news is, there are ways to minimize the likelihood of getting it, and even a few effective remedies that might eliminate it in the long haul.

Who Does Adult Acne Affect?

Adult acne is widespread, but adult women tend to get acne at higher rates than men. Numbers vary, but one 2008 study found that in all age brackets, women were significantly more likely to experience acne than men; in their 20s, for example, over 51 percent of women vs. 42.5 percent of men reported having acne, with declining rates for higher age brackets. In another study, 41 percent of women ages 25 to 40 experienced acne, and many participants had never had it as teens. Acne can also persist beyond menopause.

Some research has found that Black and Latina women experience clinical acne more than Indian, Asian and white women. But it all comes down to the same process taking place under your skin.

While acne is a cosmetic issue, its effects can go much deeper. Beyond the inconvenience of an undesirable blemish, and the scarring it can cause, acne in adults can have a serious impact on psychological well-being. Research suggests that adult women with acne have experienced symptoms of anxiety and depression, anger, problems with self-image and trouble concentrating on work or school.

What Is Acne, Really?

Here’s what actually happens in your skin to form a zit: A hair follicle becomes clogged with natural oil, known as sebum, along with dead skin cells and bacteria. This is accompanied by inflammation, part of the body’s immune response, which is what causes the redness and swelling. The more sebum and bacteria, the more acne. But then things get tricky.

Part of what makes acne so difficult to treat is that there are many contributing factors. Hormone fluctuations spur many acne flare-ups. So, changes in women’s hormones during menstruation, pregnancy or menopause makes acne more common in women.

“Often what happens, especially with a large portion of the female population, is they have monthly flares with maybe three or four big pimples,” says Emil Tanghetti, medical director at the Center for Dermatology and Laser Surgery in Sacramento, who has researched the impacts of adult acne on women.

Fluctuations in testosterone can happen during other shifts in hormone production, like stopping birth control pills. Similarly, emerging evidence suggests that the hormonal treatments transgender men undergo, which increase androgens like testosterone, cause the ratio to change and lead to increased acne for months.

Genetics can contribute to adult acne, as well as certain health conditions and skincare routines. “We do know severe acne tends to run in families. But also, each woman's biology is very different,” says Tan. Certain medical conditions cause acne, like polycystic ovary syndrome, a hormonal disorder that can cause irregular periods and elevated androgens. These hormones, including testosterone, are responsible for facial hair, voice change and other masculine characteristics.

What your skin endures throughout the day can also have an effect. Laura Ferris, dermatology researcher at the University of Pittsburgh, says adults who exercise regularly or wear something that traps sweat on their face, like a headband or helmet, can have breakouts. Changes to everyone’s unique biological makeup, like a new skincare product or increase in sebum production after pregnancy, can also mean it’s time to wash your face more often or change up a skin-care routine.

So, does sleeping in your makeup cause acne flare-ups? Is eating chocolate a sure path to pimply skin? As is the case many predicaments of the body, it depends.

Comedonal acne generally refers to small blackheads or whiteheads, as opposed to deep, inflamed sores (acne vulgaris). “If you do have on heavy makeup, that can clog up pores and it can give you more of the comedonal type acne. Definitely, there is something to that,” says Ferris, adding that not washing your face can mean more bacteria buildup.

On the other hand, Tanghetti says “most people don't use a heavy, occlusive [pore-clogging] makeup, so makeup doesn't really cause acne.” When in doubt, says Tan, look for makeup labelled “non-comedogenic,” which means it has been formulated not to clog pores. A more likely acne exacerbator is sweaty sheets, Tanghetti adds.

As for chocolate, the jury’s still out. One study found that eating chocolate was more likely to cause acne than eating jelly beans. Another study followed a group of 25 men over four weeks eating regular amounts of dark chocolate, and reported that their acne increased. But it’s unclear whether or not the increase was due to other ingredients, like dairy or sugar.

Evidence suggests that low-glycemic diets can also reduce acne. Low-glycemic diets cut out processed, starchy foods, sweets and some sugary fruits in favor of legumes, whole grains and other fruits and veggies. Research also indicates that dairy intake can be associated with increased acne. Tan says that, anecdotally, some of her patients who cut out dairy have showed a marked improvement in their skin, but that the science is inconclusive.

Despite what those Instagram ads for skincare would have you think, there’s not a one-size-fits-all treatment for acne. Nor is there a true cure. But a combination of a good skin care routine, over-the-counter topicals and prescription medication can give you a fighting chance at freedom from adult acne.

“There's not a cure, but there is a way to improve the appearance and decrease the amount of flares by routinely using medication or topical, over-the-counter things,” says Tan. “An oldie but a goodie that I really like is benzoyl peroxide-based washes. I think that people shy away from them because they’re all these old brands like Panoxyl and Clearasil, but they actually really work if you're consistent about using them.”

Salicylic acid and azelaic acid are other options: Salicylic acid exfoliates the skin and prevents the buildup of dead skin cells, while azelaic acid can reduce inflammation and kill bacteria on the skin, much like benzoyl peroxide.

Stronger prescription products applied on the skin, like retinols and retinoids, are the next step. These products, derived from vitamin A, help the skin to regenerate, and can also help reduce wrinkles. Antibiotics like minocycline can also help clear up acne short term. Spironolactone, a mild diuretic, is also prescribed to women to regulate hormones, which, like oral contraceptives, can clear skin. Oral medication like isotretinoin (a common brand was called Accutane), can be prescribed for severe acne, but can come with severe side effects.

In general, the dermatologists agree: Get into a habit of regular face washing and applying a non-comedogenic, gentle moisturizer. And because everyone has different skin, it’s best to see a dermatologist for a personalized assessment before shelling out for over-the-counter remedies at the local pharmacy.

In a pandemic, though, we’re covering our faces. “Of course, if you have a face mask, it doesn't really matter much,” says Tanghetti. So, adult acne may be just another one of many worries to table until later.