A woman’s extreme abdominal pain points to gallstones. But why is her heart rate going through the roof? 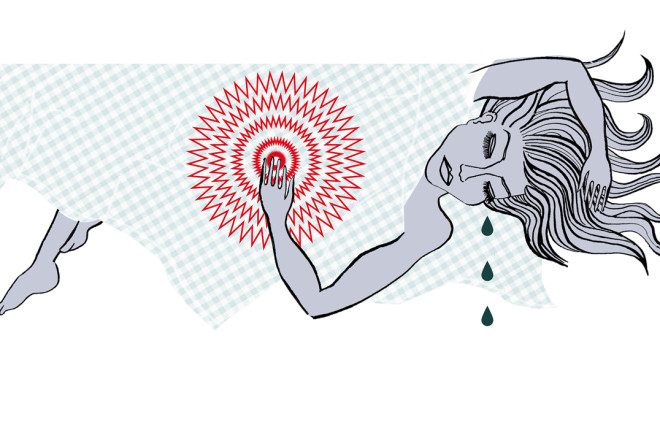 My pager sounds so much louder at night. The day’s commotion of physician rounds, family visits and discharges disappears into the quiet stillness of the night shift. The pager’s alarm-clock insistence, grating at the best of times, now bursts upon my eardrums like the siren of a squad car.

“Patient having 10/10 abdominal pain,” the message reads. “Can you come up and see her?”

Like fatigue or shortness of breath, abdominal pain is one of those symptoms that could represent anything. It could be as benign as constipation or as serious as a surgical emergency.

I study Elaine’s chart. She’s 41 and in good overall health, despite high cholesterol and gallstones. She was admitted with abdominal pain this morning, with the presumption that she had an inflamed gallbladder. However, an ultrasound was inconclusive.

“How are you feeling?”

Elaine turns her head; she doesn’t need to tell me. Her thin frame lies straight as a board, arms stiffened at her sides. She is drenched in sweat, the beads on her forehead coalescing with tears as they slide down her cheeks. When patients are in terrible pain, they’ll tell you it’s the worst pain they’ve ever felt or, if given a scale, tell you it’s a 10 out of 10. But there is a certain point at which pain becomes unspeakable.

Her blood pressure is fine, no fever. Her respiratory rate is 30 breaths per minute. Most worrisome, her pulse is 140 beats a minute. While lying in bed, yours is about 70.

“Can you show me where it hurts?”

With her clenched fist, Elaine motions to her upper abdomen. I place my hand on her belly, just below the rib cage. “Here?”

She squeezes my hand in acknowledgement. I press gently. There’s a strategy to this. If an organ is tender, it’s likely inflamed, and that may mean that surgery is in order. If the right lower quadrant is tender, the appendix may be the culprit. If the right upper quadrant hurts, we might suspect the gallbladder.

As I apply pressure to each quadrant, I gauge Elaine’s reaction to see where the pain is worst. Since I know she has stones in her gallbladder, I expect the right upper quadrant to be most tender. But it isn’t. What’s puzzling is that she winces equally no matter where I press.

The rest of the exam is normal, aside from her pounding heart. It’s going remarkably fast, but excruciating pain can raise your heart rate.

“Elaine, I’m going to figure out what’s happening to you.”

I take her hand. She locks eyes with me, silently pleading.

Despite my promise to Elaine, I’m more confused than when I went in. A patient admitted for gallstone-related pain has worsening abdominal pain. This should be an easy call. But the lack of a pattern of pain clouds the picture. Staring at the ceiling as I walk, I mentally shuffle the possibilities. Is it her bile duct? A perforated stomach ulcer? Her pancreas?

“Let’s get a set of labs,” I say to Carla, a nurse, “and an abdominal CT scan.” Translation: Let’s snap a picture and hope the answer will reveal itself.

Carla calls Radiology while I order blood tests for the liver, gallbladder and pancreas. Tests for infection and inflammation. Medications for pain and nausea. But what else?

I remember a lesson I learned early on: Most of the time, patients will give you all the information you need to make the correct diagnosis. Elaine didn’t have the strength to give me much description, but I have the physical findings. Disease leaves behind a crime scene strewn with evidence. I just have to become that detective who connects the black footprints to the smell of ash in the air and identifies the killer as the chimney sweep.

So I go back to the evidence, back to Elaine’s room. “Can you show me again where the pain is worst?” I want to see if the location is consistent. With her fist clenched, she motions to the upper abdomen.

I catch Carla back at the nursing station. “Let’s do an EKG and cardiac enzymes.”

“You think she’s having a heart attack?” she says. “I thought it was more abdominal pain.”

“It’s possible. We have to at least rule it out.”

It’s not uncommon for chest pain to masquerade as abdominal pain, so cardiac tests should be run on anyone in Elaine’s situation, especially with her heart rate of 140. But Elaine also offered a hint.

In old medical textbooks, the placement of a fist over the chest to express pain is known as Levine’s sign. It’s named for the cardiologist Samuel Levine, who reported in the 1960s that many of his patients used that gesture to indicate chest pain. He was also one of the first to suggest that the pain of a heart attack can mimic that of someone who needs immediate abdominal surgery.

“Here’s the EKG.” Carla hands me the electrocardiogram printout. It seems clear to me. It must be a heart attack.

“Cancel the CT scan,” I say. “We have to activate the catheterization lab, and she’ll need to be transferred to the cardiac ICU.”

I tell Elaine what’s happening as she’s rolled to the intensive care unit.

“This is just awful.” Carla breaks the silence as we stand outside the cardiac ICU, the intensive care staff scurrying to prep for the catheterization. “I mean, first your husband cheats on you, and the next thing you know, you’re having a heart attack.”

“Wait, what? When did her husband cheat on her?”

“Elaine told her day nurse that she just found out he had been cheating on her for years,” Carla says. “She confronted him about it a few days ago. Now she’s thinking of divorcing him. So sad. They’ve been married over 10 years.”

It’s as if, at the scene of the crime, I’ve just uncovered a shred of the perpetrator’s clothing. I pull aside the ICU doctor to share what I’ve learned, and together we roll the ultrasound machine into Elaine’s room.

We decide to do a quick echocardiogram to check how her heart is working.

When someone has a heart attack, an echo will usually reveal that one part of the heart is not moving properly. The blood vessel to that side has been blocked, depriving the muscle tissue of oxygen, so it stops moving. However, the rest of the heart, unaffected by the blockage, should pump relatively normally.

In Elaine’s case, though, the images on the screen show that her entire heart is moving abnormally. What’s more, one area in the left ventricle pumps in a balloon pattern. It’s a finding that argues against a heart attack. In fact, it suggests a diagnosis of Takotsubo cardiomyopathy, also known as broken heart syndrome.

Named after a Japanese octopus trap (which is balloon-shaped), Takotsubo cardiomyopathy is stress-induced heart failure. Extreme emotional distress can physically change the way the heart pumps. Not only is this often mistaken for a heart attack, since it can mimic the characteristic EKG and cardiac enzyme findings, but it can kill a person. No one is sure how this happens, but it’s thought that the surge in adrenaline caused by grief disrupts the functioning of heart muscle cells.

In Elaine’s case, her catheterization would confirm that she had no blockages in her heart. She did not have a heart attack, but that’s not to say that her heart had not been broken. Physically, her heart returned to normal in a few weeks. Like any broken heart, one affected by Takotsubo cardiomyopathy needs time and supportive care to heal.

[This article originally appeared in print as "Night of Broken Hearts."]