The psychological symptoms of Lyme Disease can sometimes mimic mental disorders, which can lead to misdiagnosis. 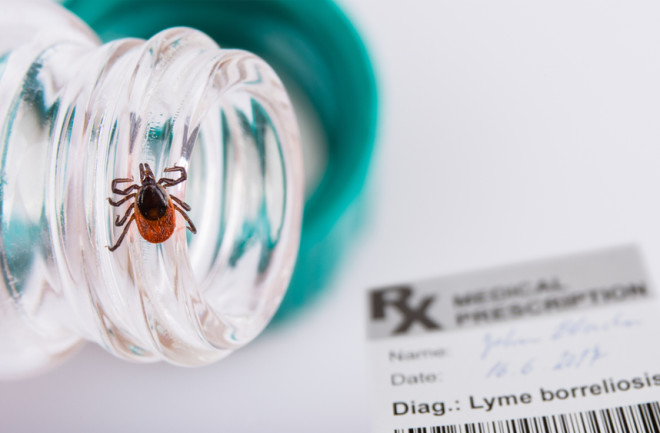 During her dozen years as a mental health counselor, Christine Hammond’s patients have visited her with a litany of troubling psychological symptoms: severe depression, anxiety, paranoia, delusions, hallucinations and even brief psychotic episodes.

But for some of these patients, the cause of their seemingly textbook mental issues isn’t from an anomaly of brain chemistry or function, but from Lyme disease – the most common vector-borne disease in the U.S.

The Centers for Disease Control and Prevention records about 30,000 cases of Lyme disease annually. Although the true number of infections – commonly caused by the Borrelia burgdorferi bacteria – may affect upwards of 475,000 people each year.

This number is far more than diseases like West Nile Virus, Dengue fever, and malaria, all which blood-feeding arthropods like mosquitoes, ticks and fleas spread. Lyme is acquired through the bite of blacklegged ticks – also called deer ticks – which carry the infecting bacteria.

Although typically the disease consists of skin rashes, fatigue, headaches and fever – which antibiotics can treat in a couple weeks – some patients develop wide-ranging physical and psychological symptoms that cause chronic impairment of normal functioning, long after the infection should be gone.

For those who don’t even know a tick bit them, doctors either misdiagnose these clusters of chronic symptoms or dismiss the patient as psychosomatic. Hammond has seen both.

“There really isn’t a whole lot of information out there about Lyme and how it impacts people from a mental or psychological standpoint,” says Hammond. “I think it’s so important that the mental health community just pays attention to what I would consider […] issues which appear to be psychological, but really, they’re medical.”

While some patients came to Hammond already diagnosed with Lyme, others became patients after misdiagnoses. One was given a fibromyalgia diagnosis, while another was told they had early onset Alzheimer’s disease and began receiving treatment for it.

Officially reversing those diagnoses for the right ones through specialists like neurologists, she says, can sometimes take up to a year or two.

Another patient – whom Hammond wrote about in a 2019 article about the overlap between Lyme and mental issues – dealt with anxiety, depression and brain fog. A medical doctor ran tests but could not establish a conclusive diagnosis, and labeled the patient psychosomatic.

If medical professionals dismiss patients, Hammond says, it can sometimes worsen their mental symptoms, especially depression and paranoia. The frustration of not finding acceptance or proper treatment can then lead to desperate and tragic outcomes.

“I had several clients who not only were suicidal but attempted suicide as a direct result of not being taken seriously for their Lyme disease,” Hammond says.

Overlap of chronic Lyme symptoms with other diseases leads doctors to reach wrong or inconclusive decisions, says Daniel Cameron, a New York-based medical doctor who runs a private practice specializing in diagnosis and treatment of Lyme disease and other tick-based illnesses.

“A lot of times a doctor recognizes that someone is ill, but Lyme disease is such a hot subject they often will pick something else like fibromyalgia or chronic fatigue as a diagnosis,” Cameron says.

When testing a patient for Lyme, Cameron says a doctor will usually check for liver, kidney, blood count and thyroid abnormalities. If no clear case of disease is present, antibody testing for common tick-based illnesses is then conducted to potentially get a Lyme diagnosis.

Even for doctors that treat Lyme, however, many are unwilling to continue treatment past the common short-term use of antibiotics.

“If you don’t get better in two weeks, they’re reluctant to overshoot the odds,” Cameron says. “There has to be a little more flexibility, in terms of doctors looking at someone with Lyme.”

When Hammond began seeing Lyme patients, she was surprised to see psychological symptoms of Lyme that mimicked disorders laid out in the Diagnostic and Statistical Manual of Mental Disorders.

Although she lacks the medical training and knowledge of a medical doctor, Hammond frequently encourages her patients to seek additional neurological testing, especially if their symptoms are not dissipating with therapeutic help or medications.

Many have done so and found they had Lyme instead. And once properly diagnosed and treated, their mental issues often improved even if their physical symptoms did not.

“I think we do a great disservice when we don’t take our clients seriously and believe them, and really pay attention to what they’re saying, and look for other solutions that are maybe outside of the box,” says Hammond.

That, however, may be changing thanks to the COVID-19 pandemic. Hammond, along with doctors across the country, are seeing a growing number of patients with what’s known as “long Covid.”

Like chronic Lyme sufferers, these patients are reporting varying clusters of symptoms that continue to impact their health for weeks, months or over a year after their infections disappear.

“A lot of the symptoms and issues that people have had with Lyme also are now appearing with long-term COVID,” Hammond says, noting severe and recurring depression is chief among the symptoms.

Hammond hopes this will lead more doctors and counselors to provide Lyme patients the help and support they truly need to help them lead better lives.

“As mental health practitioners, we have a responsibility when we have a patient that comes into see us, to take them seriously and really be the support that they need,” she says. “The difference that that makes is just huge.”