The blue jays are coming! Hide yo kids, hide yo nuts! 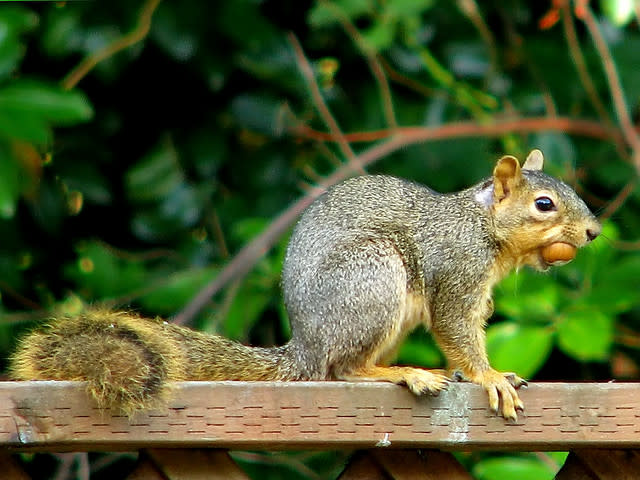 Well, if you're a squirrel, you would actually be less likely to hide your nuts if you thought a blue jay was nearby and watching you. That's because blue jays, who also hide nuts for later snacking, will watch squirrels hiding their tasty morsels and then steal them. The research in this paper shows that squirrels are less likely to take whole nuts that can be hidden (versus shelled nuts that must be eaten immediately) from feeding stations in the range of stereo speakers playing blue jay calls. This indicates that squirrels are aware of the problem. That's nuts!Eavesdropping squirrels reduce their future value of food under the perceived presence of cache robbers. "Caching behavior frequently occurs within a social context that may include heterospecific cache pilferers. All else equal, the value of cacheable food should decline as the probability of cache recovering declines. We manipulated gray squirrels' (Sciurus carolinensis) estimate of the probability of cache recovery using experimental playbacks of the vocalizations of a potential cache robber, the blue jay (Cyanocitta cristata). We used giving-up densities (GUDs) to quantify relative changes in squirrels' valuation of cacheable and noncacheable foods. We collected GUDs during playback experiments to test whether squirrels (1) eavesdrop on vocalizations to detect jay presence, (2) devalue cacheable food in the (perceived) presence of jays (i.e., perceive jays as cache pilferers), and (3) are sensitive to distant effects (i.e., lower devaluation of cacheable food at sites far from the perceived location of jays). Consistent with our predictions, squirrels decreased the value of cacheable hazelnuts by two nuts, on average, during jay playbacks, but only at foraging stations near the jay playback sites. We conclude that through eavesdropping, squirrels assess site-specific risks of cache pilfering and alter their caching behavior to reduce the likelihood of pilferage. Evidence suggests that tree seed consumers in eastern deciduous forests exist within a complex communication network." Related content: NCBI ROFL: Spring break: Prairie vole edition! NCBI ROFL: And… we’re back! With humping hamsters! NCBI ROFL: The identification of attractive volatiles in aged male mouse urine.