The Biology of Hand-Washing

The "handscape" is a territory filled with hideouts. Islands of grease give shelter to cold and flu viruses. 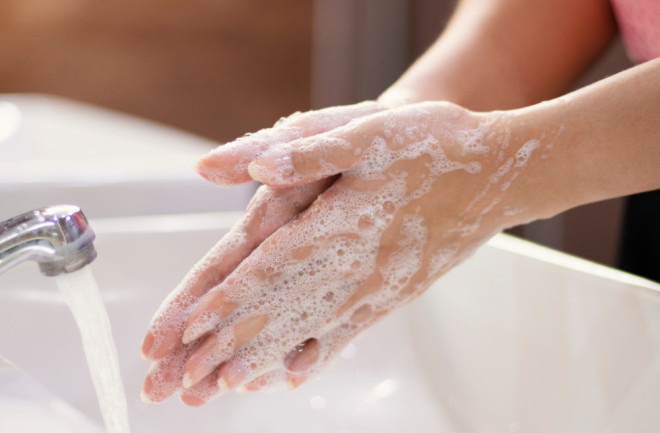 Seen under ultraviolet light, simulated germs glow from a hand’s wrinkles, cuticles, and“subungual spaces,” even after a normal hand-washing.

Zung Wan Kim, a surgeon in Port Chester, New York, preps for surgery like a prizefighter before a major bout. First he punches a soap dispenser button with his foot and delivers a low blow to a faucet switch with his knee. Then he rubs the soap over his hands for more than a minute and rinses it off with graceful left and right hooks under the stream of water. He jabs at his nails with a sterile brush for more than another minute, rinses, scrubs his hands with a sterile sponge, rinses again, and then repeats the initial wash and rinse. Ding! The bell goes off on Kim's timer, ending a full five-minute round of hand-washing.

Seem obsessive? Sure, until you consider that the life of the hernia patient next door depends on Kim’s routine. And recent events have shown that even ordinary hand-washing may once again become a matter of getting really sick or staying well. In August of this year, federal health experts reported that four children in Minnesota and North Dakota were fatally infected by Staphylococcus aureus, a bacterium easily passed through hand-to-hand contact. A strain of S. aureus has in recent years become resistant to the popular antibiotic methicillin. Yet any good hand-washing can still send it down the drain.

Lulled by the success of antibiotics in general, Americans have come to think of compulsory hand-washing as a thing of the past—a holdover from the sterile, hyperhygienic 1950s. But more than half the staph infections caught by hospital patients are now resistant to methicillin (up from 2 percent in 1974), and according to some epidemiologists, the deaths in Minnesota and North Dakota are just the tip of the iceberg. “With the possible exception of immunization,” says Ralph Cordell, an epidemiologist at the Centers for Disease Control and Prevention in Atlanta, “hand-washing is the most effective disease-preventing measure anyone can practice.”

To get a sense of just how many bacteria you’re carrying around, consider an interesting experiment performed back in the 1930s by physician Philip B. Price of Johns Hopkins University. Price set up 14 sterile enamel basins, filled them with warm sterile water, and washed his hands with plain soap for exactly one minute at each basin. When he was finished, he totaled up the bacteria in the basins and estimated their original population on his hands: 4.58 million. Later studies showed that the full census on a single hand can rise to as high as 200 million and may include viruses and fungi as well as bacteria.

Many of those organisms, such as Staphylococcus epidermidis, are native to our hands. Known as resident flora, they can cause disease but more often prevent it by crowding out and combating invaders. The more dangerous bugs are the transients that lurk on faucets and toilet-flush levers in airport rest rooms, on subway handholds, on public telephone receivers, and between the thumb and forefinger of the person you shook hands with at lunch. Up close, however, the bad guys don’t look much different from the good guys. For instance, when stained and magnified a hundred times, S. aureus and S. epidermidis both resemble clusters of merlot grapes (in Greek, staphylococcus means “grape berry”). But some transients clearly don’t belong on your hands. The intestinal bacterium Escherichia coli 0157:H7 (stains pink, looks from the side like long-grain rice) causes food poisoning in as many as 20,000 people a year. E. coli survives all too well outside the intestines, particularly on food. Patting contaminated ground beef into a hamburger, for instance, can leave a residue of about 10 million disease-causing bacteria on your hands.

The fingertips can offer safe harbor to bacteria for up to an hour, but they are hardly the best hiding places. Just look at your palms, Cordell suggests, using a 3-D microscope with a magnification of about 50. At this scale, the handscape is a territory filled with hideouts. Islands of grease give shelter to cold and flu viruses. They don’t grow here; they wait until your hands come in contact with the delicate membranes in your nose, eyes, or mouth, where they can infiltrate cells and duplicate themselves.

Some 400 to 500 sweat glands per square centimeter of skin pour out moisture onto your palms, irrigating crops of bacteria. The glands themselves look like miniature coal mines, each with a shaft leading down through the epidermis, the thickest layer of the skin, to a mazelike ball where sweat collects. On the backs of your hands, sebaceous glands and hair follicles make even better foxholes for bacteria.

The safest and most expansive microbial bunkers are under the fingernails, in what researchers have named the subungual spaces. “If the hand is a continent, the subungual spaces are the caves,” says Barry Michaels, a microbiologist with Georgia-Pacific, which makes paper towels and hygiene products. “They’ve been called ‘the area of the lost cities,’ because 95 percent of the bacteria found on our hands is under the fingernails.” It takes a full five minutes of washing, researchers estimate, to flush out, shed, or kill 99 percent of the transient organisms.

Bacteria lurk on the most innocent surfaces, awaiting our passing hands E. coli, for instance, can survive on a stainless steel counter for 60 days.

Most people, even most physicians, still don’t wash long enough, often enough, or well enough. In one study a few years ago, doctors and nurses in an emergency room washed up less than a third of the time after touching patients. And when they did use soap and water, the average wash-and-rinse was a mere 9.5 seconds. Hand washers typically fail to clean their fingernails, thumbs, the creases in their palms, and the backs of their hands. Dominant hands are often underwashed—if you’re right-handed, your left hand is usually the cleanest.

The solution is simple. Start with soap and running water at a comfortable temperature. (Antimicrobial soaps are unnecessary and they may help spawn bacteria resistant to antibiotics.) As soon as the soap hits your skin, islands of grease will begin to dissolve, exposing dormant viruses and living bacteria. E. coli and other intestinal transients will get caught up in the tide of soapy water during the first five seconds of the wash. Plain soap tears off the outer coating of flu viruses, rendering them inert. Hand-washing also flushes away yeast and other fungi, and the grapelike clusters of staph will soon slide away as well. Keep rubbing your soapy hands—in glee, if you like, at this microbial rout—for at least 15 seconds before rinsing. Admittedly, that is likely to seem like a long time. To be sure you don’t give up too soon, hygienists recommend washing for as long as it takes to sing “Twinkle, Twinkle, Little Star.”

If you do all this, you will wipe out as much as 95 percent of the organisms that were there before you picked up the soap. If you’re in a hurry, rub on an alcohol gel fortified with a skin-protecting emollient like glycerin, or wipe your hands with an alcohol-laden towelette. “There’s a huge body of research showing that alcohol hand rinses are actually much better at getting rid of bacteria than soap,” says Elaine Larson, a professor of pharmaceutical and therapeutic research at the Columbia University School of Nursing.

No matter how long you wash, the ancient flora will soon reemerge from hiding—from subungual spaces, sweat glands, hair follicles, and skin folds—and bloom again. For surgeon Kim and the rest of us, there will be many more rounds in this fight. But you know what to do: Shake hands at your own risk, and keep washing until that nursery song drives you nuts.

For more information on hand-washing, visit the “Compliance Control Center” at users.aol.com/comcontrol/comply.htm.