A few days ago Robin Hanson brought this chart of world population to my attention: 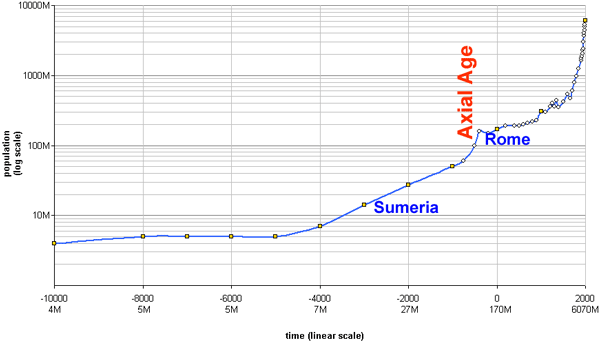 On the x-axis you have time, 12,000 years ago to the present. On the y-axis an estimate of the total world population log-transformed. The data is derived from the US Census low estimate. Granting the data's accuracy for the purposes of reflection, Robin's question was what could have occurred between 1000 and 500 BC to produce such a rapid population rise? My immediate response to Robin was that perhaps the transition from widespread utilization of bronze to iron democratized tool use so that more land was brought under cultivation. Bronze tools and weapons were the privileges of the elite because of the high capital investments for the production of the alloy. Stone or copper remained the norm for peasants. With the switch to iron per unit cost of production for metal tools went down. There is a hypothesis for example that only extensive use of iron tools allowed for the clearing of the eastern Gangetic plain and the expansion of Indo-Aryan civilization to the Bay of Bengal. A second complementary suggestion I made is that biological changes in the horse allowed for the emergence of full-fledged nomadic lifestyles with the development of mounted cavalry. In Empires of the Silk Road the author makes the argument that Inner Asian nomadic groups were much more important in being facilitators for diffusion of ideas, and even the originators of ideas, than we give them credit for. A tentative assertion is made that the Axial Age itself was the work of horse riding nomads! Whatever the reality of that specific claim, one could outline a model where the free flow of ideas accelerated during this period because of the rise of mobile populations such as the Scythians, whose cultural domain spanned the whole Ecumene. And then there are even stranger ideas, such as Julian Jaynes' 'bicameral mind.' Thoughts? Image Credit: Waldir, Wikimedia Commons