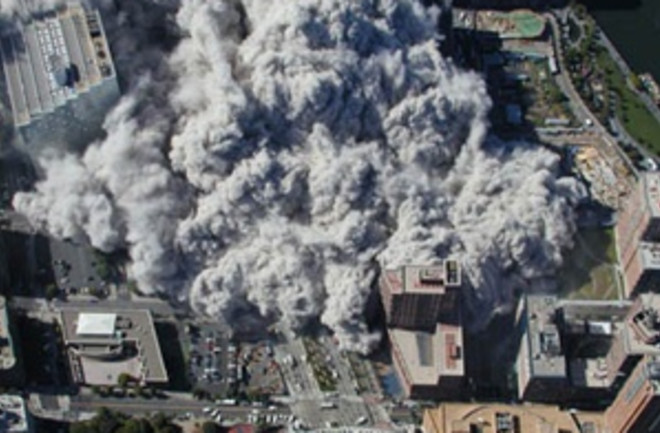 In the aftermath of the first explosion, the air over Lower Manhattan transformed instantly.

“The sky was glittering with glass,” says Nina L., a Tribeca resident who asked not to be further identified. She ran to her window and saw a shower of flaming jet fuel cascading from one of the towers.

“This can’t be a good thing to have my windows open,” she immediately thought to herself.

Nina closed her windows and shut her air conditioner flues. As a former jeweler, she’d worked around dangerous chemicals before and understood the hazards of toxic fumes. From her apartment seven blocks north of the World Trade Center, she sat transfixed until a second explosion jolted her into action.

Nina tore up an old pillowcase, fashioned a makeshift bandanna over her face, packed her cats into cages, and trekked northward.

“The whole neighborhood was blanketed in a gray snow,” she recalls. “Some people were walking by in moon suits.”

Although Nina could not have known it at the time, she had just entered one of the most dangerous atmospheric conditions ever to occur on American soil, and she suffers the consequences. She had chronic bronchitis until 2003 and still has esophagitis and sinusitis. Many health professionals believe others like her won’t experience the harsher, suffocating symptoms for several more years.

Up to 70 percent of first responders are ill as a result of 9/11 contamination. If a similar rate of illness holds true for those who lived and worked near the Twin Towers, the number of seriously ill New Yorkers could climb to 300,000 in the near future. About 70,000 New Yorkers so far have listed themselves with the World Trade Center Health Registry, a database that tracks the health impact of the 9/11 attacks. The registry has been criticized for excluding large numbers of those potentially sickened outside a designated one-square-mile area. Despite the insistent denials of city and federal officials, tens of thousands of New Yorkers were unnecessarily exposed to a chemical brew without even the most rudimentary precautions. Today New York City is still mired in a fog of cover-upsand half-truths regarding its environmental welfare.

Civil rights attorney Felicia Dunn Jones, who worked a block from the towers, was caught in the initial deluge of dust when the towers fell. Although her family rejoiced upon her return home, Dunn Jones developed a serious cough the following January. She died barely five weeks later of sarcoidosis, an immune disorder caused by toxic exposure. Dunn Jones’s name will be added to the list of victims when the memorial is completed in 2009, and the honor isn’t just a token gesture. The addition of her name is a hard-won acknowledgment that exposure to 9/11 contaminants can lead to death.

David Worby, a personal injury lawyer, is representing more than 10,000 individuals who claim they’ve suffered serious illness as a result of 9/11. Already, 130 of them have died of causes similar to Dunn Jones’s, though Dunn Jones was not a client of Worby’s. Worby is critical of government officials for their overly sanguine assurances about the safety of the air and is especially critical of the city’s lax enforcement of federal requirements that respirators be worn at contaminated sites.

“They are getting sick because of people like Christie Todd Whitman and Rudy Giuliani,” Worby says. Whitman was administrator of the Environmental Protection Agency, and Giuliani was the mayor at the time the towers fell. “My people don’t want their names to be on the wall, because they are not victims of terrorists—they’re victims of bad government. Giuliani should be banned from public office for what he did.”

New York City, the Port Authority, and the contractors who were responsible for the cleanup (Bovis and Turner Construction) are all defendants in the Worby lawsuit.

“I started this suit on behalf of one cop that got sick,” Worby says of his class-action lawsuit filed in 2004. “Nobody would touch the case with a 10-foot pole because it was considered unpatriotic to say anything against the cleanup or the EPA. We have come a long way. They once called the 9/11 cough a badge of honor. Now they know that the whole thing is a catastrophic government disaster.”

Since the attacks, various scientific studies have demonstrated that New Yorkers are engulfed in billows of illness and disease related to 9/11. First the 9/11 cough and mental health problems caught the attention of local doctors. Then chronic respiratory and gastrointestinal conditions began to surface. Recently a program at Mount Sinai noted the emergence of rare blood cancers among 9/11 first responders. Experts predict that more problems will surface in the next few decades.

While the progression of diseases continues to unnerve New York residents, more people are asking why basic health and safety standards were ignored and violated in the wake of the attacks. One nonprofit organization, the New York Committee for Occupational Safety and Health (NYCOSH), keeps a diligent watch on 9/11-related issues.