Infectious diseases have long been the companions of war and natural disaster. For those that barely escaped death in the calamities of antiquity, walking away with what appeared to be a light injury, the agony of a gangrenous wound or convulsive, back-breaking muscle spasms would deal an impending final blow. For centuries, a dreaded complication from an innocent blister or a bullet wound was the untreatable and catastrophic tetanus, caused by Clostridium tetani.

Clostridium tetani resides in the environment, forming spores amidst soil and leaves. It is everywhere: it can be found in a thimbleful of loamy soil pulled from the ground of the southern United States, and it is just as much at home in the fetid muck of the jungles of southeast Asia. So long as it remains on the far side of our skins, and the borders of our bodies remain battened, we are safe. The moment our defenses are compromised, whether by the scratch of a rose thorn or a blister on the sole of a foot or a traumatic amputation, and tetanus-laden earth gains access to our the body, it is another matter altogether. Tetanus, in short, takes advantage of our carelessness. 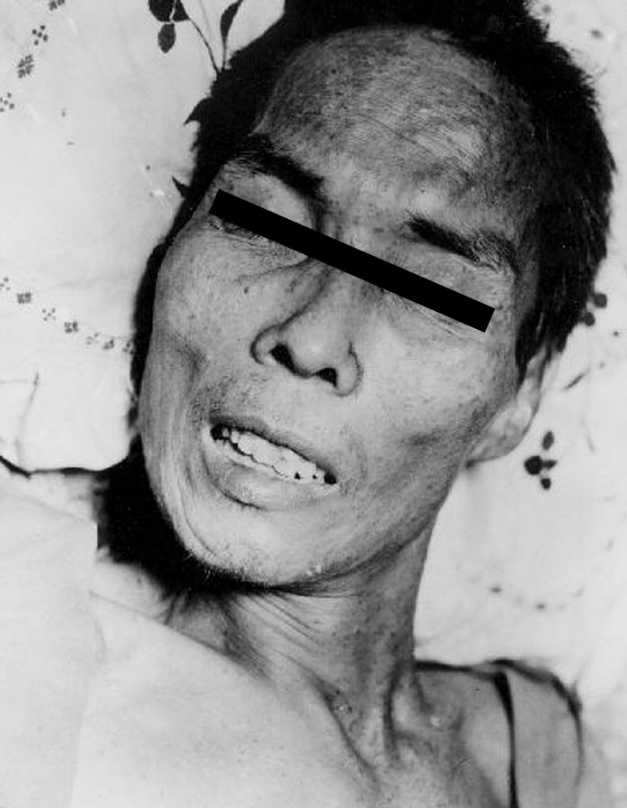 The face of a Filipino man with tetanus showing the characteristic "risus sardonicus," the bared teeth and contracted facial muscles. He was presumably infected from a hand wound struck by shell fragments. Image: CDC/ AFIP/ C. Farmer.

The face of a Filipino man with tetanus showing the characteristic “risus sardonicus,” the bared teeth and contracted facial muscles. He was presumably infected from a hand wound struck by shell fragments. Image: CDC/ AFIP/ C. Farmer.

Tetanus is unlike many other bacteria in that the disease that it provokes is not so much an infection but an intoxication with a microbe-made poison. Embedded soundly in a enclosed and airless wound, C. tetanipumps out tetanospasm toxin, which acts on the central nervous system much like the pesticide and poison strychnine. Tetanospasm is one of the most potent toxins in the world and works by irreversibly blocking the release of inhibitory neurotransmitters that work on the muscles, interfering with the natural rhythm of action and inaction of axonal nerve firing (1).

As a result of this blockage, the nerves fire continuously, over and over and over, leading to ceaselessly spasming muscles. The stronger muscles of the body dominate in this response, forming an agonizing posture known as opisthotonus: the extensor muscles of the back arch backwards and lock, and the arms flex to the chest with fists clenched. The sustained muscle contractions in the back are so powerful that they can break the spine. The crushing muscles of mastication clamp down to form the hallmark of the disease, lockjaw. An unnerving and unintentional grin that bears the teeth, known as risus sardonicus, results from contracted facial muscles. The respiratory and laryngeal muscles can spasm as well, obstructing the passage of air and causing death. Convulsive seizures, too, may occur.

The horror and anguish of this bacteria is made plain in a painting from the early 1800s by the surgeon and artist Sir Charles Bell, in which the artist depicts a soldier locked tight in the throes of agonizing tetany. In 1809, for the purposes of studying gunshot wounds, Bell volunteered to operate on battle-tested soldiers in the Battle of Corunna, one of many in the long saga of the Napoleonic Wars. He would later describe his experience as wholly devoted to amputating the limbs of the wounded.

While I amputated one man’s thigh there lay at one time thirteen all beseeching to be taken next, one full of entreaty, one calling upon me to remember my promise to take him, another execrating. It was a strange thing to feel my clothes stiff with blood, and my arms powerless with the exertion of using the knife! (3) 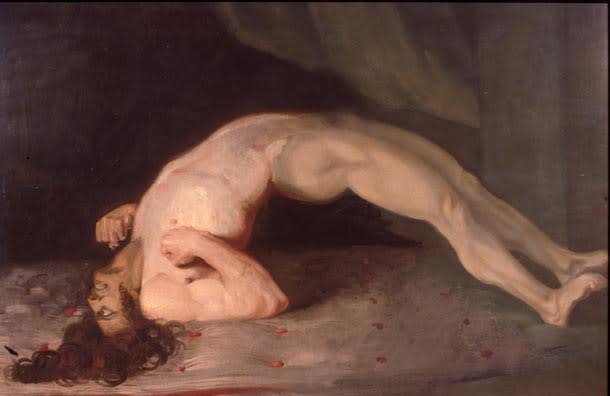 “Tetanus Following Gunshot Wounds," 1809. By the surgeon and artist Sir Charles Bell, the painting depicts a soldier suffering from tetanus.

“Tetanus Following Gunshot Wounds,” 1809. By the surgeon and artist Sir Charles Bell, the painting depicts a soldier suffering from tetanus.

Bell brandished not only a scalpel, but also a pencil, making detailed sketches of his patients and the wounds caused by bayonets, cannon-balls and musket fire. He would later elaborate this work into thirteen colored lithographs for a series, “The Wounded Following the Battle of Corunna.” One of these prints, “Tetanus Following Gunshot Wounds,” is the most well-known and harrowing of the series, and serves as a striking testament to one of the more deadly and excruciating complications from a bullet. Bell captures the clinical presentation of tetanus flawlessly, as described by a physician that treated an infant sickened with tetanus in 1859.

This drawing tells the wrinkled forehead; the elevated brow; the closed eye; the dilated nostril; the rigid masseter; the fixed jaw; the closed mouth; the corrugated lips; the bubbling saliva; the retracted head; the shortened neck; the starting cervical muscles; the turgid veins; the arched spine; the raised chest; the troubled breathing; the catching diaphragm; the heaving abdomen; the separated arm; the squared elbow; the bent wrist; the clenched fingers; the incurved thumb; the extended and separated legs; the bent down toes; the livid surface; the whole figure rigid as wood – a pitiful sight. (4) 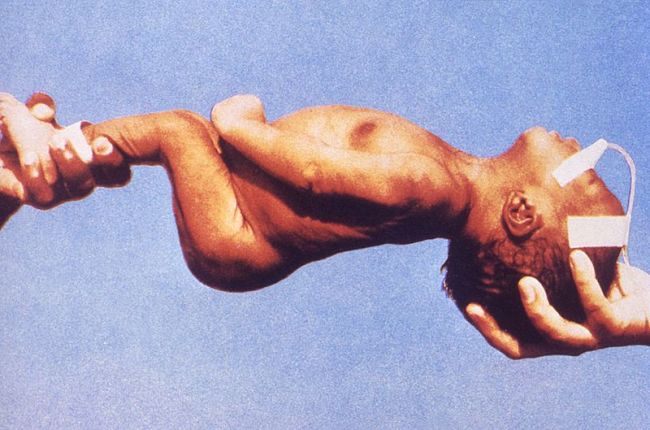 Opisthotonus in an infant suffering from neonatal tetanus. The infection can arise in infants born to unvaccinated mothers, who are unable to pass on their protective antibodies. The disease often results from cutting the umbilical cord with an unsterilized instrument, introducing the microbe into a susceptible wound. Image: CDC.

Opisthotonus in an infant suffering from neonatal tetanus. The infection can arise in infants born to unvaccinated mothers, who are unable to pass on their protective antibodies. The disease often results from cutting the umbilical cord with an unsterilized instrument, introducing the microbe into a susceptible wound. Image: CDC.

Not for another 75 years would the causative agent of tetanus be discovered by two Italian scientists, Antonio Carle and Giorgio Rattone. In 1884, the duo reproduced tetanus in rabbits by injecting them with pus from a fatal case of an acne infection gone terribly awry. In the early 1920s, the French veterinarian Gaston Ramon would use formaldehyde to inactivate the tetanus toxin, resulting in “toxoid” which could be injected in order to spark a proliferative response from the immune system, resulting in active immunization against the toxin. It is this vaccination, received every ten years, that is used to protect against tetanus today. Nowadays, the vaccine is coupled with diphtheria, another bacterium that induces disease by toxin production.

Today the incidence of tetanus is intrinsically associated with the levels of vaccination in a community, with an estimated half a million to a million cases of the infection occurring worldwide, most commonly among infants born to unvaccinated mothers (5). For those who have never received the tetanus vaccine or a booster shot within the last ten years and who then become inadvertently infected with tetanus, 50% will succumb to their disease, usually by respiratory failure (1). Examining Sir Charles Bell’s discomfiting painting of a soldier in the agonizing throes of tetanus, it would seem that this ought to be an sight obviated by the march of progress in our war against disease, and yet it is an image that is regrettably and needlessly recurring today, in the twenty-first century.

How should you encourage vaccination as a public good? Perhaps we should turn to … Star Wars? From the Body Horrors archives: Vaccinating Against the Dark Side

Sir Charles Bell was a surgeon, professor of anatomy, and prolific writer and artist. He also made multiple invaluable and ground-breaking discoveries in the field of neurology. Read more here.

Tetanus also affects animals. In this video of an infected goat, he shows the very same posturing and signs of tetanus infection in humans. Beware! May be upsetting to viewers!