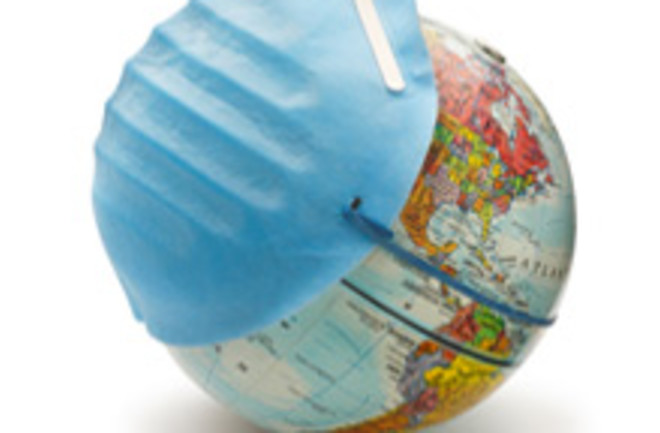 A "fast and dirty" analysis of the spread of swine flu thus far has led researchers to believe that the virus will eventually turn into a true pandemic infecting about a third of the world's population--but they hasten to add that the analysis also suggests that the flu doesn't have a devastating death rate. Lead researcher Neil Ferguson, a member of the World Health Organization's emergency committee for the outbreak, says:

"This virus really does have full pandemic potential. It is likely to spread around the world in the next six to nine months and when it does so it will affect about one-third of the world's population. To put that into context, normal seasonal flu every year probably affects around 10% of the world's population every year, so we are heading for a flu season which is perhaps three times worse than usual" [BBC News].

The analysis, published in Science, also roughly estimates that the flu has a fatality rate of .4 percent, meaning that it kills 4 people out of every 1,000 infected. That makes the swine flu virus

about as dangerous as the virus behind a 1957 pandemic that killed 2 million people worldwide. But it's not nearly as lethal as the bug that caused the 1918 Spanish flu pandemic [ScienceNOW Daily News].

Seasonal flu has a fatality rate of less than .1 percent, and kills more than 250,000 people each year. While global hysteria regarding swine flu has subsided somewhat, confirmed cases continue to mount. Yesterday, the World Health Organization said that swine flu has been confirmed in 4,694 people around the world, with the bulk of the cases in North America.

Sixty-one people have died, including 56 in Mexico, three in the U.S., and one each in Canada and Costa Rica, health officials said. The U.S. confirmed 2,618 cases in 44 states, according to the Centers for Disease Control and Prevention [Bloomberg].

One mystery is why the virus seems to cause more severe symptoms in young people: U.S. health officials say the median age of people hospitalized with swine flu is 15 years old. Researchers say that could be a troubling sign that young and healthy people are more vulnerable to the virus--but in a contradictory finding, researchers have also found that many of the people who have died from swine flu had preexisting health problems. One possible explanation, says Ferguson, is that flu viruses that resemble the current swine flu virus may be

commonly seen in normal seasonal flu epidemics. Adults are more likely to have encountered those viruses and developed immunity to them, and it may be that in some cases this immunity is enough to provide protection against swine flu [Nature News].

While the findings of this first analysis are far from definitive, they do suggest that world health officials should quickly decide whether to start production of a swine flu vaccine, which could be ready before autumn comes to the northern hemisphere, possibly sparking a new outbreak.

"One of the key decisions which has to be made this week by the world community is how much do we switch over current vaccine production for seasonal flu to make a vaccine against this particular virus?" [BBC News],