Superfreaks about the face

A few years ago I commented a fair amount on the topic of prosopagnosia, face blindness. Turns out that ~2% of the population can't really recognize faces, and this is a cryptic trait as many of these individuals have developed compensatory tendencies so that people don't know. Not only that, but there seems to be a strong genetic component so that it runs in families. At the time I was fascinated by this because it made me wonder at how much more "cryptic" variation there could be in the human population. It seems that face recognition is such a basic and universal "competency" that it is hard to fathom that 1 out of 50 humans would lack the capability. Now the same team has come out with new research reporting that there are individuals at the other end, those who are extremely good at recognizing and remembering faces. Super-recognizers: People with extraordinary face recognition ability:

Here's a figure showing how the three categories relate to each other: 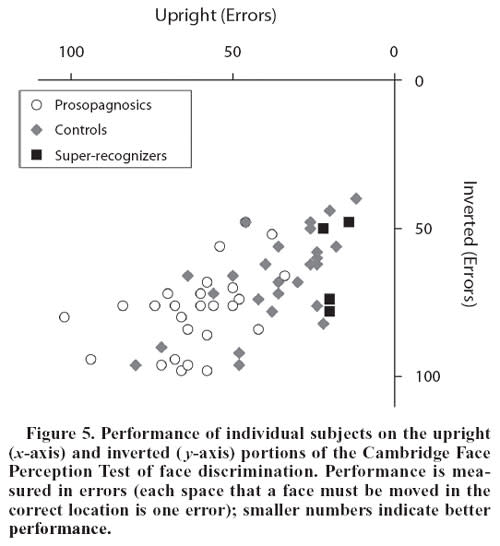 Here's an elaboration from the discussion:

In ScienceDaily they say:

Russell theorizes that super-recognizers and those with face-blindness may only be distinguishable today because our communities differ from how they existed thousands of years ago. "Until recently, most humans lived in much smaller communities, with many fewer people interacting on a regular basis within a group," says Russell. "It may be a fairly new phenomenon that there's even a need to recognize large numbers of people."

Ah, good point. But here's the thing: this sort of ability almost certainly likely tracks other abilities. Traits which exhibit a lot of normal variation, along the Bell Curve, usually don't have strong fitness implications across their states. That is, if the trait has very low fitness in a particular state that state is purged. The variation is probably due then to other factors, from drift to the G-matrix. In any case, some of the anecdotes these people tell about their inability to never forget a face are straight out of science fiction. Though I'm not sure if remembering everyone is actually that convenient, it seems like a form of mental clutter. But what do I know? I'm a neurotypical on this trait.

HealthAnxiety and Depression Relief, No Therapist Required
Recommendations From Our Store