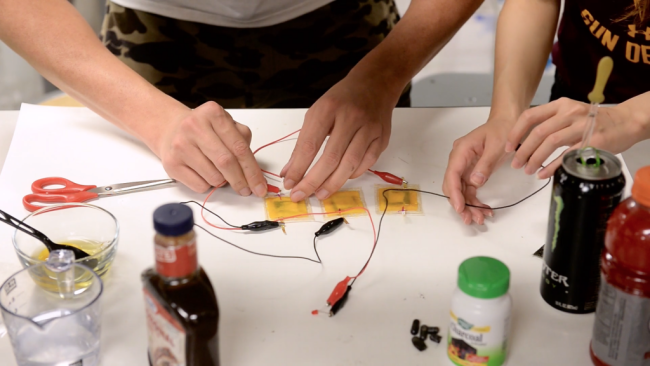 One egg? Check. Water? Check. Carbon pellets? Wait ... The process of making digestible superconductors could almost pass for the Food Network, if not for some fairly esoteric — although completely edible — components. The cheese, egg, carbon and gold "sandwich" created by researchers at Arizona State University could one day power medical devices such as cameras or serve as bacteria-fighting super-foods. What's more, they're made largely from ingredients you can pick up at your local grocery store.

By using store-bought ingredients the researchers created a supercapacitor that can temporarily store and release electricity. These devices are composed of an electrolyte sandwiched between two oppositely charged electrodes. In their design, a form of heat-treated charcoal serves as the electrode, while an energy drink functions as the electrolyte. The outer layer of cheese makes the whole thing a little more savory, while also maintaining a level of electrical conductivity. Their recipe also calls for seaweed, rice paper, gelatin and barbecue sauce — not the most appetizing combination of ingredients, but they work. In addition to being tastier than anything on the market, they say that their unique recipe possesses a higher energy density than other biodegradable electronics. In a series of tests, the researchers charged the supercapacitor and used it to power both an LED and a camera — in a separate video one researcher even pops a bite into his mouth as proof of their design's palatability. In lab tests, the team was able to kill E. coli bacteria using their device, although they have not yet tested it in humans yet. While it is unclear how long the device will remain active in an actual human digestive system, the researchers did immerse the cheese and carbon sandwich in a solution of simulated gastric fluid. In that experiment, the device remained active for four minutes, and had partially dissolved after an hour. They published their study in the journal Advanced Materials Technology. [embed]https://vimeo.com/166585147[/embed]

More Than One Kind of Energy

Popping one of these sandwiches down your gullet (although presumably refraining from chewing) will deliver a source of delicious energy right to your gut, where they could replace the invasive cameras currently used for endoscopies, or perform other health-related tasks. And, when it's done with its job, it just fades away along with the rest of the contents of your stomach. The prototype of the device is about as big as a ketchup packet, but the researchers hope to shrink them down and create a design that can be 3-D printed, paving the way for commercial manufacture of their edible supercapacitor. Medical devices that report on our bodies from the inside already exist, although many of them are non-digestible, the researchers say in a press release. Many ingestible devices are powered by conventional batteries — not something you want floating around your stomach for too long. If something goes wrong and they get stuck or break open, they could do more harm than good. But, by harnessing the conductive abilities of the stuff we already eat, the ASU researchers hope to provide our digestive tracts with a source of electrical energy that's both tasty and effective.