Superbug Arrives in the U.S.

A strain of E. coli that can't be stopped by the last-resort drug. 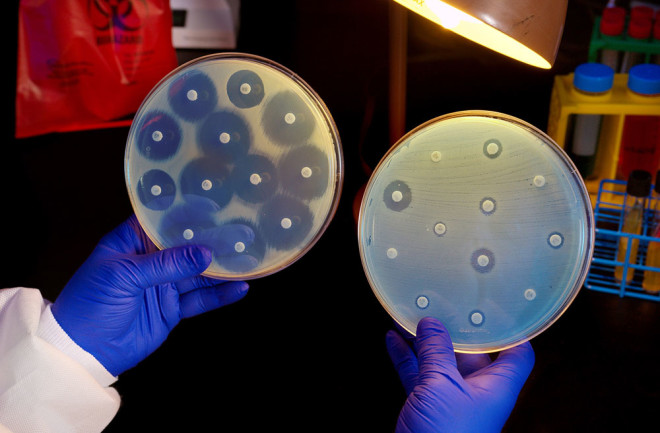 Two petri dish culture plates show the interaction of bacteria and antibiotics (on disks). On the left plate, bacteria around the antibiotic disks fail to grow. But on the right plate, resistant bacteria have no problem growing, despite the presence of antibiotics. | James Gathany/CDC

One of health officials’ biggest fears has come to pass. Bacteria resistant to a medicine considered the last defense against superbugs has been found in countries around the world. And in May, it officially arrived in the United States when a Pennsylvania woman tested positive for it.

The woman was infected with a strain of E. coli that wards off many antibiotics, including colistin, which is considered a last-resort drug. Since her diagnosis, other Americans, as well as U.S. farm animals, have been infected with the bug.

The E. coli strain is a superbug in part because of a gene called mcr-1, which, besides shielding the strain from most antibiotic medications, can travel on a piece of DNA. According to the Centers for Disease Control and Prevention, it’s then shared among other bacteria. The gene’s mobility enables the strain to spread easily among humans and animals.

Without effective antibiotics, even minor infections can be deadly in some people. Conditions like pneumonia and urinary tract infections might be difficult to treat.

“The danger is that we are one step closer to having bacteria that are untreatable with antibiotics,” says Lance Price, director of the Antibiotic Resistance Action Center and a professor at George Washington University.