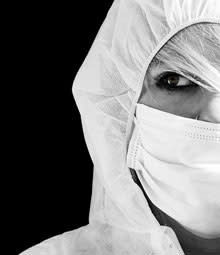 A new study is providing insights into the 2009 swine flu epidemic, and why more serious complications arose in healthy middle-aged people than expected. The researchers say the culprit may be antibodies to seasonal flu found in the seriously ill patients, which might have caused an immune system overreaction in the lungs.

"Nobody really had a good explanation for why middle-aged people seemed to have more severe disease than would have been expected," says Richard Scheuermann, an immunologist at the University of Texas Southwestern Medical Center in Dallas. "This explanation is the first one that I've seen that actually makes sense." [Nature News]

Normally, severe flu illness happens in the very young (who haven't been previously exposed to the flu and don't have protective immunity) and the elderly (who have weakened immune systems). Instead of affecting these groups, the 2009 pandemic H1N1 "swine flu" primarily caused severe reactions in middle-aged adults. The new research

, published in Nature Medicine, studied lung samples from these severely ill patients, to see what might have caused this incongruity. They found a proliferation of antibody complexes that fight flu infection.

Exposure to viruses causes the body to produce antibodies that fight off infection. These proteins continue to circulate in the bloodstream and can recognize new invaders that resemble past pathogens. [Nature News]

But the antibodies in the severely ill patients weren't a match to the H1N1 swine flu virus, they more closely matched a seasonal flu virus strain known as H3N2. Though the antibodies could recognize and attach themselves to H1N1, they couldn't kill the swine flu virus or stop it from replicating. Instead, the hyped-up immune system ran amok--causing inflammation and ruptured capillaries, which filled the lungs with fluid.

The immune system's overreaction, says [Thomas Reichert of the Entropy Research Institute], is "kind of a last-ditch way of handling something.... If we can't identify you specifically enough, but we know there's a lot of you, we're just going to blow the whole damn place up." [ScienceNOW]

Many of the elderly apparently avoided this reaction because they had well-fitting antibodies left over from exposure to an H1N1 virus strain from 1918 (which circulated in the US until 1957 or so). The very young were spared because they were less likely to have the mismatching seasonal flu antibodies, researchers said. While lead researcher Fernando Polack

found both the complexes and mismatched antibodies in these severely ill patients, not all researchers are convinced that the correlation means causation:

"There's no doubt that those immune complexes are there," says virologist Ron Fouchier of the Erasmus Medical Center in Rotterdam, the Netherlands. "The question is, are those antibody complexes there because there's another problem, or are those antibodies there causing the problem?" [ScienceNOW]

80beats: Swine Flu to Be Declared a Pandemic–But It’s Not as Bad as It Might Sound

Discoblog: Worried About Swine Flu? Perhaps Your iPhone Will Save You

DISCOVER: Your Appendix: The Enigma Inside You