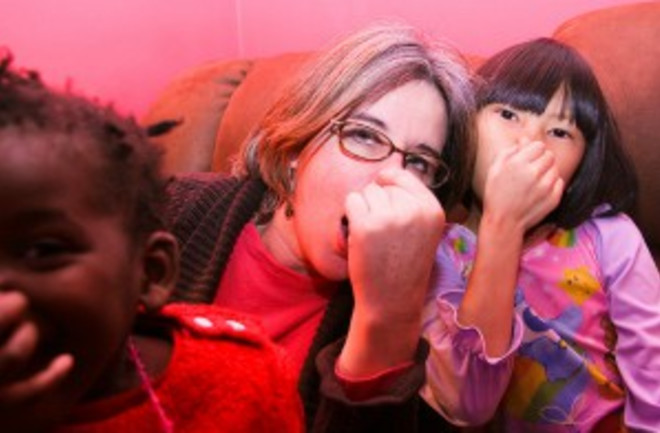 Here's another entry to add to our list of contagious behaviors (which currently includes yawning and driving like an old person): sniffing. In this study, the researchers had participants sit in an "odor clean room" and watch the movie Perfume, which contains "28 movie sniff events (MSEs) where a character takes a sniff" in the first 60 minutes of the film. While the movie was playing, the researchers measured how often the subjects sniffed within 7 seconds of hearing and/or seeing a sniff in the movie compared to all other sniffing. They found that the subjects sniffed along with the characters in the movie, and especially when the sniff was heard without seeing what was being sniffed. The authors speculate that this mirror sniffing could be an evolutionary adaptation, because when you see someone else sniff, "there is 'something important in the air,' and we better find out what it is." Sniff-ty!

Mirror sniffing: humans mimic olfactory sampling behavior. "Ample evidence suggests that social chemosignaling plays a significant role in human behavior. Processing of odors and chemosignals depends on sniffing. Given this, we hypothesized that humans may have evolved an automatic mechanism driving sniffs in response to conspecific sniffing. To test this, we measured sniffing behavior of human subjects watching the movie Perfume, which contains many olfactory sniffing events. Despite the total absence of odor, observers sniffed when characters in the movie sniffed. Moreover, this effect was most pronounced in scenes where subjects heard the sniff but did not see the sniffed-at object. We liken this response to the orienting towards conspecific gaze in vision and argue that its robustness further highlights the significance of olfactory information processing in human behavior." Related content: Flashback Friday: Would a rose by any other name smell as sweet?Flashback Friday: Study proves “old person smell” is real.NCBI ROFL: Men without a sense of smell exhibit a strongly reduced number of sexual relationships.