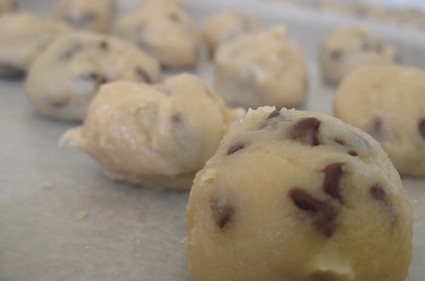 One of the most universally agreed upon facts in the world is that raw cookie dough is delicious. But it can also make you sick, though the ingredient to blame may be a surprise: In study published online in the journal Clinical Infectious Disease, researchers linked the 2009 outbreak of E. coli O157:H7  to tainted flour in Nestlé's Toll House ready-to-bake cookie dough. Although they haven't conclusively pinpointed the culprit, flour is the prime suspect after a detailed traceback investigation, since the other ingredients—including eggs—underwent a "kill step" to eliminate germs. In homemade cookie dough, eggs remain a possible source of contamination, particularly from Salmonella. Regardless of origin, "consumers should not eat unbaked cookie dough," says study author Karen Neil. And that means you, young ladies. In the 2009 outbreak (which affected 77 people and sent about half to the hospital), two-thirds were under the age of 19 and 71 percent were female. But raw flour shouldn't necessarily be demonized as a killer food: Physician William Schaffner tells ABC News that labeling it "risky" may be a bit of a stretch, saying it's similar to eating a rare or medium rare steak. “Eating cookie dough is part of growing up,” Schaffner said. “We know people are going to do it. It’s too delicious.” But he and Neil both say manufacturers should make pre-packaged dough safe to eat before baking. Previous E. coli-related outbreaks have been linked to ground beef, leafy green vegetables, melons, and unpasteurized apple cider. This is the first time the bug has been linked to a pre-packaged product like cookie dough. Reference:Karen P. Neil et al. A Novel Vehicle for Transmission of Escherichia coli O157:H7 to Humans: Multistate Outbreak of E. coli O157:H7 Infections Associated With Consumption of Ready-to-Bake Commercial Prepackaged Cookie Dough—United States, 2009. Clinical Infectious Disease. Published online 8 December 2011. DOI: 10.1093/cid/cir831