The same symptoms for an infant and an older man have separate causes and different consequences. 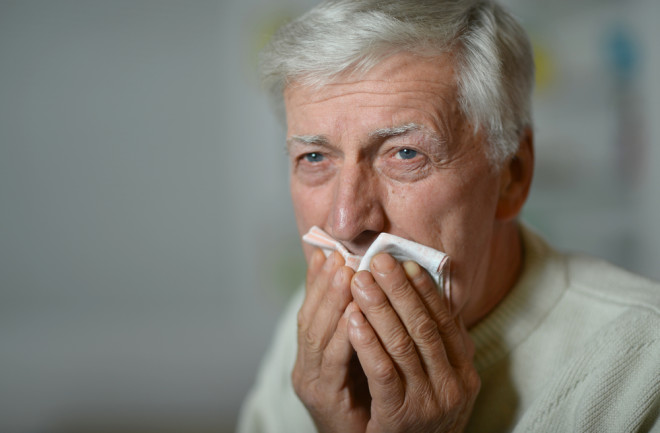 Two patients came in on one January night with the same complaint: shortness of breath, fever, and cough. One had a routine problem, easily treated. The other was close to death.

The first was an 11-month-old boy, who was "coughing and short of breath," according to his chart. His father met me in the hallway. "You've got to come right now, doctor. Didn't the nurses tell you about my son? He's got this terrible cough. He can't breathe."

I felt a flash of terror. Usually I can be sure that if a patient is really sick, the triage nurse will come and find me, but that night I was subbing for someone at a small ambulatory clinic, not a real emergency room. The nurses weren't used to very sick people, especially sick kids.

We hurried down the hallway together. "It's been going on all night," he said.

"The coughing?" I asked.

Worried as I was, I had to bite my lip to suppress a smile. A barking baby? We turned into the room, the father clutching my arm. On a chair next to a playpen an exhausted-looking woman sat staring at a blond boy. He was standing in the playpen, happily hitting her over the head with a stuffed dinosaur, and laughing. He looked like the king of the universe.

The diagnosis was simple: the old "child humiliates parents" syndrome. "I swear doctor, he was dying," the parent tells me, with tears of frustration, while the child sits slurping a Popsicle. Usually I respond with the classic comment made by everyone from the old-time family doctor to the distinguished professor of a prestigious institution: "We see this."

The boy smiled at me, then coughed a little, and when he did, I could hear the faint echo of a bark. "That's the cough," the father said, pouncing.

The father looked disappointed; all this drama had been distilled into one measly word. Actually, two different words exist for the same disease. One is the highbrow laryngotracheobronchitis, the Latin name, sensible and logical, meaning "inflammation of the larynx, trachea, and bronchial tubes." Blunt, plebeian croup, on the other hand, comes from an Old Norse word for "cry" or "shout." You can hear the echo of the barky cough when you say the word.

"Let me tell you what happened," I said. "He's been coughing all night. It got so bad that you both were convinced he was actually dying, so you bundled him up and took him out to the car. By the time you started the car and got down the driveway, his cough had gotten much better, and by the time you got here, it was gone. Unless, of course, you have a heated garage."

They both looked at me, spooked. I was no longer a doctor; I was a witch in a lab coat. There's no magic; the explanation is reasonably simple. Croup is an infection of the airway commonly caused by a virus. When the virus sets up shop in the trachea just below the level of the larynx, inflammation causes the soft tissues of the trachea to narrow, disturbing the airflow and creating a whistling sound called stridor (Latin for "creak") as well as that unmistakable barky cough.

As for treatment—well, this is where a little magic comes in. Humidified air seems to help reverse the swelling of the tissue. Cool, moist air is even better. Often that's all you need. Where to get cool, moist air? You can go out and buy a $50 cool-mist vaporizer, but if you've taken the baby along with you, you've already done the job. With a few breaths of outdoor nighttime air, which is usually colder and moister than indoor air, the swelling in the trachea will improve dramatically and relieve the breathing problems.

Croupy kids are common. On a winter's evening you usually hear that barky cough echoing down the hallway of every ER in the country. So I wasn't surprised when I heard it again as I walked back down the hallway.

But when I peeked into room 3, I froze. On the gurney, sitting bolt upright, was a middle-aged man in a peculiar posture: chin up, neck thrust out, mouth "ohh-ing" as he fought for air. With each breath you could hear a flutelike sound, signaling an airway about to close.

Conditions other than croup can cause that rasping—stridor—but those diseases are far more serious. They can kill. "Can we get the code cart in here!" I shouted down the hallway.

In a sliver of a second I was confronted with a patient who needed a breathing tube inserted immediately. The only way to do this was to use the same hole that was getting him into trouble, a hole that was growing smaller by the minute, a hole that might already be too small to intubate. The only way to know was to try. But this was a clinic, not an ER. We had no respiratory technicians and maybe two tanks of oxygen.

Every clinic should have airway supplies, but it doesn't always have staff that know the equipment well. If I couldn't get a tube down the patient's throat, there would be only one alternative: a cricothyrotomy, or "cric."

In this procedure I would try to bypass the larynx, or voice box, by making an incision in the neck below the Adam's apple that would open into the trachea beneath the level of obstruction. I would need to cram a plastic breathing tube through this hole. If I went too high or too low, I would hit the thyroid artery. I've done every possible procedure in the ER, and crics are the only ones that really scare me.

The staff had gathered in a knot at the door, terror on their faces. Finally someone brought in a fishing-tackle box that held the airway equipment. The room was silent.

The guy had a small chin and buckteeth, so he would be hard to intubate, even in the best of circumstances. The clinic's endotracheal tubes were a weird, off-brand type that I see every so often and don't like. The Ambu bag for pumping air had a funny plastic handle.

Tubes for creating an airway come in different sizes. The bigger ones are used for men, and they have cuffs, little balloons at the base of the tube that you inflate to close off the air space around the tube. These cuffs should be tested—inject 10 cc's of air, then squeeze the balloon to see if it holds. The test seems so beside the point when you have someone right next to you dying. It's like checking the air pressure in the tires of a car on fire.

As I did this, I tried to calm the frightened crew. You do this by being very specific. "Nancy, I want you to go to the drug box and take out 10 milligrams of diazepam. Patsy, I want you to hold the Ambu bag."

I chose one of the smaller tubes. Next I took a stylet, a long wire encased in plastic, and fitted it down the tube. This stiffens the tube, makes it easier to guide, and gives a hockey-stick-style curve to the terminus of the tube. Next, the laryngoscope—a flashlight with a big scoop at one end. You use this to scoop the tongue out of the way.

I was looking deep into the larynx, but I saw nothing that resembled vocal cords—only beefy-looking soft tissue. I repositioned the handle. There was nothing. Again and again, nothing. I would have to guess where the trachea was.

I took aim and straightened up. I must have got it in because I could see the faint pulse of condensed air within the tube. I high-fived the startled lab tech, who was fumbling with the Ambu bag. We had just saved the guy's life.

Once you've opened the airway, treating the cause is a walk in the park. But what was the difference between my two patients? Why did the baby do so well and this gentleman end up in trouble? Well, stridor is a sign; it signals the narrowing of the trachea. Croup is just one possible reason, albeit the most common in little kids. For other causes, imagine an infection that festers and forms an abscess, filling up the trachea. Or imagine a little plastic fast-food giveaway accidentally inhaled by a toddler.

Or imagine an allergic reaction in which the tongue and the lining of the throat swell until the patient finally strangles to death—unless you get a breathing tube in. This patient turned out to have epiglottitis, a bacterial infection of the flap of cartilage that closes off the larynx and protects the airway during swallowing.

I was on my way to request the patient's transfer to a nearby hospital when I stumbled into Croup Baby and family. The boy was dressed and loaded into his car seat, where he was angelically sleeping like a baby.

"I want to thank you so much, doctor," the mother burbled, "for everything you've done."