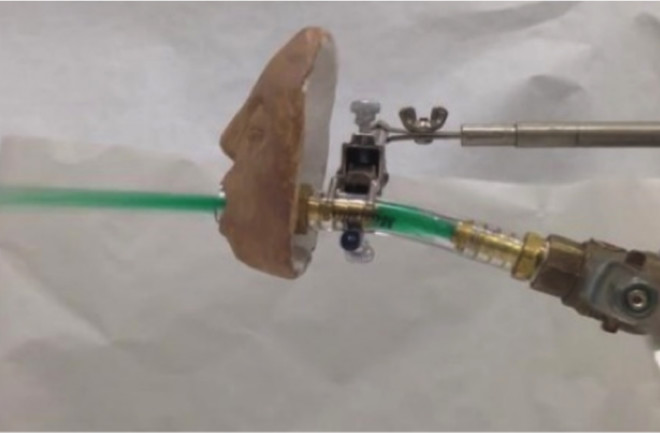 Fig 2. Photo of a Simulated Vomiting Episode. Projectile vomiting of colored simulated vomitus matrix. When a friend has a stomach bug and you hold her hair back while she blows chunks, are you at risk for inhaling aerosolized virus? Well, that's exactly what these scientists wondered. But who wants to spend months hanging out at the hospital in the hopes that someone with a stomach bug walks in and lets you measure how many viral particles get aerosolized when they puke? Let's just go ahead and say (or hope) no one. So, to answer the question, these scientists built a vomit machine--that even included a face--to replicate what happens to the chunks that get blown when we hurl. But what to put in the vomit machine? Why, artificial vomit of course! (And virus. Don't forget the virus.) Finally, to measure the amount of aerosolized virus, they collected air samples from a plexiglass box that surrounded the "face" of the vomit machine. The result of these shenanigans? Well, lets just say the harder they puke, the worse your chances are.Aerosolization of a Human Norovirus Surrogate, Bacteriophage MS2, during Simulated Vomiting. "Human noroviruses (NoV) are the leading cause of acute gastroenteritis worldwide. Epidemiological studies of outbreaks have suggested that vomiting facilitates transmission of human NoV, but there have been no laboratory-based studies characterizing the degree of NoV release during a vomiting event. The purpose of this work was to demonstrate that virus aerosolization occurs in a simulated vomiting event, and to estimate the amount of virus that is released in those aerosols. A simulated vomiting device was constructed at one-quarter scale of the human body following similitude principles. Simulated vomitus matrices at low (6.24 mPa*s) and high (177.5 mPa*s) viscosities were inoculated with low (108 PFU/mL) and high (1010 PFU/mL) concentrations of bacteriophage MS2 and placed in the artificial “stomach” of the device, which was then subjected to scaled physiologically relevant pressures associated with vomiting. Bio aerosols were captured using an SKC Biosampler. In low viscosity artificial vomitus, there were notable differences between recovered aerosolized MS2 as a function of pressure (i.e., greater aerosolization with increased pressure), although this was not always statistically significant. This relationship disappeared when using high viscosity simulated vomitus. The amount of MS2 aerosolized as a percent of total virus “vomited” ranged from 7.2 x 10-5 to 2.67 x 10-2 (which corresponded to a range of 36 to 13,350 PFU total). To our knowledge, this is the first study to document and measure aerosolization of a NoV surrogate in a similitude-based physical model. This has implications for better understanding the transmission dynamics of human NoV and for risk modeling purposes, both of which can help in designing effective infection control measures." Related content: NCBI ROFL: Study finds that watching 3D movies makes 54.8% of people want to vomit. NCBI ROFL: Frog barf iinnnn spaaaaaaace!!! NCBI ROFL: Pleasure and pain: the effect of (almost) having an orgasm on genital and nongenital sensitivity.