The idea of stochastic training wheels sounds a bit scary, but I am alluding to the series of posts on stochastic dynamics adapted from chapter 5 of Evolutionary Genetics: Concepts & Case Studies by John Gillespie. Using Gillespie's terminology the posts were: Boundary ProcessOrigination ProcessGenetic DriftGenetic DraftRandom Environment There was also another factor which Gillespie points to, which didn't have a particular section and rather loomed over all the other parameters, and that was Deterministic Selection. 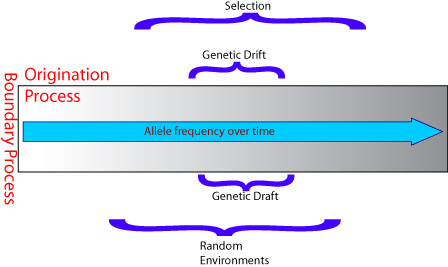 Of Gillespie's parameters only one is highly dependent on the population size, genetic drift. Like R.A. Fisher Gillespie tends to dismiss the impact of drift as a stochastic force, mostly I suspect because it is the one we are taught first. The idea that generation to generation sampling variance is inversely proportional to the sample size is intuitively understandable. Flip a coin enough times and you get a progressively better reflection of the expected 50/50 chance of heads or tails. In contrast, genetic draft, which though random in its effects on the hitchhiking allele (that is, the hitchiking allele is randomly selected from the sample space of alleles in its proximaty to the de novo positively selected mutant) is driven ultimately by selective forces, which are far less susceptible to population size. The origination and boundary processes are both rather enigmatic, and because of their ephemeral nature almost impossible to capture empirically. But Gillespie makes a concerted effort to emphasize the importance of the first few generations, and their relatively insensitivity to both population size and selection. Finally, the treatment of environmental stochasticity is somewhat perplexing as the formalism tends to come to cross-purposes and offers us little in the way of unambiguous insight. It seems that random environmental change looms over many of the "random" variables lurking in the other parameters, e.g., and "act of god" which reduces effective population and so makes genetic drift all the more salient, or another environmental shift which though intrinsically random has a significant selective effect and induces a sweep which results in genetic draft (that is, a stochastic event which results in directional selection which induces stochastic hitchhiking, wheels within wheels!). In the end one must take a step back, and remember that the parameters and models on display here are "classical" population genetic ones insofar as they are are attenuated down to one or two loci, and one or two alleles. In the "Post-Genomic Era" they seem quite qaint, as their parsimonious formalism is not simply by design, but rather emerges from the constraints of the pre-molecular and pre-computational experimental era. Before molecular assays obviously it was important to find visible, large effect traits, which could be tracked in animals who might not have had the fastest generation times. Much of the original work by Fisher, J.B.S. Haldane and Sewall Wright was theoretical out of necessity, there just wasn't that much data out there which could be easily analyzed through a reductionistic population genetic lens. Quantitative traits existed of course which were clearly heritable, but in the pre-DNA age there was no chance of detecting genes that underlay the phenotypes since the biophysical nature of the genome was barely elucidated at that time. Things have changed, and yet here Gillespie is reviewing simple models using one or two loci, so what gives? In the chapter itself Gillespie points out that these models are aids to further learning, and at the end he gives the game away and offers up genomics and bioinformatics as the tools which may lead us to the keys to the kingdom. Obviously evolutionary dynamics aren't well modeled by one or two locus systems in many cases, especially when these models often work in the background of massive selection coefficients, and the interdependencies of the parameters are not easily accounted for (consider the peculiarities of a mutational meltdown induced by mass truncation selection that increases genetic drift because of reduced census size, and causing drift to swamp selection!). But, as Gillespie notes these simple models are the tips of the icebergs, baby steps upon which reality can be constructed. The existence of massive noncoding regions in the genome, horizontal gene transfer between species in bacteria, and the nature of amino acid codons, are all important factors to keep in mind, but these simple models with their parameters are reifications which have some utility in allowing us to capture the range of biological dynamics. Unlike thermodynamics, which Fisher used as a model to formulate his original system, biology is characterized by a great deal of variation across taxa in regards to the power and nature of various dynamics (e.g., consider the role of gene splicing in eukaryotes vs. the tight nature of transcription and translation in prokaryotes). Just as verbal models fail to capture the nuance and subtly of biology, so these formal models are rather poor fare. So shall we be silent because we can not speak? On occasion the empty words of the present become meaningful over time, and so it is that ideas which exhibit a poverty of description, like genetic draft, may hold the seeds of explaining important biological patterns (e.g., Lewontin's Paradox).