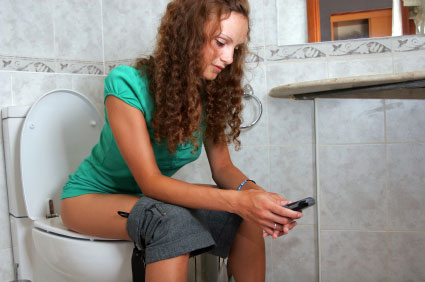 Pee-on-a-stick sexually transmitted disease tests could be making their way onto pharmacy shelves and bathroom vending machines in the UK soon. And in this system, a cell phone can take the place of a clinic doctor. The country's burgeoning STD problem has got doctors thinking about ways to make testing quicker, easier, and less embarrassing. One answer: A pee-on-a-stick test that could be connected to your computer or mobile phone to provide results, and treatment advice, within minutes. This has been heralded as a "pee on your phone" test, but of course it would be neater and better for your electronics if you pee first, then plug in. If this new home testing procedure could make diagnosis and treatment of these all-too-common ailments easier, it would hopefully reduce their spread and prevalence, said Dr. Tariq Sadiq, who is leading the group developing the new testing strategies. He talked to The Guardian about sexually transmitted infections (STIs), as the Brits call them:

"We need to tackle the rising epidemic of STIs, which have been going up and up and up. Britain is one of the worst [countries] in western Europe for teenage pregnancy and STIs. That there's a major embarrassment factor here, especially among young people, makes the situation worse."

The idea comes from the UK Clinical Research Collaboration, a consortium looking for ways to make STD testing available and affordable for the affected populations--who are often young and often mobile phone addicts, Sadiq told The Guardian

"Your mobile phone can be your mobile doctor. It diagnoses whether you've got one of a range of STIs, such as chlamydia or gonorrhea and tells you where to go next to get treatment," said Dr Tariq Sadiq....

Diagnostic sticks for chlamydia, gonorrhea, and herpes are estimated to cost a little over a dollar, and could be sold in pharmacies and vending machines in night clubs. A worried person would take the test by peeing or spitting on the computer chip-enabled diagnostic stick, connecting it to their phone or computer, and would get the results in minutes. (This microfluidic device sounds similar to other "lab-on-a-chip" devices

under development.) The mobile or computer app could also recommend doctors. The details and implementation of the testing technology is still being worked out, and researchers want to address privacy-related questions to ensure the tests are anonymous and patient information can't be leaked, Sadiq told Gizmag

"The required technology is very close to becoming a reality," said Dr Sadiq. “But there are other issues we need to address before we can use devices in the community – confidentiality and data protection, for example, are supremely important. It will also be vital to have tests that can be easily adapted to detect newly identified STIs, as all the causes of sexually transmitted diseases have still not been discovered."

Discoblog: First Rule of Being a Successful STD: Make Sure the Host Still Has Sex

80beats: Diagnostic Lab Made of Paper and Tape Could Lead to a 3-Cent HIV Test

80beats: Check Your Inbox, You May Have an STD

DISCOVER: How Often Do Animals Get STDs?