Spy on the Inside: What's Cooking Inside Homeland Security's Pathogen Lab?

The federal lab on New York's Plum Island studies some of the world’s most threatening pathogens.

Fernando Torres-Vélez waits for samples in the darkness by a helicopter landing pad on Plum Island. Situated 1.5 miles from the eastern tip of Long Island, the island’s 840 acres of wildlife surround a handful of high-security laboratories run by the Department of Homeland Security to combat livestock diseases and bioterror threats. 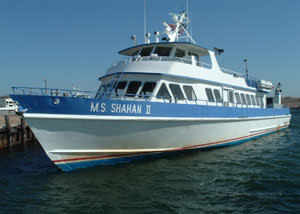 Plum Island is accessible only by government-authorized ferry. | NULL

Torres-Vélez, a veterinary pathologist, takes a ferry here five days a week as head of the Foreign Animal Disease Diagnostic Lab. But tonight is different. A veterinarian at the New York State Fair has reported a cow with symptoms of foot-and-mouth disease (FMD)—a virus that leaves livestock covered with lesions, too emaciated to produce milk or meat, and so contagious that an outbreak would halt all dairy and beef production in the U.S. When the helicopter lands, Torres-Vélez receives the cow’s saliva sample and rushes to his lab. Within four hours his team has ruled out FMD.

Plum Island is a biosafety level 3 lab, equipped to deal with diseases that don’t infect humans but are contagious and possibly fatal in animals. Vaccines developed here could stop viral outbreaks in the U.S., as well as in India, Pakistan, and Afghanistan—nations where FMD still poses a threat.

Given the stakes and the intrigue, Plum Island has gained a reputation for being secretive and covert. That may be deserved. A recent visitor found scientists eager to discuss their work yet careful to abide by public relations rules not to say too much. Photography was restricted unless an escort directed the camera. (Verboten: photographing the ferry dock from the Long Island side.) And yet soon Plum Island may be superseded. Within a decade, the lab is expected to move to a brand-new biosafety level 4 facility in Kansas, where scientists can study Nipah virus encephalitis and other livestock diseases that could be fatal to humans. Plans for the facility are stacked on Torres-Vélez’s desk.

The U.S. Government monitors over 100 animal diseases, including anthrax and rabies. If a foreign disease (one that's not endemic to the U.S., such as foot-and-mouth disease) is detected, the saliva sample in question is helicoptered to Plum Island for analysis, where one person has permission to receive it. Employees must be on call 24 hours a day. Disclaimer: The numbered areas below are based on author memory. Plum Island would not confirm locations.

If a bioterrorist is suspected to have infected the U.S. with a livestock virus such as African swine fever, rinderpest, or foot-and-mouth disease (FMD)all highly contagious and potentially devastatingthe FBI will send forensic scientists to Plum Island. How the U.S. would handle an outbreak is undisclosed. In 2001 FMD infected cows in England. To contain it, fields of cows were burned, and up to $10 billion was lost in food and tourism.

Entering or exiting a biosafety level 3 facility like Plum Island’s livestock lab requires following strict protocol. The exit procedure: Place used clothing in hampers; blow your nose in a tissue; clear your throat and expectorate to remove mucus, which may contain particles inhaled in a lab; place glasses in the decontaminating solution for three minutes; take a full-body shower.

Men shower here after leaving the biosafety level 3 area and the animal labs. The shower rinses off live virus particles that could infect livestock back home. When working in these areas, employees leave their civilian clothes behind, donning full lab attire that exposes only their face, neck, hair, and hands.

Pigs, sheep, and cows take part in experiments to cure disease. A recent Plum Island accomplishment: the first molecular vaccine for foot-and-mouth disease, approved for use in U.S. cattle this June.

Lab 257 is an abandoned building across the island from the current center. It was intended to house biowarfare research by the Army, but the project was canceled in 1952. Instead, the government studied animal diseases there before mothballing the building in 1995. Its mystery and inaccessibility have sparked many rumors.

Rumor: West Nile virus was released by Plum Island before the 1999 outbreak on the East Coast the first appearance of the deadly illness in the U.S. The lab denies this but says it assisted after an outbreak of West Nile in horses on Long Island. Researchers collected samples and aided in development of an equine vaccine.

Rumor: Grotesque creatures were created by Plum Island researchers. The lab says its research is unclassified, and no such entities have been created.