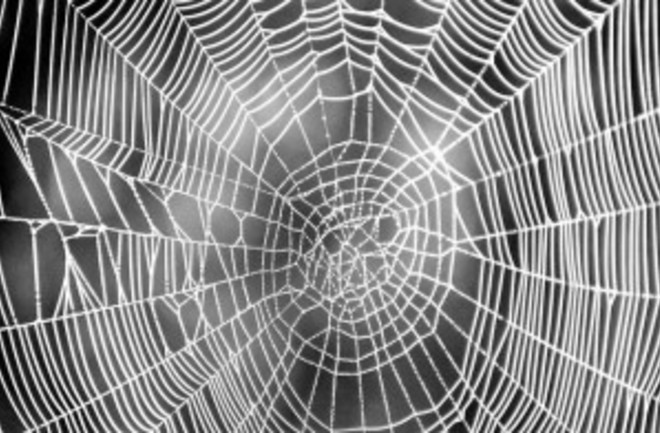 If you think love in the animal world is sweet, think again! From ducks who rape using corkscrew penises to a bedbug who "pierces the female’s abdominal wall with his external genitalia and inseminates into her body cavity" to spiders who self-castrate in order to fight harder, animal sex can be, well, beastly. But this study takes things to a new, and horrible, level. Here, scientists report that male orb-weaving spiders perform genital mutilation on females to ensure they never mate with another male. Yes, you read that right. Apparently, spider genitalia interlock during sex, and once the deed is done, the female's external parts are removed, leaving her sterilized. The researchers go on to predict that this happens in at least 80 other species. Yikes!

"Competition between males and their sperm over access to females and their eggs has resulted in manifold ways by which males try to secure paternity, ranging from physically guarding the female after mating to reducing her receptivity or her attractiveness to subsequent males by transferring manipulative substances or by mechanically sealing the female reproductive tract with a copulatory plug. Copulations may also result in internal damage of the female genitalia; however, this is not considered as a direct adaptation against sperm competition but as a collateral effect. Here, we present a drastic and direct mechanism for securing paternity: the removal of coupling structures on female genitalia by males. In the orb-weaving spider Larinia jeskovi males remove the scapus, a crucial coupling device on the female external genital region. Reconstruction of the coupling mechanism using micro-CT-scanned mating pairs revealed that several sclerites of the male genitalia interact to break off the scapus. Once it is removed, remating cannot occur due to mechanical coupling difficulties. In the field, male-inflicted genital damage is very prevalent since all female L. jeskovi were found to be mutilated at the end of the mating season. External genital mutilation is an overlooked but widely spread phenomenon since 80 additional spider species were found for which male genital manipulation can be suspected. Interlocking genitalia provide an evolutionary platform for the rapid evolution of this highly effective mechanism to secure paternity, and we suspect that other animal groups with interlocking genital structures might reveal similarly drastic male adaptations." Related content: NCBI ROFL: Bats eavesdrop on the sound of copulating flies. NCBI ROFL: Traumatic insemination and sexual conflict in the bed bug Cimex lectularius. NCBI ROFL: Hard core spiders fight better after self-castration.