Spider sex is kinkier than you thought! 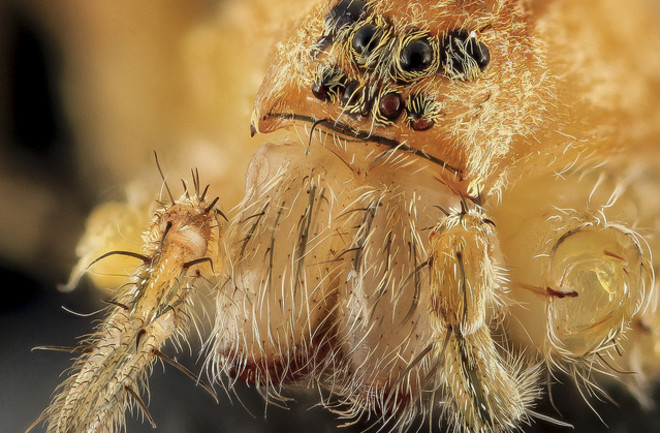 Image: Flickr/USGS Bee Inventory and Monitoring LabYou've probably heard of species of spiders whose females will eat males during sex. But did you know that in some of these species, the males will try to protect themselves by binding the females' legs with silk before copulation? It's true, and according to this study, it has led to the evolution of males with longer legs to help restrain females. In other words, an arms race--or to be more specific...a legs race.Benefits of size dimorphism and copulatory silk wrapping in the sexually cannibalistic nursery web spider, Pisaurina mira. "In sexually cannibalistic animals, male fitness is influenced not only by successful mate acquisition and egg fertilization, but also by avoiding being eaten. In the cannibalistic nursery web spider, Pisaurina mira, the legs of mature males are longer in relation to their body size than those of females, and males use these legs to aid in wrapping a female's legs with silk prior to and during copulation. We hypothesized that elongated male legs and silk wrapping provide benefits to males, in part through a reduced likelihood of sexual cannibalism. To test this, we paired females of random size with males from one of two treatment groups—those capable of silk wrapping versus those incapable of silk wrapping. We found that males with relatively longer legs and larger body size were more likely to mate and were less likely to be cannibalized prior to copulation. Regardless of relative size, males capable of silk wrapping were less likely to be cannibalized during or following copulation and had more opportunities for sperm transfer (i.e. pedipalpal insertions). Our results suggest that male size and copulatory silk wrapping are sexually selected traits benefiting male reproductive success." Related content: Google search patterns reveal human mating season.Insect fossil porn: Jurassic edition.How to use bug sex to forecast the weather.