I mentioned offhand to Trey of Genomes Are Us that I'd look around for the effect of adoptive environments on criminality (what with the recent concern about studying the genetics of criminal predisposition). Luckily I have Steve Hsu in my RSS, as he posted something of interest just yesterday, pointing me to this paper, The environments of adopted and non-adopted youth: evidence on range restriction from the Sibling Interaction and Behavior Study (SIBS):

Previous reviews of the literature have suggested that shared environmental effects may be underestimated in adoption studies because adopted individuals are exposed to a restricted range of family environments. A sample of 409 adoptive and 208 non-adoptive families from the Sibling Interaction and Behavior Study (SIBS) was used to identify the environmental dimensions on which adoptive families show greatest restriction and to determine the effect of this restriction on estimates of the adoptive sibling correlation. Relative to non-adoptive families, adoptive families experienced a 41% reduction of variance in parent disinhibitory psychopathology and an 18% reduction of variance in socioeconomic status (SES). There was limited evidence for range restriction in exposure to bad peer models, parent depression, or family climate. However, restriction in range in parent disinhibitory psychopathology and family SES had no effect on adoptive-sibling correlations for delinquency, drug use, and IQ. These data support the use of adoption studies to obtain direct estimates of the importance of shared environmental effects on psychological development.

The technical issue here is that there's long been the assumption that because adoptive families are pre-screened they're a selection-biased environment which won't exhibit the same environmental variance as the general population. This matters potentially for behavior genetics studies which use adopted children, as it might underestimate shared environmental effect (a robust behavior genetic finding that puzzles many is that most of the environmental effect is non-shared). I'm not too focused on this specific issue, but rather want to pass along two charts which might interest readers: 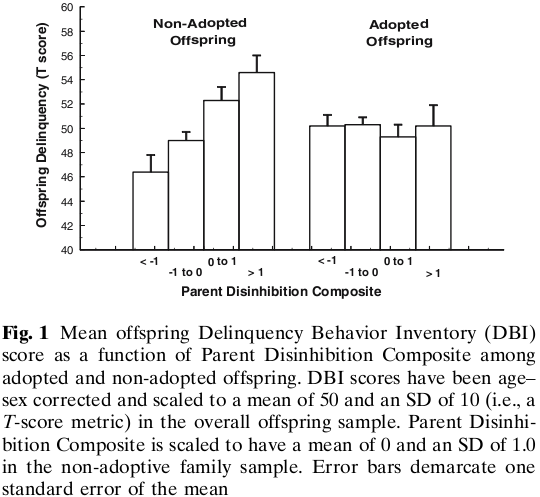 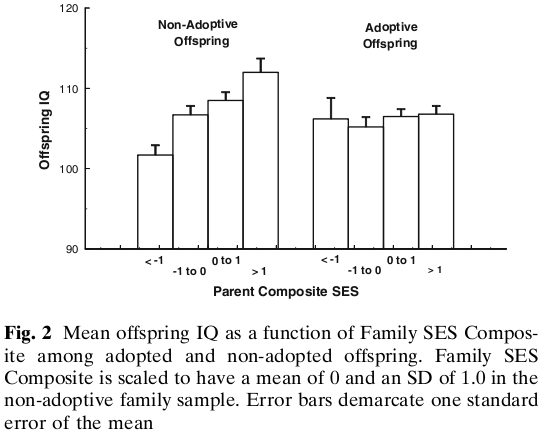