Sneezy After Sex? You Could Have Post Orgasmic Illness Syndrome 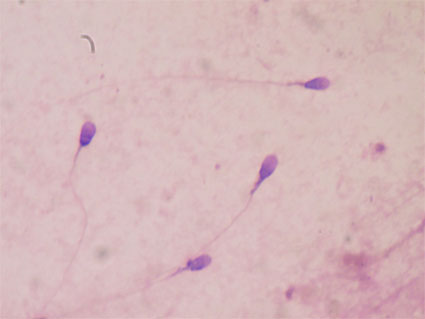 If you experience feverish, burning-eyed orgasms, don't rejoice--you should probably consider visiting your doctor. Scientists believe such flu-like symptoms arise when men are allergic to their own semen. It's called post orgasmic illness syndrome (POIS). Although the term has been around since 2002, researchers led by Marcel Waldinger, a professor of sexual psychopharmacology at Utrecht University in the Netherlands, have for the first time shown that some men suffer from a semen allergy. Such men, after ejaculating, not only have burning eyes and fever-like feelings that can last for a week, but also feel as tired as post-marathon runners and have noses that run faster than Usain Bolt. In one study published in the Journal of Sexual Medicine this week, the researchers pricked the skin of 33 POIS-diagnosed men with their own diluted semen, and discovered that nearly 90 percent of them had allergic reactions as a result. As Reuters reports:

"These results are a very important breakthrough in the research of this syndrome," Waldinger said in a telephone interview. He said the findings "contradict the idea that the complaints have a psychological cause" and show that an auto-allergic reaction to semen is the most likely cause.

by Waldinger published in the same journal outlines a promising treatment for those afflicted by semen allergies: hyposensitization therapy. As part of this therapy, men were injected with their own semen in evermore concentrated strains over the course of three years, which the researchers found gradually reduced their post-orgasmic symptoms. This treatment also paves the way for wonderfully awkward conversations opening with the words, "So, my doctor gave me my semen shot today..." With publishing this research, the scientists hope that the public--including doctors--becomes more aware of POIS, making it easier for men (who are already known for shying away from doctor visits) to approach their physicians if they think they're suffering from it. But until this semen syndrome becomes more well known, I wouldn't suggest calling in sick from work because of it--that is, unless you're comfortable explaining to your boss that today's sick leave stems from last night's orgasm. Related Content: Discoblog: Gesundheit! For Some, Sex Causes Uncontrollable Sneezing