Small Comfort: Cockroaches, Too, Get Fat on an Unbalanced Diet 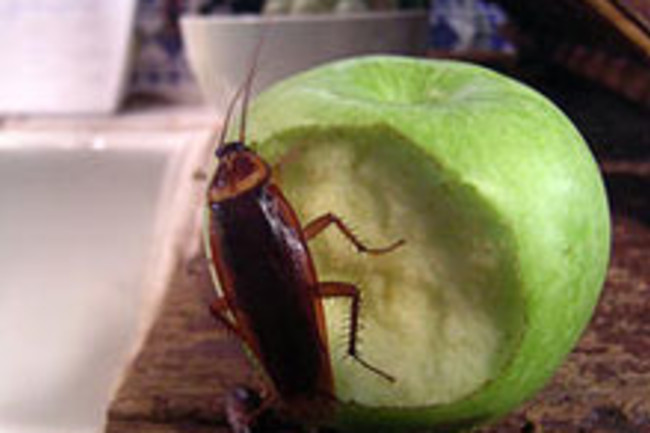 We already knew that a diet based on junk food is bad for people and crows. Now a study shows that the health of cockroaches also suffers when the critters eat an unbalanced diet. In fact, roaches fed a poor-quality diet matured more slowly and were fatter than those fed a well-balanced one. Females who ate badly also were less willing to mate than their well-nourished peers. LiveScience reports:

[Researchers] picked young female cockroach nymphs and divided them into two dietary groups. Half were fed a good-quality balanced diet of protein-rich fish food and high-carbohydrate oatmeal, while the rest were raised on fish food only. Both groups were allowed to eat as much as they wanted....When the nymphs became adults, the team switched the diets of some animals. Half of the cockroaches raised with good quality diet lost their oatmeal, while half of the bugs fed poorly were promoted to a good-quality diet. Eighteen days after the switch, the diet control ended and some of the surviving cockroaches were dissected. The effects of unbalanced meals continued throughout the cockroaches' lives, even for the few that were switched to good-quality food.

So now we know that even roaches can suffer from a poor diet. The question is, will it do us any good? Related Content: Discoblog: Just Like Humans, Crows Embrace Junk Food…and Pay the Price Discoblog: For Impulsive Eaters, Losing Weight Is a Guilt Trip Away Discoblog: Worst Science Article of the Week: Are Sugary Snacks Actually Good for Kids? Image: flickr / Neil T