It's all about the seminal proteins. 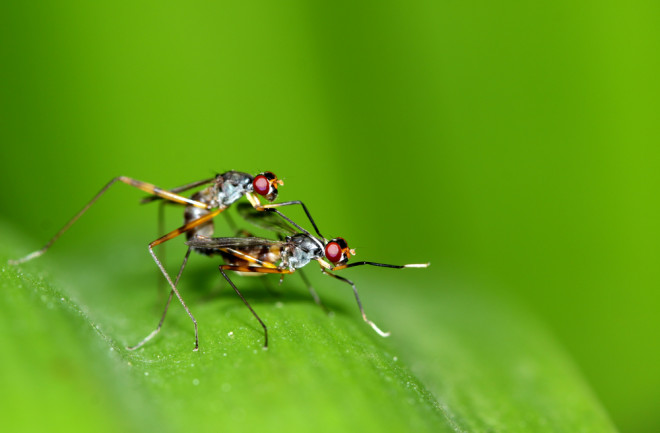 Let’s wallow in semen a little while longer, shall we? We have already seen that, even in humans, there is more to this substance than meets the eye. It contains proteins that, when mixed together, can forge a mating plug. It also contains sugars as sperm fuel, proteins that protect the sperm cells from the acidic vaginal environment, zinc that keeps the sperm’s DNA in good shape, and chemical compounds that prevent the sperm cells from becoming overenthusiastic prematurely.

But this list of ingredients is just the tip of the iceberg. Human ejaculates are home to hundreds of different proteins (which in certain women cause a kind of “sperm hay fever,” an allergic reaction to semen). And those are not trace amounts either; most of them occur in considerable concentrations, so they must be doing something important — we just don’t know what. Even in the ejaculate of the lowly banana fly Drosophila melanogaster, researchers have identified no fewer than 133 different kinds of proteins. One hundred and thirty-three! And this excludes the many proteins that are in the sperm cells themselves. These 133 are all produced by the banana fly version of the prostate, which releases them into the liquid portion of the semen.

Fortunately, banana flies being the lab biologist’s workhorse, we know quite a bit about what their seminal proteins do — or at least more than we know about their human counterparts.

To begin with, we know that they evolve as fast as the genitalia that deliver and receive them. Rama Singh of McMaster University in Hamilton, Canada, has been studying the protein cocktails in different species of banana flies and has discovered that the DNA codes for these genes, while remaining functional, are constantly and rapidly changing along the branches of the banana fly evolutionary tree. “The fastest evolving proteins we know,” he says. And a sure sign they are perpetually pushed around by sexual selection.

Banana fly researchers are quite confident that some of the ingredients of these biochemical cocktails are involved in a kind of neuropsychological manipulation. They hijack a female’s hormonal system by shutting down her sex drive, causing her to go completely off males for up to several days after having received a load of semen. Females that have recently been inseminated start kicking away their suitors or, when harassed, extend their egg-laying tube, which blocks access to the vagina. They even begin exuding a scent that renders them unattractive. All this is induced by semen components that end up in her bloodstream.

Usually, females prefer to have multiple fathers for a clutch of eggs — to generate healthy genetic diversity. But by usurping a female’s decision to add other males’ sperm to the mix that she is using to fertilize her eggs with, a male thus can prevent sperm competition. The whole process is akin to leaving a mental mating plug.

One of the substances that have such an “antiaphrodisiac” effect is sex peptide, a small protein molecule — small enough to pass straight through the wall of the vagina into the female’s bloodstream — that is produced in the glands that sit next to a male fly’s genitalia. It is present in the semen but also sticks to the tails of the sperm cells.

The sex peptide that is floating free in the semen does its work quickly: even before mating is fully over, it has already seeped through the vagina wall into the female’s blood, and within minutes begins to stick to receptors near her brain, where it makes the female’s interest in other males plummet. For up to seven hours, the initial shot of sex peptide causes females to give males the cold shoulder. Meanwhile, the sex peptide that sits on the sperm tails is beginning to break free, sustaining a steady IV drip of antiaphrodisiac that lasts for about a week — enough time to give the sperm a free passage, unchallenged by other males’ sperm.

Sex peptide is only one of the multitude of chemical compounds in semen that a female banana fly receives each time she mates with a male. What do the rest do? Well, research in other insects can give us an inkling of what such substances might be capable of.

The semen of the American fire beetle Neopyrochroa flabellata, for example, is spiked with the poisonous compound cantharidin. Although in the human world this substance is known as the infamous aphrodisiac “Spanish fly,” the benefit gained by the male fire beetle is not his mate’s increased ardor, but rather the fact that the stuff ends up in the eggs fertilized by his sperm, which protects them against being eaten by ladybird beetles.

Another substance, the protein PSP1, is ejaculated by the male corn earworm moth into his mate and there immediately shuts down the production of pheromones, meaning that other males (which totally rely on scent) can no longer find her.

And then there’s Argas persicus. In this tick, believe it or not, the male produces a soda-bottle-like spermatophore from his genitalia, takes it into his jaws, bites off the cap, and then sticks it, neck first, into the female’s vagina. The appearance of carbon dioxide bubbles inside the spermatophore then forces out the sperm and other contents into the female. And at least one of these contents is a compound that cranks up the female’s egg production rate — which may mean more offspring to be sired by these sperm.

This list makes one wonder whether some of the many proteins in human semen could also have such manipulative effects. If they do, then this would be one way to explain the results of a study by Gordon Gallup and Rebecca Burch. In this study, they had almost three hundred female students fill out questionnaires relating to sex and mental health. The results showed that women who always use a condom — and so are protected against the effects of proteins in the semen — score almost 50 percent higher on a scale of depression-related symptoms than women who never use condoms, which might indicate (but doesn’t prove) that substances in semen interfere with the female nervous system.

And there is also evidence that pregnant women who have unprotected sex with their partner during pregnancy are less likely to suffer from so-called preeclampsia than women who use a condom. Since preeclampsia is a kind of inflammation of the woman’s body induced by her fetus — basically the mother becomes allergic to her own child — this might mean that substances in the semen take over part of the regulation of the woman’s immune system.

It seems that semen may be full of manipulative substances: the male using the female’s reproductive system to wage a chemical warfare against her reproductive autonomy or even, in an act of evolutionary paranoia, against potential future competitors.